Chinese parents hesitate over sending children to US for education amid fraying ties, COVID-19 pandemic 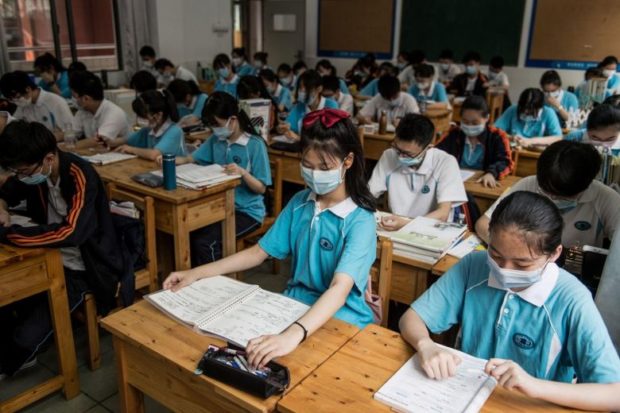 Since 2009, China has been the biggest source of international students for US schools. AFP via The Straits Times/Asia News Network

BEIJING — Madam Xu Weiqing had always hoped that her 13-year-old daughter would eventually study at a top US university. But she said that the country’s unfriendly policies, out-of-control Covid-19 pandemic and social unrest have given her second thoughts.

To boost their daughter’s chances of attending a university in the United States, home to more of the world’s top universities than any other country, Madam Xu and her husband had planned to send her to an international high school in the Chinese capital or possibly to a US high school. Their daughter has just completed seventh grade at a Beijing middle school.

“However, from a policy and security perspective, the US is no longer the top choice, and we’re considering sending our daughter to other countries, such as Canada, the United Kingdom or Australia,” Madam Xu said.

China is the largest source of international students in the world, with 662,100 leaving the country to study overseas in 2018. Almost half chose to study in the US.

Since 2009, China has been the biggest source of international students for US schools. According to the US-based Institute of International Education, one in three of the more than 1 million overseas students in the US came from China in the 2018-19 academic year.

However, implementation of a string of US government policies seen as unfriendly and its blaming of China for the pandemic, as well as protests over racial issues, have made many Chinese students reconsider plans to study in the US.

The UK has beaten out the US for the first time to become the preferred overseas study destination for Chinese students, according to a new report by New Oriental Education and Technology Group, an overseas study agency based in Beijing.

Mr Xiao Yejiong transferred to a US high school two years ago, when he was a sophomore, to increase his chances of getting into a top US university. The senior high school student returned to his hometown in Dongguan, Guangdong province, in mid-March, just as the pandemic became more serious in the US.

“Coming home was not an easy choice, since it affects my university application, as I have not taken the SAT, but my family and I still believe that safety is the most important thing,” the 18-year-old said.

Although he is still worried about returning to the US for undergraduate studies, he said it is too late to come up with a plan B, as he has spent the past three years preparing for the US college enrollment system.

“I’m afraid my only choice is to continue to study in the US, as I would fail miserably if I participated in the national college entrance exam in China. Going to study in other countries also requires lots of preparation,” Mr Xiao said.

However, he said, recent hostile policies and rhetoric by some US politicians who oppose China appear to be deterring many younger Chinese students from choosing the country.

Mr Ni Shiya, who has spent the past four years in the US, returned to China in July after Georgia State University (GSU) cut funding for his doctoral program due to the pandemic.

He obtained a master’s degree in sports management at Rutgers University, but just over a month into his four-year doctoral program at GSU, the university decided to cut the funding, which included a monthly subsidy and US$40,000 (S$54,794) a year for tuition, he said.

Mr Ni said he was also worried about his safety in the country, as there was no sign that the pandemic would be brought under control anytime soon. Hostile policies of the US government toward Chinese students also prompted his return, he added.

Many Chinese students were horrified and emotionally exhausted by a succession of US measures announced since last year, he said. They included limiting job opportunities for international graduates from US universities, prohibiting Chinese students from receiving visas to study in STEM (science, technology, engineering and mathematics) fields, and the recent policy flip-flop on whether foreign students whose universities were only teaching online would be granted visas.

“We’re tired of the uncertainties, of not knowing whether the policies will get stricter, whether our visas will be invalidated, or whether we will be targeted and blamed for the pandemic, so coming home is a tough but natural choice,” Mr Ni said.

To prevent a steep decline of Chinese student enrollment, some US universities have resorted to special arrangements to allow them to pursue their programs without leaving China.

Under the New York University Global Network’s “Go Local” plan, NYU Shanghai will host students who are currently in China and are unable or prefer not to travel to their US campuses this fall.

The Shanghai campus will welcome some 2,300 Chinese undergraduates and 800 graduate students from NYU and NYU Abu Dhabi for the fall semester, the university said.

Duke University also plans to allow around 125 students to spend the fall semester at Duke Kunshan University, the college it runs with Wuhan University in Kunshan, Jiangsu province.

Cornell University unveiled a “study away” program last month that will allow Chinese students to spend the fall semester at one of several elite domestic colleges, including Peking and Tsinghua universities in Beijing.

Mr Hu Min, president of New Channel International Education Group, an overseas study consultancy based in Beijing, said although the pandemic has dampened the enthusiasm of some parents and students for overseas study, it was not a major hurdle for those who were committed to studying abroad in the long term, as they would come up with ways to deal with the inconvenience it has brought.

“It has not changed the fact that many parents still want their children to receive a quality education, gain international experience and become more independent, disciplined and confident by studying abroad by themselves,” he said.

While the US has tightened visa policies for some Chinese students, the UK has reopened its post-study work visa to attract more international students, Mr Hu said.

Mr Tom Dretler, chairman of education consultancy US News Global Education, said he thinks the atmosphere of interaction and the overall cooperation framework between the US and China in terms of education remain healthy, despite current bilateral frictions.

The broad context of the policies issued by the Trump administration this year was that the US is going to have an election in around 90 days. The president is trying to determine a strategy, or any strategy, to reverse his standing in the polls, and one of his strategies is to make comments about China-US relations, Mr Dretler said.

Many US universities now offer spring and summer admission in addition to the conventional fall admission. They are also rolling out flexible measures for students, with 61 per cent scheduled to offer online teaching, and 16 per cent planning to adopt hybrid teaching that allows students to finish the remaining parts of their programs after the pandemic is no longer a significant threat, he added.

Dr Yu Lizhong, chancellor of NYU Shanghai, said the pandemic and tensions in the China-US relationship have not seriously dampened students’ long-term enthusiasm to pursue overseas study and foreign universities are still eager to enroll Chinese students as they usually pay full tuition.

If bilateral tensions persist in the long-term, more Chinese students will choose destinations that are more welcoming, he said.

Read Next
East Avenue Medical Center to be converted into COVID-19 only hospital — Galvez
EDITORS' PICK
House to probe Facebook takedown of gov’t accounts
Smart poised to turn PH into ‘Smart 5G country’ with nationwide rollout
Water remains our saving grace right now
Feud is over: Velasco next Speaker on Oct. 14
Get 80% OFF Ignite 2020 Cyber Tickets starting 28 September
Duterte meets with Cayetano, Velasco amid speakership issue
MOST READ
Velasco to take over as Speaker on Oct. 14
Gun attack in PMA: Air Force man killed, 2 others wounded
‘I offered to resign’ because of endless corruption, says Duterte
AMLC investigator says De Lima not involved in Bilibid drug trade
Don't miss out on the latest news and information.