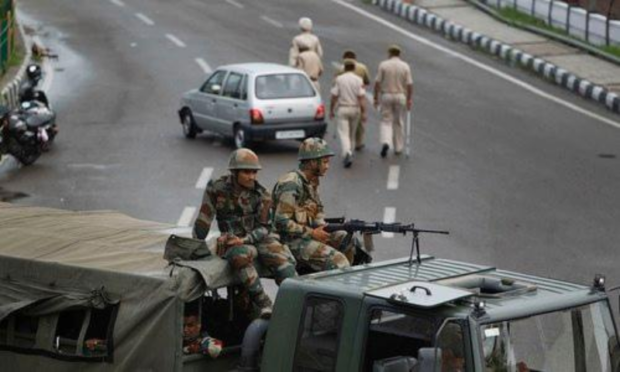 Schofield said that while there have been more protests internationally over the situation in Kashmir recently than in the past few decades, a rule of “might is right” was prevalent in the valley. AP via Dawn/Asia News Network

ISLAMABAD — British historian, biographer and author of several books on South Asia and Kashmir, Victoria Schofield, on Wednesday said that the Indian government has “failed to win the hearts and minds of Kashmiris during the last year”.

Speaking during a webinar, titled Kashmir: 365 Days of Silence, she said that a “massive misinformation campaign” was being propagated by the Indian government about what had been happening in occupied Jammu and Kashmir since August 5, 2019 when India abrogated Article 370 and 35(a) of its constitution stripping the valley of its special status.

“[India] has alienated more people than might have been had it taken a softer approach,” she said.

Schofield said that while there have been more protests internationally over the situation in Kashmir recently than in the past few decades, a rule of “might is right” was prevalent in the valley and the Indian government was “pursuing its own policy regardless of what the international community was saying or indeed what the Kashmiris were saying”.

She added that India had also “failed at the attempt over the last one year to create indigenous leadership to cooperate with the Indian government because anyone who comes out as pro-Indian is discredited among the larger Kashmiri population”.

“There is no real leadership,” she said.

Professor Swain said that it was important to understand why Indian Prime Minister Narendra Modi had taken the step to annex Jammu and Kashmir. “Modi’s popularity comes from having a fragile, volatile situation in [occupied] Kashmir. He took the decisions knowing very well what the repercussions would be,” he said.

He termed the move “very good for Modi’s politics but bad for Kashmir and bad for India”.

“India had a certain kind of judiciary and secular system and a major portion of it has been lost to this one decision,” he explained.

Swain expressed the view that what was happening in occupied Kashmir was “horrible” but that the situation was “absolutely under Bharatiya Janata Party’s (BJP’s) control”.

“There is no semblance of peace and stability in the valley. The BJP is running it with a massive misinformation campaign. Modi is giving the impression of a strong Hindu leader. To him, Kashmiris are Muslims first and when he can take such measures against them, it is good [for showing him as] a strong Hindu nationalist leader.”

The professor said that there was a wave of rising Hindu nationalism across India which had silenced the more secular forces in the country, especially when it came to Kashmir.

“The Hindu nationalist forces have become so overwhelmingly powerful in the country that the secular parties have silenced themselves. There are some forces that are opposing BJP but they are still struggling to find ways to confront Modi’s agenda.”

Talking about the reaction of the international community, Swain said that there was “no doubt that the United Nations in particular” was concerned. He added that the international media have written quite extensively about what is going on in [occupied] Kashmir. “There is no lack of information [but] the momentum has not reached a critical mass yet.”

He also said that there was a “vacuum in international leadership that would take a stand for Kashmir”.

Responding to a question about the changes in domicile law, Schofield said the move would not create stability in Kashmir but would instead lead to “areas with barbed wires and high fences because the people would be unhappy”.

“This can become a matter of friction. They are having the whole demography changed for a political motive which is tragic,” she said.

Speaking about possible solutions for resolving the Kashmir issue, Schofield said that “it is a moral duty of the international community to speak about this because it makes India uncomfortable.” She added that she had “a lot of hope in Indian civil society because they know [the Kashmir move] does not align with the country’s secular values”.

Swain pointed out that there was a growing resentment in Kashmir. “It is a very explosive situation but at the same time we should not underestimate India’s position”. He said that he believed India could win back the people or the move could be reversed but only after Modi’s term had ended.

“If any retreat happens, it will only be after a new regime in four years. Right now the situation will remain quite tense.”

He added that among the practical steps that Pakistan could take was “providing moral support to the Kashmiris”. He highlighted that the Organization of Islamic Conference (OIC) could play an important role in putting pressure on India.

“Islamic countries/OIC countries are usually divided when it comes to Kashmir. They can really come together on [Kashmir issue],” he said.

Schofield added that Pakistan should take the human rights abuses in occupied Kashmir to international forums and lobby other countries for support. “Dialogue has to be one of the most important ways to try and resolve this dispute. Failure of dialogue has led us to this situation,” she concluded.