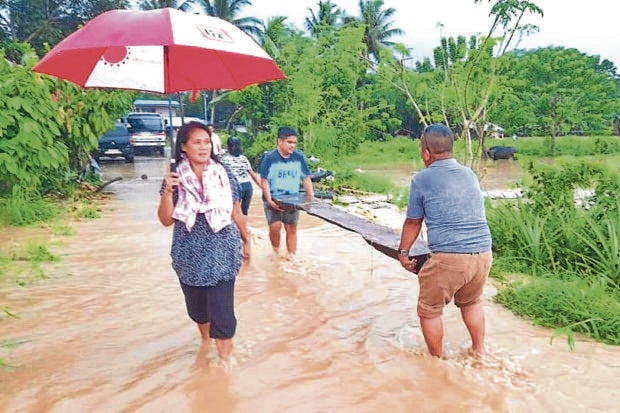 NO ORDINARY DAY Residents of Barangay Sicade in Kumalarang, Zamboanga del Sur, go on with their daily activities even as
floodwaters submerge village roads and rice farms. —MARK SALVA/CONTRIBUTOR

In Zamboanga del Sur, a 27-year-old man guiding motorcycle drivers cross an overflowing spillway in Dumingag town on Tuesday died after he was swept away by a strong current.

In Davao City, more than 700 residents at Talomo Proper fled their homes and spent Tuesday night in church buildings and at a village gym, after hours of heavy rains brought floods that reached their homes.

The city disaster risk reduction and management office reported that 600 people sought refuge in Our Lady of Lourdes parish church and 100 others in Talomo Proper barangay hall at 11 p.m. at the height of the flooding.

In Cotabato province, low-lying areas in the towns of Midsayap, Alamada, Libungan, Aleosan and Pigcawayan were submerged in knee-deep floodwaters, affecting 10,000 residents after an hourlong downpour on Tuesday.

Alamada Mayor Jesus Sacdalan said close to 3,000 residents were affected by floods.“Roads that we have repaired after the previous months’ landslides and flash floods were damaged again,” Sacdalan said.

Cotabato Gov. Nancy Catamco ordered the provincial disaster risk reduction and management council to prepare a report so the provincial government could determine the amount of assistance it would provide to affected communities.

In Zamboanga del Sur, at least six villages in Kumalarang town were hit by floods, affecting 500 families and submerging at least 30 hectares of rice lands.

Donald Ibona, municipal disaster risk reduction and management action officer, said crops in 30 percent of the affected rice farms had yet to harvested when floodwaters surged.

He said residents were asked to stay alert and were not forced to leave their homes, although the town government had prepared evacuation sites.