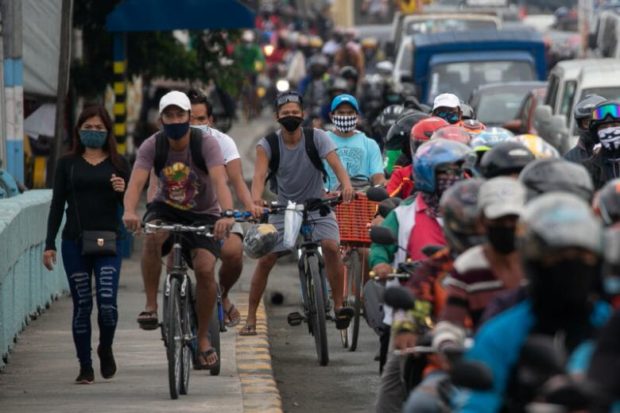 Traffic jam in Metro Manila on Aug 4, 2020. Checkpoints have been set up all over the area, home to some 12 million. REUTERS via The Straits Times/Asia News Network

MANILA, Philippines — The Philippines could soon become the new epicenter for the coronavirus pandemic in Southeast Asia, as it reported another record single-day jump in infections on Tuesday (Aug 4).

The grim news came on the first day of a tough new lockdown that will confine some 27 million to their homes for two weeks and sent the economy in a tailspin again.

The Department of Health tallied 6,352 new cases, bringing the country’s total caseload to 112,593. By comparison, Indonesia, which has the most number of cases in Southeast Asia, has 115,056 infections.

Eleven more people in the Philippines died, raising the death toll from the pandemic to 2,115.

The government on Tuesday restored tough shelter-at-home restrictions in Metro Manila and four densely populated provinces – Bulacan, Rizal, Laguna and Cavite. Health workers had warned that the country was “waging a losing battle” against the coronavirus as cases spike after restrictions were relaxed in June.

Overnight, checkpoints manned by policemen, soldiers and village watchmen were set up all over Metro Manila, home to some 12 million. These created choke points along major highways leading to the capital.

“We had to pass through several checkpoints, and there was traffic at every checkpoint,” said Mr Jeremy Encarnado, 40, who runs a food delivery business.

He said sentries were checking not only for travel passes but also proof that those passing through had tested negative for Covid-19.

Long queues were also seen at groceries, public markets and banks, as people stocked up on food and cash.

Agriculture Secretary William Dar said on Tuesday that there was no need for panic buying, as he assured residents that Metro Manila would not run out of rice, vegetables, fruits and meat any time soon.

In Quezon City, Metro Manila’s largest city, the head of a task force meant to promote discipline caused a stir when he issued “shoot-to-kill” orders on lockdown violators.

He was promptly told to refrain from issuing “improper and illegal” statements.

Under the new restrictions, only authorized people, including medical personnel and workers in vital companies, are allowed to venture out of their homes.

Authorized companies, including banks and food processing firms, can operate partly but need to shuttle their employees between home and work.

Workers can travel by bike, motorcycle and private car, but mass transit is closed.

President Rodrigo Duterte’s spokesman Harry Roque said the government was not keen on extending the lockdown beyond two weeks. “I have to be honest. Our economy cannot withstand a long lockdown,” he told reporters on Tuesday.

The economy stands to lose P12 billion a day during the lockdown, economist and Marikina Representative Stella Quimbo estimated.

Analysts forecast that the Philippine economy, once Asia’s fastest-growing, probably contracted by at least 8 per cent, mainly because of the sweeping lockdown from mid-March to June 1, among the longest in the world.

The government will report gross domestic product figures for the second quarter on Thursday (Aug 6).