WASHINGTON — President Donald Trump has launched a battle against mail-in voting in the 2020 elections, which health experts say is crucial to limiting the spread of coronavirus, but which he fears would favor Democratic rival Joe Biden. 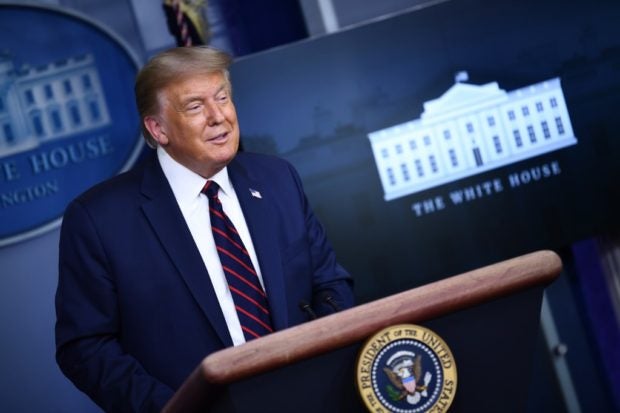 US President Donald Trump speaks to the press in the Brady Briefing Room of the White House in Washington, DC, on August 4, 2020. Photo by Brendan Smialowski / AFP

Facing an uphill fight for reelection, Trump on Monday said he would sue Nevada to block the state from allowing all its voters to cast ballots on November 3 via the US Postal Service.

In a tweet he suggested another motive. Nevada using vote-by-mail makes it “impossible for Republicans to win the state,” Trump said.

“Using Covid to steal the state. See you in court!”

The 50 states each manage their own voting processes, and they have long permitted absent residents to vote by mail. Five already allow all their voters to mail it in.

The need is clear. COVID-19 remains out of control in much of the country, with more than 45,000 new cases reported every day.

Long lines at voting stations during primaries earlier this year showed the risk to voters and poll workers, who are often older retirees.

But instituting by-mail voting nationwide in a short period is a massive technological and logistical challenge.

Nathaniel Persily, a Stanford University Law School elections expert, estimates that 50-70 million votes could be cast in November via USPS, and another 50 million in person.

That means in a short time localities have to get more materials and machinery prepared, and get the information and ballots to voters.

The problems were manifest in recent primaries. One congressional fight in New York is still unresolved after six weeks in part because of the Postal Service’s poor handling of ballots.

In Wisconsin in April, tens of thousands of people never received their mail ballots; thousands more weren’t counted because they were delivered late; and 23,000 were disqualified for small technical errors related to completing the form.

“This is the largest transformation of the infrastructure of American elections in the nation’s history, and we are doing it in a four-month period,” Persily said.

“It poses incredible challenges for the jurisdictions,” he told AFP.

“Right now many of them are not ready.”

Trump and his Republican Party appear determined to fight it.

Persily says more than 130 lawsuits have been filed across the country over mail-in voting.

Generally, Republicans are trying to limit the practice, arguing it raises security and fraud risks, while Democrats want fewer restrictions to make sure no one is disenfranchised.

Trump — who himself has voted by mail — has made clear he believes that the Democrats will reap more votes if the practice is universal.

Mail-in voting “doesn’t work out well for Republicans,” he said in April.

Trump has repeatedly warned that mail-in voting will lead to massive voting fraud, a claim not supported by any evidence from states already offering voting by mail.

The challenge includes the US Postal Service.

Weakened by tight budgets, falling income, and coronavirus in its ranks, the USPS is a weak link in getting ballots to voters and back to authorities for the count on time.

That raises the prospect of long legal fights, such as the one in New York now, over whether mailed-in ballots should be counted or disqualified.

It also could mean a long wait for White House and congressional election results on November 3.

There are also worries that Trump, who says he does not believe the USPS can do the job, could hamstring its election service.

Louis DeJoy, the leading Republican fund raiser Trump named earlier this year to run USPS, has raised the possibility of staff cutbacks and closing a number of post offices.

“We can’t let Trump turn the USPS into a political pawn run by a partisan cheerleader” — especially as we’re staring down an election in which millions could vote by mail,” she tweeted.

Some analysts suspect Trump has another purpose in attacking vote by mail — to make his supporters distrust the election process itself.

“He might be trying to cast doubt on the legitimacy of the election and challenge mail-in votes if he can gain a political advantage,”said Rick Hasen, and election expert at University of California, Irvine.

He might be looking to make an excuse for an eventual loss,” Hasen added.