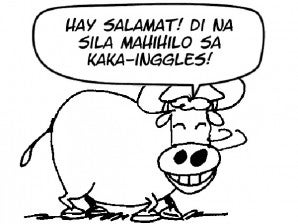 Incoming first-graders in June are expected to speak up more in class as the Department of Education (DepEd) switches to the mother tongue as medium of instruction in the early grades.

This means that first-graders in Manila and nearby provinces will be taught in Tagalog, those in Ilocos in Ilocano, those in Cebu Cebuano and those in parts of Leyte and Samar in Waray.

Thus, a “dog” to a Tagalog student will always be “aso,” it will be “ayam” to a Bicolano first-grader, and “iro” to a Cebuano pupil.

“The students will be very participative, the class will be very interactive, it will be a very noisy classroom,” said Rose Villaneza, a DepEd official at the lead of developing new first-grade learning materials in different Philippine languages.

“They can’t wait [to answer] and you’ll really see that students really don’t have inhibitions anymore. They are no longer afraid to speak up,” she told the Inquirer, citing her observations from select classes where mother tongue instruction was pilot-tested.

The full shift to the mother tongue is part of the phased implementation of the K-12 (Kindergarten to 12 years) program, which aims to develop highly qualified Filipino high school graduates by decongesting a crammed curriculum and giving them more time to learn through an additional two years.

Studies have shown that teaching with the use of the mother tongue is an effective technique in developing language and critical thinking skills among early learners.

It is known to increase students’ scores across subjects and also reduce the incidence of early dropouts.

Under the DepEd program, the mother tongue is envisioned to serve as a foundation in multilingual education, where students learn to use their home language from Grades 1 to 3, then graduate to learning Filipino and then English.

Officials say the program is aimed at strengthening—not diminishing—the students’ grasp of secondary languages, including Filipino and English.

Lingua franca or first language programs were tested by the DepEd before but none were institutionalized.

“Before this program, a child’s mother tongue had been like a pair of slippers that he should take off once he enters the classroom. Take off your Bicolano because here, you will learn in English,” said Felicitas Pado, a reading and early learning expert from the University of the Philippines (UP).

“Remember those schools that told students to speak only in English? That’s a classroom management technique. Because when you say ‘English only,’ the classroom gets quiet,” she said.

The DepEd is currently developing new learning materials initially for the first grade as it gears up for the introduction of a new curriculum for school year 2012-2013.

Almost 30 teachers and staff from UP Diliman and DepEd worked on the learning materials—lesson plans, illustrated reading materials, among others—for two weeks this month at the UP College of Education.

Pado and Villaneza, both at the lead of the effort, said local flavor is infused in the learning materials to help students better relate to what they are learning. For instance, local anecdotes are used for stories while traditional garments in the respective localities are used in illustrations.