TOKYO — As Japan marks 75 years since the devastating attacks on Hiroshima and Nagasaki, the last generation of nuclear bomb survivors are working to ensure their message lives on after them. 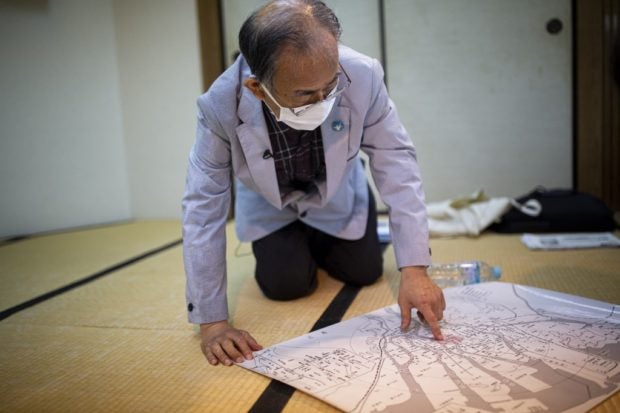 In this picture taken on July 25, 2020, 74-year-old Jiro Hamasumi, whose mother was pregnant with him in Hiroshima when the atomic bomb struck in 1945, points at the hypocentre of the bombing and the Hiroshima Peace Memorial (Genbaku Dome) on a map during an interview with AFP in Tokyo. Photo by Behrouz MEHRI / AFP

The “hibakusha” — literally “person affected by the bomb” — have for decades been a powerful voice calling for the abolition of nuclear weapons.

There are an estimated 136,700 left, many of whom were infants or unborn children at the time of the attacks.

The average age of a survivor now is a little over 83, according to Japan’s health ministry, lending an urgency as they share their testimonies and call for a ban on nuclear weapons.

“What we hibakusha are saying is we can’t repeat (a nuclear attack),” 88-year-old Terumi Tanaka, who survived the Nagasaki bombing, told AFP ahead of the anniversaries.

“To this end, we have to let people know what we experienced, for them to hear the facts.”

Tanaka was 13 when the bomb hit his hometown. The attack on Nagasaki killed 74,000 people and came three days after a first bomb devastated the city of Hiroshima, killing 140,000.

He has spent much of his life sharing his experience, hoping that explaining the horrors of nuclear weapons will convince people to support a ban.

But he recognizes that the community of those who lived through the attacks is shrinking, and their message will have to be passed on by others in the decades to come.

“We will all pass away, eventually,” he said.

“We set up a group called No More Hibakusha Project, which works on preserving records as archives, including what we’ve written… so that (the next generation) can use them in their campaigns.”

Tanaka worries at times that interest is fading, acknowledging that speeches by hibakusha often attract no more than a handful of people.

At 74, Jiro Hamasumi is among the youngest survivors of the attacks. His mother was pregnant with him in Hiroshima when the bomb struck.

It killed his father, most likely instantaneously, and claimed several other relatives in the aftermath.

“Not a day goes by when I don’t think about my father,” he told AFP.

His knowledge of the attack comes from the accounts of his siblings, who described the dizzying flash and ear-splitting roar that formed the first indication the bomb known as Little Boy had detonated.

His father was at work when the bomb hit, just a few hundred meters from the epicenter. Hamasumi’s mother and siblings tried to reach his office the day after but were forced back by the “heat and smell of burned flesh.”

When they finally reached his father’s office, they found only “something resembling his body”. All they could retrieve were a few metal items that survived the flames — a belt buckle, a key and part of his wallet.

Born in February 1946, Hamasumi escaped the physical effects experienced by many children exposed to radiation in the womb.

But the attack has defined his life, and he has spent decades campaigning against nuclear weapons.

“To me, the nuclear umbrella only means the mushroom cloud,” Hamasumi said.

“Hibakusha want the United States to apologize to us, but the proof of the apology is nuclear abolition, we’re not after vengeance.”

As the hibakusha age, they are passing the baton to young activists, many from Hiroshima and Nagasaki, who have grown up steeped in the memories of survivors.

Mitsuhiro Hayashida, 28, is the grandchild of a Nagasaki hibakusha and organises events for survivors to share their stories.

He also helps oversee an international online petition for a ban on nuclear weapons, which has garnered more than 11 million signatures.

But he too worries that the attacks are fading from collective memory.

“Today, the children and grandchildren of survivors, like me, are campaigning, but the weight of our words is probably less than half of the testimonies of survivors,” he told AFP.

“We really need the world to move towards nuclear abolition while atomic bomb survivors are alive.”

That desire is what animates Keiko Ogura, who turns 83 this week and was just eight when the bomb struck Hiroshima.

“We are ageing and don’t know when our time will come,” she told journalists last month.

“We old hibakusha want to see nuclear abolition as soon as possible, because we want to report it to those who died when we see them (in the afterlife).”