JERUSALEM —  Israel launched air strikes on Syrian military targets in southern Syria late Monday, after thwarting an attack near the Israeli-occupied sector of the Golan Heights. 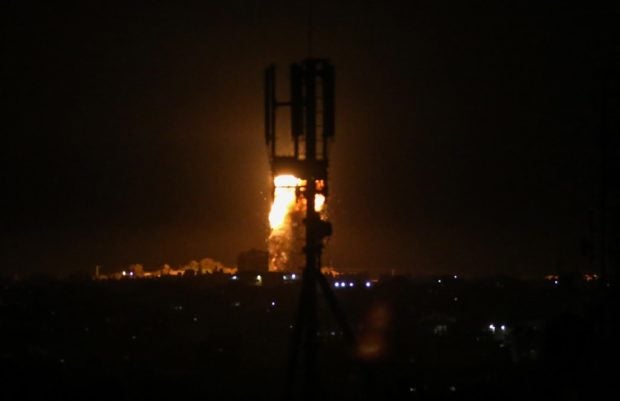 A ball of fire is seen following an Israeli airstrike on Rafah in the southern Gaza Strip early on August 3, 2020. Israeli fighter jets carried out strikes on Hamas facilities in Gaza after a “rocket” was fired from the Hamas-controlled enclave towards the Jewish state, its military said. It was the first to be fired from the Palestinian coastal enclave since the first week of July, and set off sirens, the Israeli army said. Photo by SAID KHATIB / AFP

In Damascus, the state-run news agency Sana said Israeli helicopters rocketed Syrian army positions near Quneitra in the south but caused only material damage. It also said air defenses had gone into action near the Syrian capital.

The Israeli army said its fighters jets, attack helicopters and other warplanes struck Syrian army positions in retaliation for the attempt to lay explosives in the Golan Heights.

“The IDF holds the Syrian government responsible for all activities on Syrian soil, and will continue operating with determination against any violation of Israeli sovereignty,” it said.

Tensions are already high between bitter rivals Israel and Syria.

Israel did not directly blame Syrian forces for the munitions fire, but said it held the Damascus government responsible.

And earlier Monday, the Israeli army said it had killed four men laying explosives near the Israeli-occupied sector of the Golan Heights.

“They were inside Israeli territory but beyond the fence,” military spokesman Lieutenant Colonel Jonathan Conricus told journalists in a telephone briefing.

“Our estimate is that all four were killed,” Conricus said in English, adding that there were no Israeli casualties.

Prime Minister Benjamin Netanyahu said in a statement Monday that “the army thwarted an attempted attack on the Syrian front.”

“We don’t let our guard down,” he said, recalling an incident at the Lebanese border last week that prompted Israeli artillery fire across the frontier, as well as rocket fire Sunday evening from the Hamas-controlled Gaza Strip which led to retaliatory Israeli air strikes.

Israel will “strike anyone who attacks us or tries to attack us,” he added.

Several Israeli media outlets reported that Monday’s actions were in response to an increased threat from the Iran-backed Lebanese Shiite group Hezbollah, which has a significant presence in Syria.

Last month, five Iran-backed fighters were killed in an Israeli missile strike south of Damascus, according to Britain-based monitoring group the Syrian Observatory for Human Rights.

Then last Monday, Israel said it had thwarted an infiltration attempt from Lebanon by up to five Hezbollah gunmen, a claim denied by the Iran-backed group.

Israel reported an exchange of fire that forced the “terrorists” back into Lebanon. It said it fired artillery across the heavily guarded border for “defensive” purposes.

“We do not know at this stage and we cannot confirm a link between this terrorist squad and Hezbollah or Iranians,” Conricus said.

“We know that there are many different factions operating on Syrian soil.”

The Syrian Observatory said it was likely, but could not be confirmed, that the attackers were from the Syrian Resistance to Liberate the Golan.

The Hezbollah-linked group was formed more than six years ago to launch attacks in the Israeli-occupied zone.

The Syrian Observatory said late Monday there were Israeli air raids on the southern province of Quneitra and on Boukamal city, near the Iraqi border in the northeast.

Conricus said that Israel’s Maglan commando unit had been deployed at the attack site for several days.

“We spotted irregular night-time activity in this specific location for the past week and we had a commando unit deployed in the area,” he said.

Since 2011, Israel has launched hundreds of strikes in Syria, targeting government troops and allied Iranian and Hezbollah forces and vowing to end Iran’s military presence in Syria.