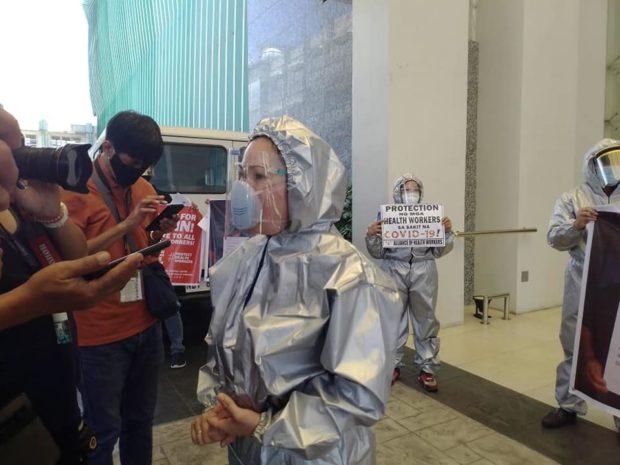 MANILA, Philippines — A group of health workers has slammed the government as well as the Jose Reyes Memorial Medical Center (JRRMMC) for allegedly neglecting a hospital worker who died due to the latest coronavirus strain.

Members of the Alliance of Health Workers (AHW) chapter in JRRMMC staged a protest on Monday, saying that the death of health worker Judyn Bonn Suerte is caused by the hospital and the government’s inefficiency, as their calls for mandatory testing for health workers and the continuous provision of personal protective equipment (PPEs) fell on deaf ears.

Nurse Cristy Donguines, president of the AHW union at the JRMMMC said that Suerte might have survived the virus if he was treated at the hospital where he was working for and not in another hospital.

“On July 31, our comrade died of the deadly virus. He is one of the most active health worker-leader of Jose Reyes Memorial Medical Center Employees Union-Alliance of Health Workers (JRRMMCEU-AHW),” Donguines said in a statement posted on AHW’s Facebook account.

“We believe that Bonn’s life would have been saved if it had been immediately treated by Jose Reyes Memorial Medical Center and not brought to Dr. Jose n. Rodriguez Memorial Hospital where he died. It is painful to think but it is clear to us that this is a major negligence of the hospital management and the DOH itself due to their anti-health workers’ protocols,” she added.

According to Donguines, Suerte was transferred to a COVID-19 referral hospital based on the Department of Health (DOH) protocol that employees with severe COVID-19 cases should be transferred to an exclusive COVID-19 hospital. 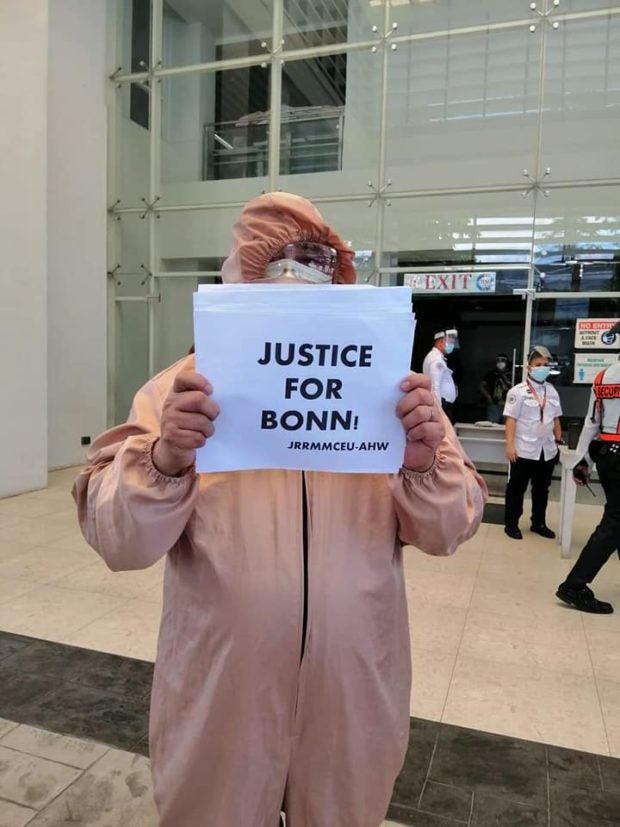 Worse, she noted that surviving health workers would have to currently pay for their swabbing tests before they are allowed to return to work.

“One of our problems is that; no free re-swabbing test after our quarantine. It should be one of the protocols to be implemented by the hospital to ensure that we are really fit to work,” Donguines said.

AHW’s protest and call came days after various groups from the healthcare industry called for a timeout as hospitals appear overwhelmed with the surge in COVID-19 cases, and after President Rodrigo Duterte reverted Metro Manila and some nearby provinces under a modified enhanced community quarantine (MECQ).

Health workers aired several sentiments about their plight while requesting government to reassess and recalibrate its COVID-19 response.

Duterte heeded the calls of the health workers, but he also criticized them for demeaning the government as they took their grievances publicly when he said they could have just sent a letter to him. He also accused them of threatening to start a revolution — a claim refuted by the Healthcare Professions Alliance against COVID-19 earlier.

READ: ‘We are not calling for a revolution,’ says healthcare alliance spox

Further, Duterte also told nurses and other health workers who are complaining about low salaries to instead join the police force if they want to get higher pay.

Presidential spokesperson Harry Roque defended the Chief Executive for criticizing the health workers, saying that the groups sought publicity first before telling the government about its concerns.