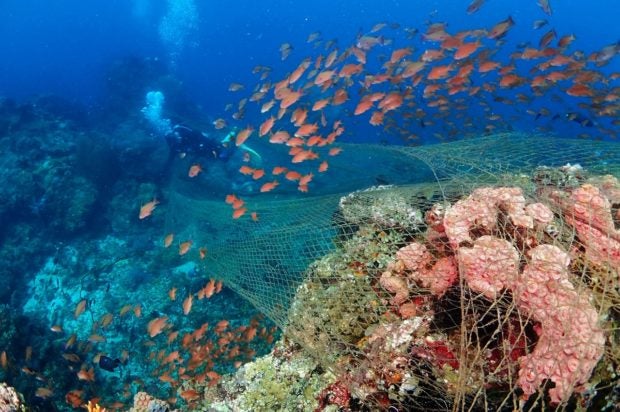 REEF CHOKER A diver removes abandoned fishing nets off the reefs in diving sites in Batangas province. These “ghost nets” have long been a major sea pollution concern as they trap and kill fish, corals and other marine life that get caught in them. —MARIVIC MARAMOT/Contributor

Divers in Batangas province have removed fishing nets choking coral reefs around Sombrero Island and other diving sites between the towns of Tingloy and Mabini, areas within Verde Island Passage, the world’s “center of the center” of marine shorefish biodiversity.

The fishing nets, also called “ghost nets,” were abandoned by commercial fishing boats after being caught in rocks or corals, usually by accident. These turn almost invisible to divers and form ghoulish silhouettes underwater as they trap fish inside and eventually strangle the reefs.

Ghost nets are major contributors to the global plastic sea pollution since the fishing gear, usually made of synthetic material, takes up to 600 years to break down or decompose, according to the United Nations Environment Programme.

“The only way to free the corals from ghost nets is to … manually untangle and cut them loose, then carefully gather and bring them to surface,” said diver Penn delos Santos.

The recently recovered nets, when spread out, could cover as much as 100 square meters.While the use of huge nets is common in open-water fishing, Delos Santos, 52, said those his group found in shallow portions of the sea could have come from boats “unfamiliar” with the depth around Sombrero.

He said the nets still looked new and “clean” when divers encountered them on July 16 at about 18 meters deep. This indicated that the fish nets were abandoned just recently or during the lockdown when diving activities were restricted.

“The pandemic has [allowed] illegal fishing to flourish [since] authorities became busy working to fight the [coronavirus]. Fishermen were free to [enter shallow fishing grounds and even dive sites] and fish anywhere,” Delos Santos said.

Divers with scissors and knives returned to the Beatrice Rock and Batok dive sites on July 22 and July 30 to cut loose and haul the ghost nets.