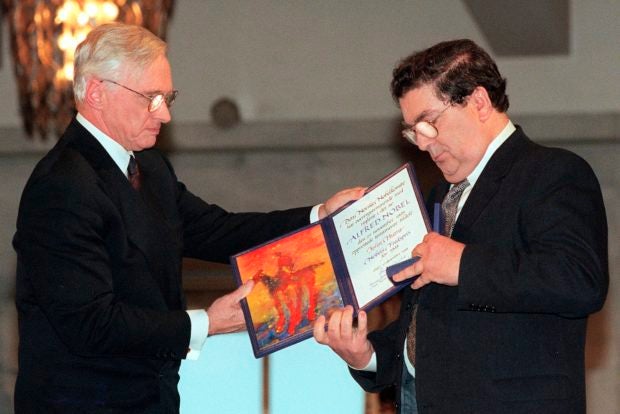 In this Dec. 10, 1998 file photo, John Hume, right, looks at the Nobel Peace Prize diploma which he received from Francis Sejersted, left, chairman of the Norwegian Nobel Peace Prize Committee during the award ceremony in Oslo Town Hall. The family of politician John Hume, who won the Nobel Peace Prize for work to end violence in Northern Ireland, says he has died. He was 83. The Catholic leader of the moderate Social Democratic and Labor Party, Hume was regarded by many as the principal architect behind the peace agreement. (AP Photo/Bjoern Sigurdsoen/NTB/POOL)

LONDON — Politician John Hume, who won Nobel Peace Prize for work to end violence in his native Northern Ireland, has died, his family said Monday. He was 83 and has suffered from ill health for a number of years.

The Catholic leader of the moderate Social Democratic and Labour Party, Hume was seen as the principal architect of Northern Ireland’s 1998 peace agreement. He shared the prize with the Protestant leader of the Ulster Unionist Party, David Trimble, for their efforts to end the sectarian violence that plagued the region for three decades and left more than 3,500 people dead.

“I want to see Ireland as an example to men and women everywhere of what can be achieved by living for ideals, rather than fighting for them, and by viewing each and every person as worthy of respect and honor,” he said in 1998. “I want to see an Ireland of partnership where we wage war on want and poverty, where we reach out to the marginalized and dispossessed, where we build together a future that can be as great as our dreams allow.”

Born January 18, 1937, in Northern Ireland’s second city — Londonderry to British Unionists, Derry to Irish nationalists — Hume trained for the priesthood before becoming a fixture on the political landscape. An advocate of nonviolence, he fought for equal rights in what was then a Protestant-ruled state, but he condemned the Irish Republican Army because of his certainty that no injustice was worth a human life. 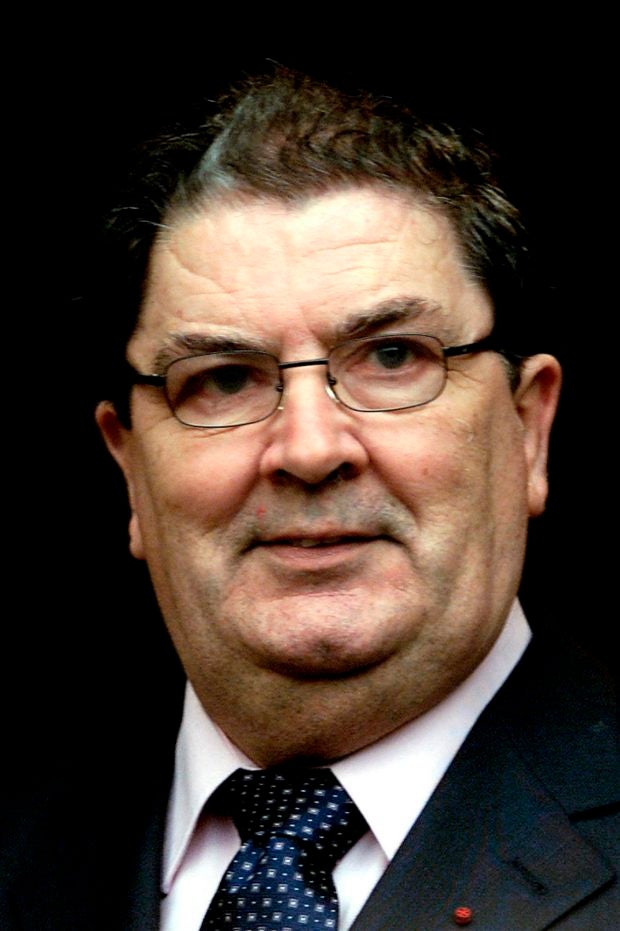 In this Jan. 21, 2002 file picture, Nobel Peace Prize Winner and former leader of the Social Democratic Labour Party John Hume is shown at the Guild Hall, Londonderry, Northern Ireland. The family of politician John Hume, who won the Nobel Peace Prize for work to end violence in Northern Ireland, says he has died. He was 83. The Catholic leader of the moderate Social Democratic and Labor Party, Hume was regarded by many as the principal architect behind the peace agreement. (AP Photo/Peter Morrison)

He championed the notion of extending self-government to Northern Ireland with power divided among the groups forming it.

“Ireland is not a romantic dream; it is not a flag; it is 4.5 million people divided into two powerful traditions,” he said. “The solution will be found not on the basis of victory for either, but on the basis of agreement and a partnership between both. The real division of Ireland is not a line drawn on the map, but in the minds and hearts of its people.”

While both Hume and Trimble credited the people of Northern Ireland and the Irish Republic for approving a referendum that led to power-sharing, it was Hume’s diplomacy that offered the impetus to the peace process that led to the 1998 Good Friday accord.

Hume won the breakthrough in Belfast’s political landscape in 1993 by courting Gerry Adams, the head of Sinn Fein, the political wing of the Irish Republican Army, in hopes of securing an IRA cease-fire. That dialogue burnished Adams’ international credibility and led to two IRA cease-fires in 1994 and 1997.

Like most Protestant politicians at the time, Trimble had opposed efforts to share power with Catholics as likely to jeopardize Northern Ireland’s union with Britain. He at first refused to speak directly with Adams, insisting that IRA commanders needed to prove they were willing to abandon violence.

He ultimately relented and became pivotal in peacemaking efforts.

Hume had envisioned a broad agenda for the discussions, arguing they must be driven by close cooperation between the British and Irish governments. The process was overseen by neutral figures like U.S. mediator George Mitchell, with the decisions overwhelmingly ratified by public referendums in both parts of Ireland.

“It is impossible to properly express the scale and significance of John Hume’s life,” Martin said in a tweet. “He was one of the towering figures of Irish public life of the last century. His vision and tenacity saved this country. We owe him and his wife Pat so much.”