Lebanese foreign minister quits over lack of will to reform 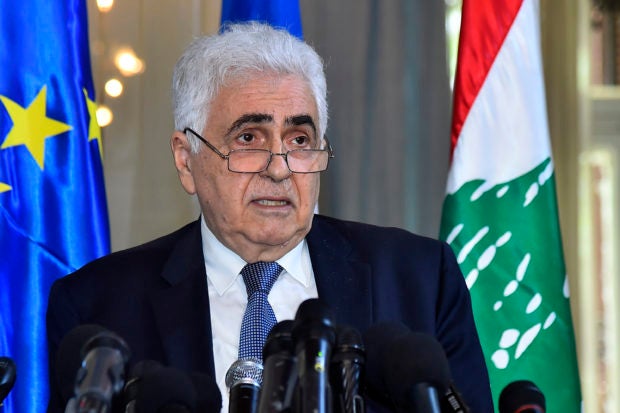 In this photo released by Lebanon’s government, Lebanese Foreign Minister Nassif Hitti, holds a news conference following the meeting with his French counterpart Jean-Yves Le Drian, at the Lebanese foreign ministry, in Beirut, Lebanon, Thursday, July 23, 2020. Hitti resigned on Monday, Aug. 3, 2020, becoming the first Cabinet minister to defect from his post amid the severe economic and financial crisis striking the country. (Dalati Nohra via AP)

BEIRUT — Lebanon’s foreign minister resigned on Monday amid the severe economic and financial crisis gripping the Arab country, warning that a lack of vision and a will to make changes risked turning the country into a “failed state.”

Nassif Hitti is the first Cabinet minister to defect from his post amid the crisis, which poses as the most significant threat to the country since a devastating 15-year civil war ended in 1990. His resignation is a blow to Prime Minister Hassan Diab’s government, which has struggled to implement reforms amid rapidly spiraling inflation and soaring unemployment and poverty, made worse by the coronavirus pandemic.

“After giving it a lot of honest thought, I have come to the conclusion that I cannot perform my duties in these historical circumstances,” Hitti said. He said he had decided to resign “due to the absence of a vision for Lebanon … and the absence of an effective will to achieve comprehensive structural reform.”

In a stark warning, he said Lebanon was turning into a “failed state” and urged politicians to rally around the country’s national interest.

“I took part in this government to work for one boss called Lebanon. I found in my country multiple bosses and conflicting interests,” he said. “If they do not come together in the interest of the Lebanese people, the ship will sink with everyone on board.”

A career diplomat, Hitti became foreign minister in January as part of Diab’s government after former Prime Minister Saad Hariri resigned under pressure from anti-government protests. Diab was supported by the Iran-backed Hezbollah group and its allies and lacked key support from his own Sunni Muslim constituency. According to Lebanon’s sectarian power-sharing system, the country’s prime minister must be a Sunni.

Diab’s inherited a country already teetering with the financial crisis and mass protests, and his government was immediately besieged by the coronavirus pandemic and ensuing lockdown which exacerbated the country’s many troubles. Talks with the International Monetary Fund for a bailout have stalled and its currency has collapsed.

Local media reports said Hitti also was angered by Diab’s criticism of French Foreign Minister Jean-Yves Le Drian following his visit to Beirut last month during which he said Lebanon will not be getting any financial assistance before initiating substantive reforms. Diab had said Le Drian “did not bring anything new” and was not properly informed about the reforms implemented by the Lebanese government.

Diab accepted Hitti’s resignation later Monday and was in consultations with the president over a potential replacement.

It was not immediately clear whether his resignation would be accepted and whether one of the other ministers would assume his responsibilities in a caretaker capacity until a new minister is appointed.