The importance of being Niel Tupas 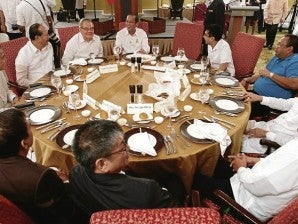 PRESIDENT Aquino talks with his political allies and some of the 188 congressmen who voted for the impeachment of Supreme Court Chief Justice Renato Corona in a caucus. Among them is Iloilo Rep. Niel Tupas Jr., one seat to the left of Mr. Aquino. EDWIN BACASMAS

ILOILO CITY—This may be the most important case both in his professional and political career.

But doubts have been raised about the capability of Iloilo Rep. Niel “Junjun” Tupas Jr. to lead the team of prosecutors in the impeachment trial against Supreme Court Chief Justice Renato Corona.

The doubts grew when the prosecution panel appeared unprepared to present its case during the second day of the impeachment trial.

Tupas acknowledged the combined legal experience of the defense team but was confident that the prosecutors, aided by at least 15 private lawyers, would successfully convict Corona.

“The impeachment is more than legal technicalities. It involves the search for the truth, making our democratic institutions work and our officials accountable,” he told the Inquirer.

Tupas can also lean on another Visayan, a member of the prosecution team who is not only a veteran lawyer and congressman but is also not a stranger to impeachment proceedings.

Northern Samar Rep. Raul Daza was one of the defense lawyers in the impeachment trial against former President Joseph Estrada.

Although he is proud of being part of the prosecution team, Daza, 77, is comfortable playing both roles.

The impeachment trial of the Chief Justice was different from Estrada’s, he added, because “the impeachment of the former President was detrimental to the country and was not supported by the majority of the Filipino people.

“We all know that he was succeeded by an administration, by Gloria Arroyo, who was accused of several illegal activities, of corruption,” Daza said.

Daza has been practicing law since 1957 after placing 11th in the bar examinations. He is also a member of the State Bar of California in the United States where he practiced law when the Philippines was under martial law and after serving as congressman, representing Northern Samar for five years.

When he returned to the country in 1986, he was appointed deputy minister of the Presidential Commission on Good Government by former President Corazon Aquino.

Throughout his political career, Daza has stayed with the Liberal Party (LP) and was LP president from 1988 to 1994.

In the 2010 elections, his son, Paul took over as governor while he returned to his old seat in Congress.

Unlike Daza, 41-year-old Tupas cannot exactly be considered as a veteran lawyer.

Although he has been a lawyer for 12 years, more than half of it is spent while serving an elective position in Iloilo.

After passing the bar in 1999, he joined the Belo Gozon Elma Parel Asuncion & Lucila Law Offices in Makati City where he became a junior partner specializing in litigation.

His wife, Yvonne Angeli Lee-Tupas, is junior partner (on leave) of the same law firm and is his chief of staff at the House of Representatives.

The couple has a daughter and a son.

But five years into his law practice, Tupas entered politics—a move expected by many in Iloilo since he belongs to one of the province’s dominant political clans whose bailiwick is in Barotac Viejo.

The eldest of seven siblings, Tupas first served as provincial board member from 2004 to 2007 representing Iloilo’s 5th district.

He was elected representative of the district in the 2007 elections defeating his cousin Enrique Suplico Jr., who ran to replace his brother former Iloilo Rep. and Vice Gov. Rolex Suplico.

Tupas was reelected in 2010 beating his estranged cousin Rolex Suplico.

“We expected him to become a politician because since law school, we knew he was already being groomed to run for a position in Iloilo,” said a schoolmate of Tupas at the UP College of Law who spoke on condition of anonymity.

More of a politician

Tupas’ schoolmate described the legislator as “in the middle of the pack” in his class at the law school.

“He distinguished himself more as a politician than as a lawyer because of his relatively short law practice in Manila,” the schoolmate of Tupas said.

The dominance of the Tupas political clan has become more prominent under the Aquino administration.

His father, former Gov. Niel Tupas Sr., was named in November last year as a director of the state-owned Philippine National Oil Co.-Exploration Corp. He ran in the fourth district congressional race last 2010 elections but lost to Ferjenel Biron.

Former Barotac Viejo town Mayor Raul Tupas, who lost to Iloilo Gov. Arthur Defensor in the 2010 gubernatorial race, is a director of the Department of Agriculture as regional technical assistant for Western Visayas and Northern Mindanao.

Their sister, Niellete Tupas-Balleza, is a national consultant of the Philippine Charity Sweepstakes Office.

Representative Tupas’ younger brother Niel Tupas III, is mayor of their hometown in Barotac Viejo where Parly Balleza, the congressman’s brother-in-law, is a councilor.

Nielex Tupas, the youngest sibling, is on his second term as Iloilo City councilor. Another brother, Nielo Tupas, is a member of the Iloilo provincial board.

In the 15th Congress, Tupas authored 26 bills and resolutions and coauthored 64 others including those on the impeachment cases of resigned Ombudsman Merceditas Gutierrez and Corona, according to the House of Representatives’ website.

About half of the bills and resolutions were of local significance like the renaming and establishment of schools and recategorization of roads.

Tupas has repeatedly dismissed criticisms that he has been pursuing the removal from office of perceived allies of former President and now Pampanga Rep. Gloria Macapagal-Arroyo because of the string of graft cases filed against his father in the past administration.

But Tupas Sr. fought the order and refused to leave the Capitol. About 200 heavily armed policemen stormed the provincial Capitol on Jan. 17, 2007, in an attempt to drag the governor out of his office.

Tupas Jr. defended his father and faced the policemen who aimed their M-16 rifles at him.

The standoff was resolved after the Court of Appeals issued a temporary restraining order, stopping the dismissal order.