MECQ back in NCR, 4 provinces: What does that mean for you? | Inquirer News
Close
menu
search

MECQ back in NCR, 4 provinces: What does that mean for you? 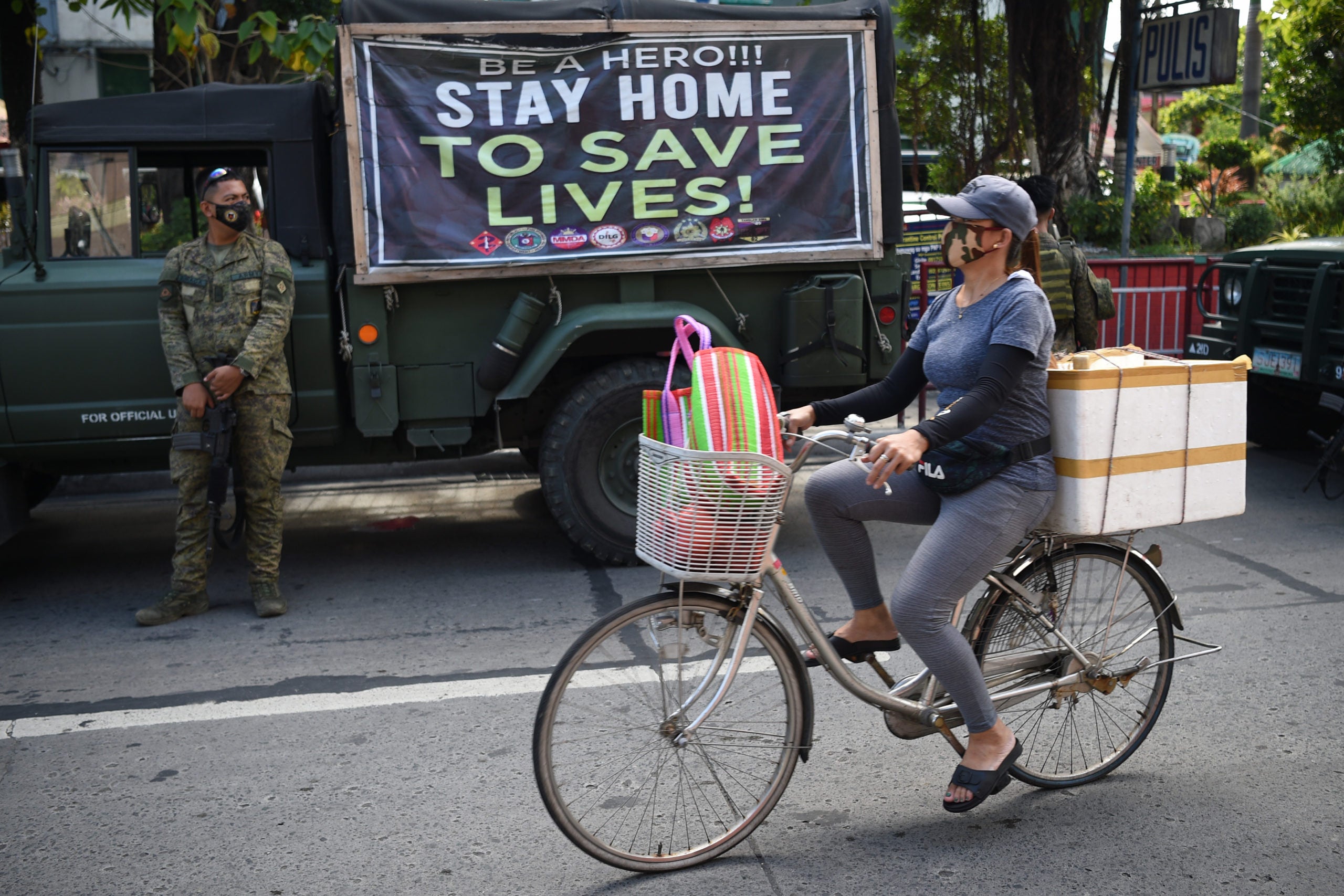 A resident rides her bicycle past armed soldiers along a street in Navotas in suburban Manila on July 16, 2020, after the local government reimposed a lockdown in the city due to increased COVID-19 infections.  (AFP)

MANILA, Philippines — After a surge in COVID-19 cases and as health workers call on the government for a break and a shift in policies, President Rodrigo Duterte announced that Metro Manila, Bulacan, Rizal, Cavite, and Laguna would revert to a modified enhanced community quarantine (MECQ).

But what does that mean, especially for Metro Manila which has been under a general community quarantine (GCQ) since June?

For starters, the MECQ was previously explained as an enhanced community quarantine status — the highest form of quarantine restriction due to the pandemic in the Philippines — but with some industries allowed to operate at 50 percent capacity.

Last May, presidential spokesperson Harry Roque said that MECQ means that some people might be allowed to move but at a limited capacity only.

Here are some more questions and clarifications that you may need:

Question: How long would the MECQ status last?

Answer: President Duterte approved MECQ for 15 days, from August 4 (Tuesday) to August 18.  However, as with any other quarantine measures in the past, the MECQ can be re-assessed and extended if the government sees the need to do so.

Q: Would I still be able to go to work under MECQ?

A: That depends on whether your job is listed among essential services, or is part of an industry allowed to continue operations although at just 50 percent capacity.

On Monday, Department of Trade and Industry (DTI) Secretary Ramon Lopez said that some establishments are still allowed at a limited scale during MECQ, but some others shops which were allowed during a GCQ status would have to stop operations for a while, like dine-in restaurants, barbershops, salons, gyms, review centers, personal grooming shops, and internet cafes.

Here is a list of industries allowed/ disallowed during MECQ, according to DTI’s Memorandum Circular No. 20-44:

However, it must be noted that public transportation would be suspended, which would be discussed in the next item.

Q: Can I leave my house?  Do I need to bring my quarantine passes/ IATF cards again?

A: The public is required to stay at home, except for workers in industries allowed by the government.  Aside from that, people may only leave their houses for essential activities like grocery runs and emergency situations.

He also said that people leaving their homes would need to bring their quarantine passes again.  Aside from that, they would have to rely on private vehicles, along with the use of bicycles and motorcycles, while industries that would remain operational should provide shuttle services for their employees.

Año noted though that local governments could decide whether tricycles would be allowed to operate.

Q: If we need quarantine passes, does this mean that police checkpoints would be placed again?

A: Yes, and this was confirmed by Joint Task Force COVID-19 Shield Commander Lt. Gen. Guillermo Eleazar.  Checkpoints will be placed in the boundaries of regions and provinces, which according to him, is meant to restrict movement across borders.

Q: Would there be other means of transportation along Metro Manila?

A: Aside from the Department of Transportation’s bus services, the Office of the Vice President has reactivated its free shuttle service although it would only be offered for frontliners and health workers.

Q: Are government employees restricted from going to workplaces again?

A: A skeleton workforce would be placed on site, while the rest are encouraged to adopt a work-from-home scheme, thus doing away with alternative work arrangements that were placed during the GCQ period.

Q: Would senior citizens be allowed to go out?

A: The government has not issued a new policy on this issue, but last May 13, Malacañang announced that senior citizens who are still part of the workforce, and who are living alone and have no others to rely on, are allowed to leave their homes.

As of now, the country’s total number of COVID-19 cases is continuously increasing, now at 106,330 after the Department of Health (DOH) reported 3,226 cases on Monday. 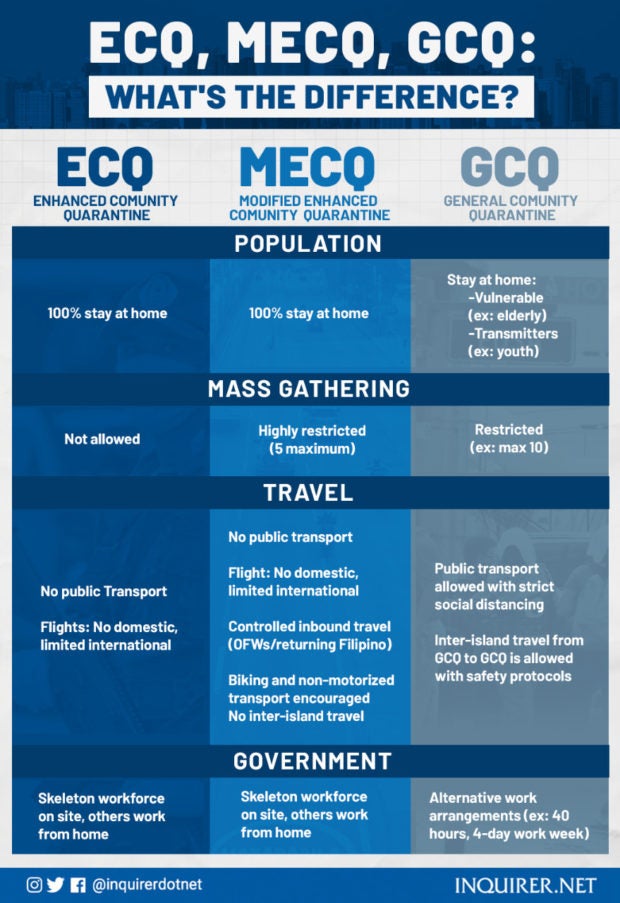 READ: Been there, done that but what’s the difference between MECQ and GCQ?