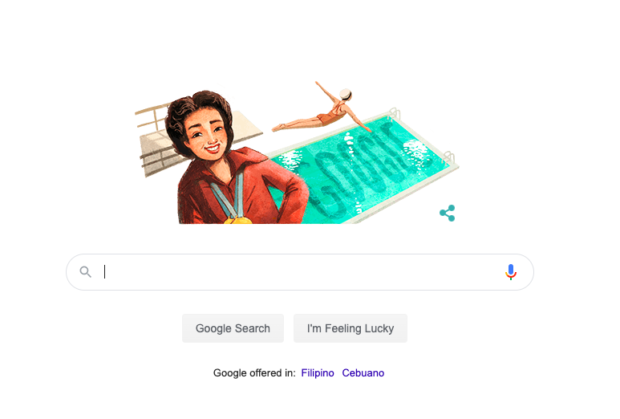 Google showcased a doodle of Draves wearing her gold medals, with a background of an image of a woman diving to a pool that contains the letters of the search site.

In its description of the doodle, Google noted that on August 3, 1948, the Fil-Am diver won the gold medal in the women’s three-meter springboard event at the London Summer Olympics.

“Victoria Draves was born Victoria Taylor Manalo in the South of Market district of San Francisco on December 31st, 1924. Growing up, she and her family often hopped on the trolley to the enormous Fleishhacker Pool to swim and watch the divers. When she was a teenager, a member of a local swim team asked if she wanted to learn to dive, and she eagerly accepted, springboarding her into the sport she went on to champion,” narrated Google.

“After thousands of dives to perfect her form and three consecutive U.S. National Diving Championship platform titles, Draves earned a spot at the 1948 Summer Olympics in London. She dominated the games one faithful leap at a time and made history as the first woman to take home the gold in both the platform and springboard events,” it added.

“Thank you, Vicki Draves, for inspiring people everywhere to aim high and take the plunge!” the search engine also said.