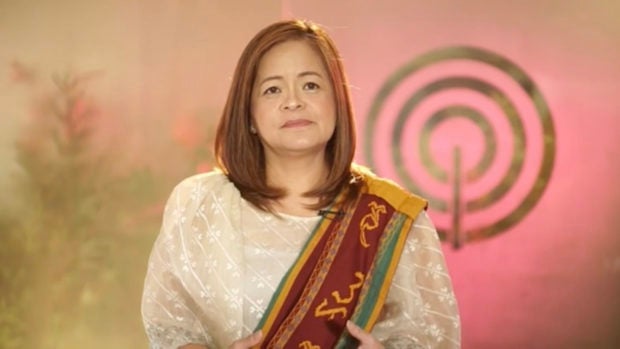 ‘YOU DO NOT BACK DOWN’ Screenshot of ABS-CBN’s Ging Reyes addressing her audience of UP graduates via online.

MANILA, Philippines — The news chief of embattled broadcasting network ABS-CBN on Sunday addressed an online audience of mass communication graduates, urging them to maintain “integrity and courage not just to fight difficult battles but also to accept failures.”

ABS-CBN news chief Ging Reyes was guest of honor at the first online recognition rites of the University of the Philippines’ College of Mass Communication.

She said the news profession must acknowledge its flaws and learn from them.

“Many would say that my trip to Congress last month was a lesson on media accountability and humility. I couldn’t agree more,” Reyes said in her video speech addressed to the college’s 149 Batch 2020 graduates.

Off the air, no franchise

“I owned up to mistakes we committed in the past, I explained how errors are rectified and those responsible for them disciplined. I disclosed our internal protocols for dealing with complaints and ethical violations,” she said.

ABS-CBN signed off when the National Telecommunications Commission ordered it to stop its broadcast a day after the network’s 25-year franchise expired on May 4.

On July 10, the House committee on legislative franchises voted to deny ABS-CBN a new franchise on the grounds that it violated the constitutional ban on foreign ownership of media companies in the country, among other reasons.

President Rodrigo Duterte had earlier advised the Lopezes, the network’s owners, to just sell the business. The President’s beef with the company stemmed from its failure to air his campaign ads in the 2016 presidential election.

Despite the news being an “imperfect profession,” Reyes said she also learned “how the war on truth can take an even more dangerous path,” as it culminated with the shutdown of the country’s leading network.

“Politicians try to tell you how to do your job, how headlines should be written, how long you should wait until they give you their side, how bad news hurts their image,” Reyes told the graduates.

Yet, she said, “you do not back down, you do not apologize for the journalism principles on which you stand, you do not abandon the constitutional right that gives you the freedom to say and do something about what’s wrong in the world.”

Reyes said the network would have to draw from its “wellspring of creativity and collaboration” as it tried to move forward.

Necessity also drives innovation, she said, as ABS-CBN had to look for alternative ways to deliver services and reach viewers across the country after failing to get a new legislative franchise.

“As news chief for the last 10 years, I had to deal with a number of painful memories arising from bad decisions, missed opportunities and just recently, the impact of losing a franchise,” said Reyes.

She added that “these are character-building experiences that allow you to self-reflect, recover and aim higher next time.”

It took the seasoned journalist two decades to finish her college education from the UP College of Mass Communication, Reyes told her audience.

Even without a degree, she managed to join ABS-CBN as a production assistant and worked as an executive producer for award-winning newscast “The World Tonight” in the 1990s.

Reyes said her show’s cancellation was an opportunity to return to school and finish her degree in broadcast communication in 2000.