Remaining South Korean trash to be shipped back Aug. 4 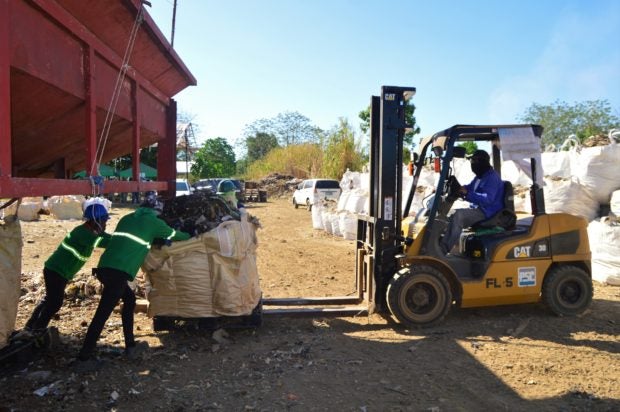 STORED Workers put the Korean garbage into bags before they are stored in containers at the Phividec Industrial Estate facility in Tagoloan town, Misamis Oriental province, on March 3. The last batch of the trash will be sent back to South Korea on Aug. 4. —JIGGER J. JERUSALEM

CAGAYAN DE ORO CITY, Misamis Oriental, Philippines — The Bureau of Customs (BOC) here said the remaining 80 containers of waste from South Korea stored in Tagoloan town, Misamis Oriental province, in the last two years would finally be shipped back to the country’s Pyeongtaek City on Tuesday.

John Simon, BOC-10 (Northern Mindanao) district collector, announced that the last of the imported waste that arrived here in 2018 would be loaded on the vessel at the Tagoloan port on Aug. 4 to be sent back to where it came from.

“It will be loaded on board the vessel BF Mahia, and it will be shipped to its point of origin,” Simon told the Inquirer in a text message on Sunday.

As a precautionary health measure, however, reporters who covered the sendoffs of the previous batches of the toxic waste, local government officials and the BOC-10’s partner organizations such as EcoWaste Coalition were no longer invited to witness the event, Simon said.

The garbage—part of the estimated 6,500 metric tons of toxic waste that arrived at the Tagoloan port in July and October 2018—was supposed to be shipped back to South Korea early this year but the operation had been put on hold due to the threat of the new coronavirus disease (COVID-19).

The ship that was to carry the trash was not allowed to leave the port in China last March due to the surge of the COVID-19 infection, Simon said.

So far, the BOC had sent back 200 containers of Korean waste since January 2020, he added. The BOC had already shipped back 51 containers to South Korea in January 2019.

The assorted garbage, composed of discarded plastics and other items, arrived in Misamis Oriental in 2018, supposedly to be used as raw materials for the plastic recycling facility of its importer, Verde Soko Philippines Industrial Corp.

The BOC in Northern Mindanao, however, seized the item wrongfully declared as “plastic synthetic flakes” and stored it at the Verde Soko facility inside the Phividec Industrial Estate zone in Sitio Buguac, Barangay Sta. Cruz of Tagoloan town.

Aside from “misdeclaring” the item, the company also failed to secure an import permit from the Department of Environment and Natural Resources.

The environmental group EcoWaste Coalition lauded the final shipment of the Korean waste as a victory for those fighting for environment protection in the country.

“We’re thrilled to get a confirmation from port collector Simon that the last batch of 80 shipping containers of contaminated plastic wastes from South Korea will be finally sent back,” said Aileen Lucero, EcoWaste Coalition national coordinator.

She said the reexportation of the illegal waste shipments had been a big win for environmental justice and a strong affirmation of the rule of law.

“While we cannot be physically present for the sendoff rites due to COVID-19 travel restrictions, we reiterate our support for the unswerving efforts of customs and local government officials to put this dumping controversy to rest,” Lucero said.