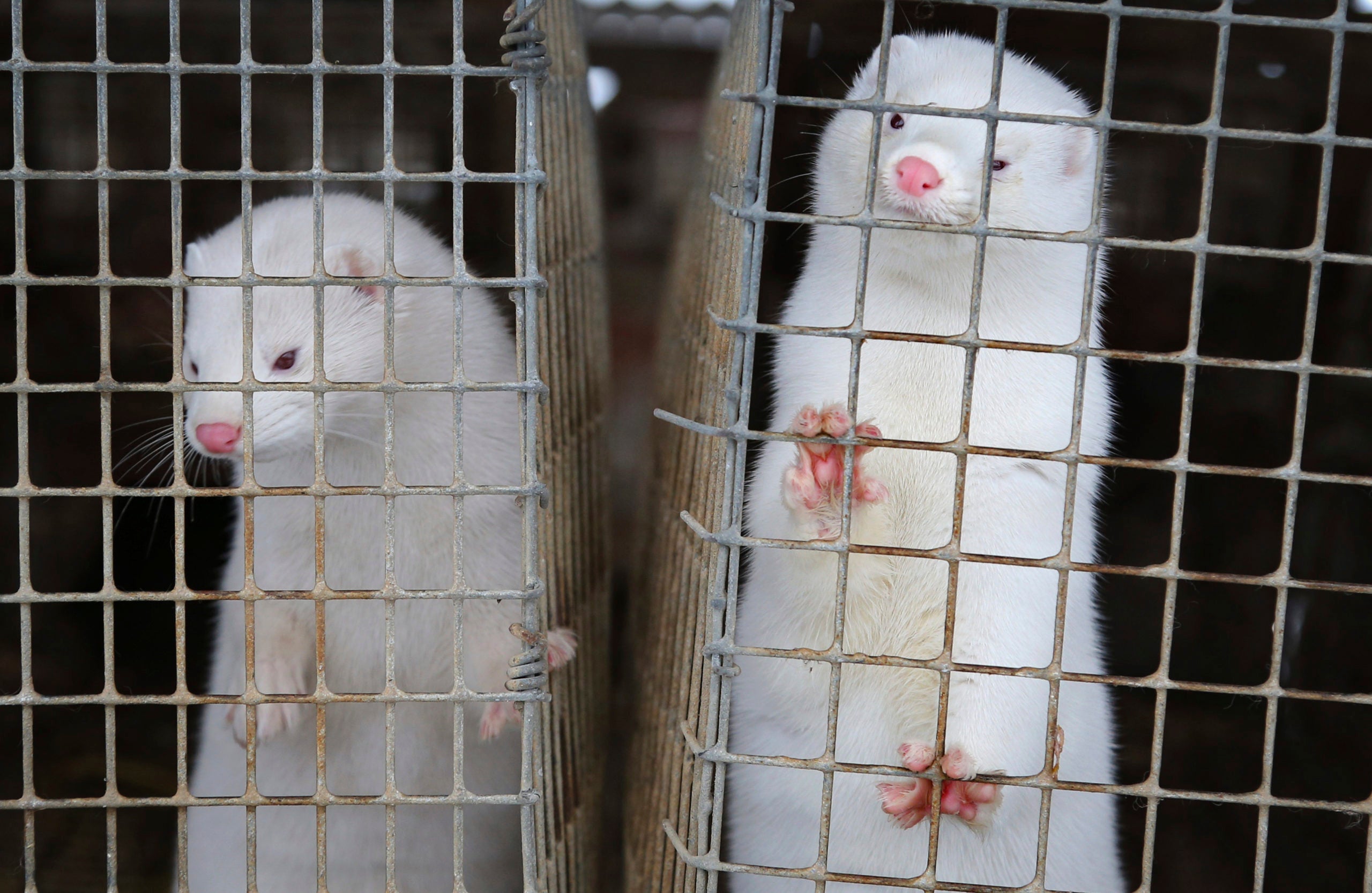 FILE – In this Dec. 6, 2012, file photo, minks look out of a cage at a fur farm in the village of Litusovo, northeast of Minsk, Belarus. Coronavirus outbreaks at mink farms in Spain and the Netherlands have scientists digging into how the animals got infected and if they can spread it to people. (AP Photo/Sergei Grits, File)

MADRID  — Coronavirus outbreaks at mink farms in Spain and the Netherlands have scientists digging into how the animals got infected and if they can spread it to people.

In the meantime, authorities have killed more than 1 million minks at breeding farms in both countries as a precaution.

The virus that first infected people in China late last year came from an animal source, probably bats, and later spread from person to person, as other coronaviruses had done in the past.

Some animals, including cats, tigers, and dogs, have picked up the new coronavirus from people, but there hasn’t been a documented case of animals spreading it back to humans.

The outbreaks among the minks on farms in the Netherlands and Spain likely started with infected workers, although officials aren’t certain. But it also is “plausible” that some workers later caught the virus back from the minks, the Dutch government and a researcher said, and scientists are exploring whether that was the case and how much of a threat such a spread might be.

The outbreak at the Spanish mink farm near La Puebla de Valverde, a village of 500 people, was discovered after seven of the 14 employees, including the owner, tested positive in late May, said Joaquín Olona, regional chief of agriculture and environment. Two other employees got infected even after the operation was shut down.

More than 92,000 minks were ordered killed at the farm in the Aragon region of northeastern Spain, with nine out of 10 animals estimated to have contracted the virus.

After the Dutch outbreaks began in April, professor Wim van der Poel, a veterinarian who studies viruses at Wageningen University and Research, determined that the virus strain in the animals was similar to the one circulating among humans.

“We assumed it was possible that it would be transmitted back to people again,” the virus expert said, and that’s what appeared to have happened with at least two of the infected workers.

Richard Ostfeld, a researcher at the Cary Institute of Ecosystem Studies in Millbrook, New York, said that if confirmed, these would be the first known instances of animal-to-human transmission.

“With the evidence for farmed mink-to-human transmission, we definitely need to be concerned with the potential for domesticated animals that are infected to pass on their infection to us,” Ostfeld said by email.

The U.S. Centers for Disease Control and Prevention says some coronaviruses that infect animals can be spread to humans and then spread between people,  but it adds that this is rare.

Both the World Health Organization and the Paris-based World Organisation for Animal Health are studying the transmission of the virus between animals and people. Several universities and research institutes also are examining the issue.

The WHO has noted that the transmission on the mink breeding farms could have happened both ways. But WHO’s Dr. Maria Van Kerkhove said at a news conference last month that such transmission was “very limited.”

“This gives us some clues about which animals may be susceptible to infection and this will help us as we learn more about the potential animal reservoir of (the virus),” she said, referring to cases in the Netherlands and Denmark, another major producer of mink fur.

While scientists think the virus originated in bats, it may have passed through another animal before infecting people. A WHO team is currently in China, planning to study the issue.

More than 1.1 million minks have been killed on 26 Dutch farms that recorded outbreaks, according to the Netherlands Food and Consumer Product Safety Authority. The government announced Thursday that minks at a 27th farm also were infected and would be killed.

The Netherlands, which has some 160 mink farms, is the world’s fourth-biggest producer of the prized fur after Denmark, China and Poland, according to Wim Verhagen, director of the Dutch federation of fur farmers. Spain has 38 active mink breeding operations, most of them in northwestern Galicia.

Both Spain and the Netherlands have tightened hygiene protocols at mink farms and banned transportation of the animals and visits to the buildings where they are kept.

China, which produces about a third of the mink fur market, and the United States have not reported any virus outbreaks in minks or in animals at other farms.