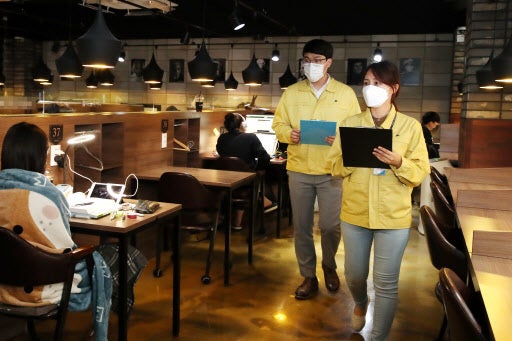 SEOUL — A new cluster of coronavirus infections was found at a franchise coffee shop in southern Seoul as South Korea saw the number of COVID-19 cases hover around 30 for three days straight over the weekend.

The initial patient visited the cafe and then a restaurant, infecting eight others so far. How the person contracted the virus was yet to be identified, according to the Korea Centers for Disease Control and Prevention.

Korea reported 30 new COVID-19 cases on Sunday, 22 imported from overseas and eight locally transmitted. That followed Saturday’s 31 new cases, 23 of which having come in from overseas. The country’s total caseload as of Sunday was 14,366.

Welfare and Health Minister Park Neung-hoo said Sunday at a briefing that the virus situation in Korea is being controlled stably in terms of both containing outbreaks and treating patients, while calling for continued adherence to quarantine rules in daily lives.

For the past two weeks between July 19 and Aug. 1, the country saw an average 16.9 cases of local infection per day. During the same period, the number of daily imported cases was 27.7. The source of infection for 6.6 percent of the patients remains unidentifiable, according to the KCDC.

Seventeen cases were identified during the quarantine screening process at the border, while five were detected while the individuals were under mandatory self-quarantine in Korea.

A total of 22 people tested positive for the coronavirus among the 72 people who returned home from construction sites in Iraq on Friday.

As for locally transmitted cases, five were registered in Seoul and one each in Gyeonggi Province, North Gyeongsang Province and Busan. The cases are linked to several clusters, including a nursing home in western Seoul (where 31 cases have originated in total) and a franchise coffee shop in southern Seoul. (9)

In Gwangju, where social distancing campaign had been tightened on July 2 amid spread of the coronavirus linked to door-to-door marketing events and religious facilities, the distancing rules will be eased starting Monday as the city has seen no cases for the past week.

Under the relaxed distancing rules, public facilities, nurseries and welfare centers will open in phases, and a ban on larger gatherings — with more than 50 people indoors and more than 100 people outdoors — will be lifted. A baseball stadium will be open to spectators again.

So far, 13,259 people, or 92.29 percent, have been released from quarantine upon making full recoveries, up 26 from a day earlier. Some 806 people are receiving medical treatment under quarantine. Thirteen people remain in serious or critical condition.