Fires in Brazil’s Amazon up 28% in July, worrying experts

BRASILIA, Brazil  — Fires in the Brazilian Amazon increased 28% in July from a year ago, a state agency reported Saturday. 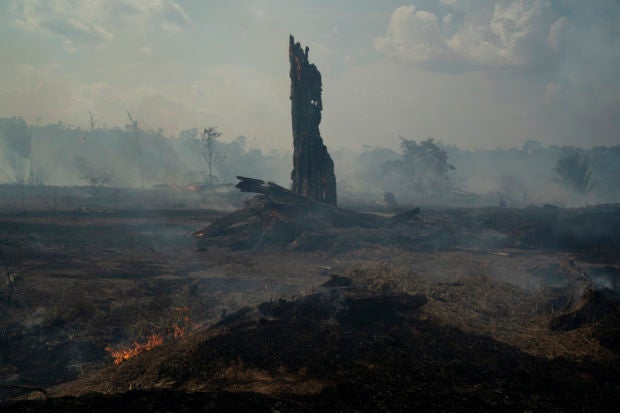 In this Aug. 26, 2019 photo, the land smolders during a forest fire in Altamira in Brazil’s Amazon. The fire is very close to Kayapo indigenous land located on the Bau indigenous reserve. (AP Photo/Leo Correa)

The National Institute for Space Research, which is responsible for monitoring Brazil, said it recorded 6,803 fires in the Amazon rainforest last month, compared to 5,318 in the same month of 2019.

Environmentalists expressed concern at the rise because August traditionally marks the beginning of the fire season in the region. They fear Brazil could repeat the surge seen in fires last August, when 30,900 fires were recorded by the institute.

The sharp increase in fires comes amid domestic and international concern over President Jair Bolsonaro’s calls to clear land in Brazil’s Amazon to drive economic development.

Addressing those concerns, on July 16, the government banned burning in the Pantanal wetlands and the Amazon forest for four months. Bolsonaro also issued an order in May for the military to coordinate environmental actions in the Amazon.

But experts said the fire numbers indicate the government’s response is not being effective and also point to the possibility that this year’s dry season will be even more prone to fires than last year.

Carlos Nobre, a researcher at the Advanced Studies Institute in the State University of Sao Paulo, said the deforestation index also has remained high this year until July, compared to the last couple of years.

“We can conclude, with data until the end of July, that the effectiveness of government actions to reduce fires and deforestation is low,” he said.

Carlos Rittl, senior fellow at the Institute for Advanced Sustainability Studies in Germany, also told The Associated Press that trends in the Amazon are worrisome.

“The tendency is that this will be a more dry year than 2019 and this makes it easier for the fire to spread,” he said.