UP-backed genome center on the trail of coronavirus | Inquirer News

UP-backed genome center on the trail of coronavirus 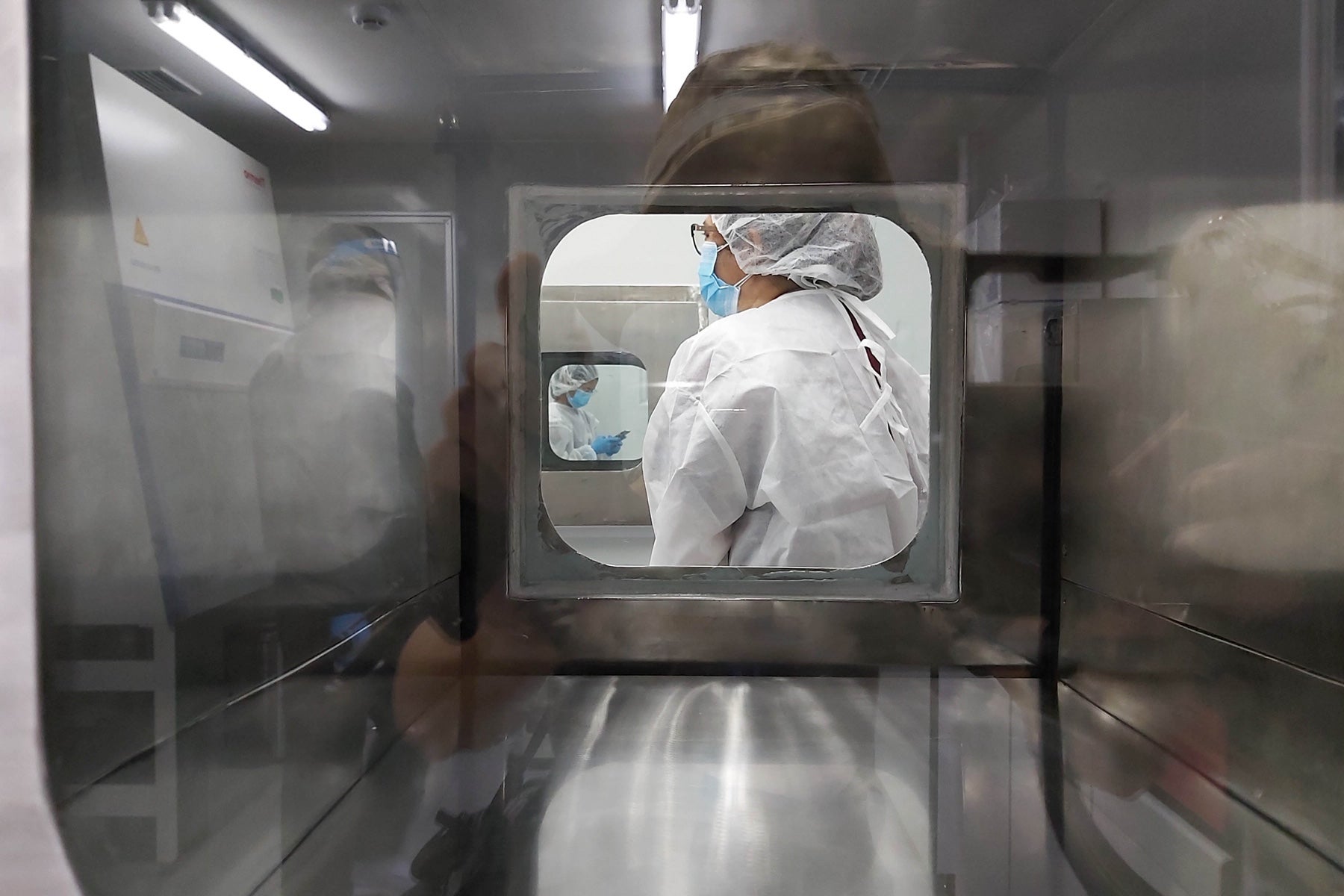 FRONT-LINE LAB A metal safety box facilitates the movement of swab samples processed at the newCOVID-19 molecular diagnostic laboratory at the University of the Philippines Los Baños in Laguna. The laboratory and its teamof scientists will be in the front line of the country’s battle against the coronavirus. —CHRIS QUINTANA

LOS BAÑOS, LAGUNA—Researchers at the Philippine Genome Center (PGC) are working round the clock to trace the “route” of SARS-CoV-2, the virus responsible for the new coronavirus disease (COVID-19) that has been ravaging populations around the Philippines since March.

Knowing when and how, and which country the particular strain traveled from, should help government decision-makers deal with border controls, as well as with thousands of returning or departing migrant workers, said Cynthia Saloma, PGC executive director, in a recent online interview.

How the virus spreads in communities and the diverse host response should also determine which among prospective vaccines being developed around the world would be “useful” for Filipinos, she said.

More encompassingThe coronavirus has so far infected at least 90,000 and killed more than 2,000 in the Philippines.

Since the start of the pandemic, PGC, the genomics research unit of the University of the Philippines (UP), has been conducting “whole-genome sequencing,” or analyzing ribonucleic or deoxyribonucleic acid (RNA/DNA) patterns of SARS-CoV-2 by use of the modern “next generation sequencing” equipment called NovaSeq 6000.

Whole-genome sequencing is more encompassing than the widely accepted reverse transcription-polymerase chain reaction (RT-PCR), in the sense that it provides scientists more information about SARS-CoV-2.

The RT-PCR analyzes only “one to three regions” of the genome to determine whether a person is positive or negative for the disease.

The cost, however, of the NovaSeq 6000, limits its use to a few core laboratories such as that of the PGC.

UP’s initiative to trace the virus’ country of origin was brought up by university president Danilo Concepcion during the opening of a molecular laboratory at UP Los Baños on July 10. 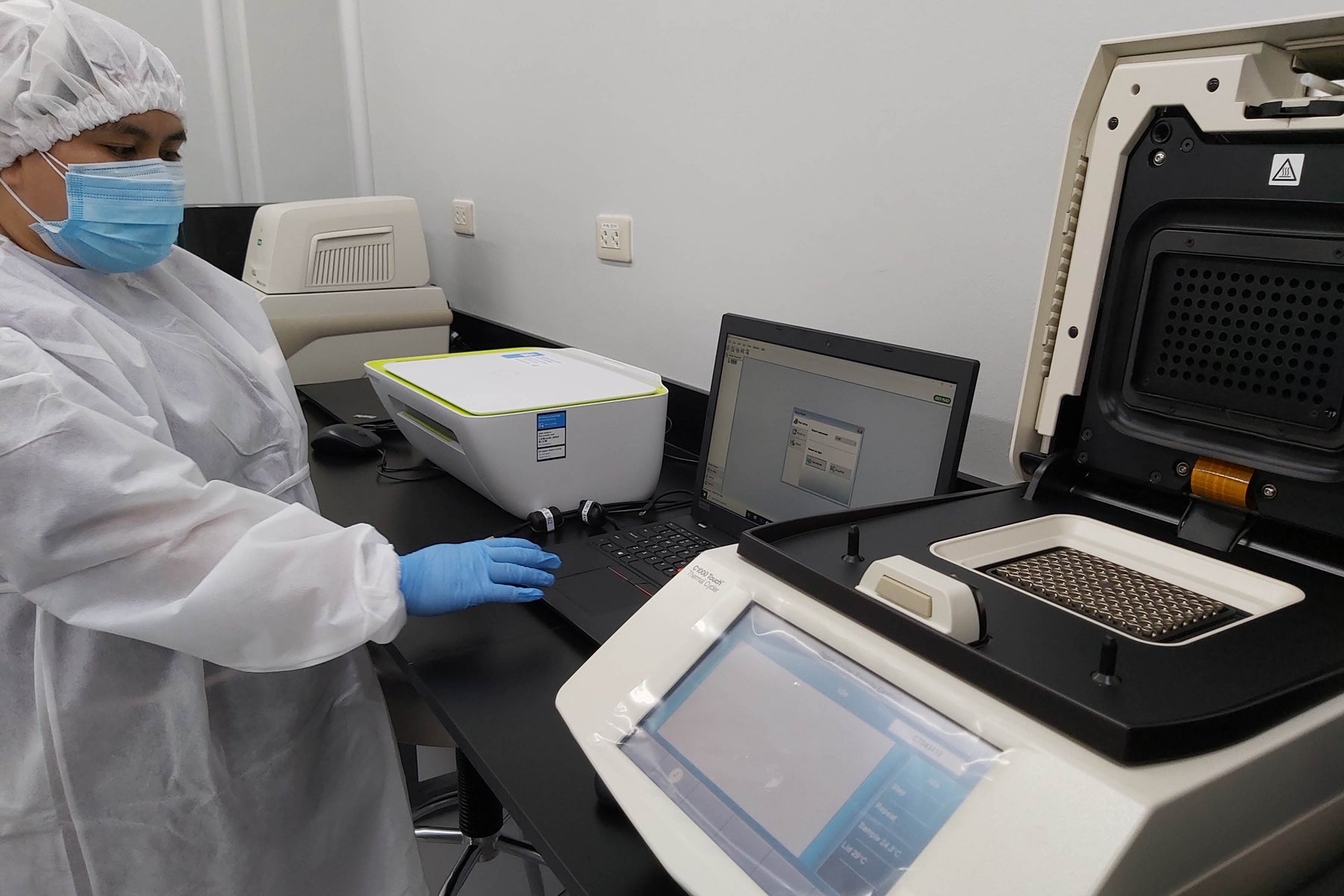 GEARING UP A technician inspects machines and other equipment as the University of the Philippines Los Baños’ molecular diagnostic laboratory prepares to help track down and document COVID-19 transmission in the country. —CHRIS QUINTANA

While the earliest published genomic sequence of SARS-CoV-2 was collected from the city of Wuhan in China, “it’s also interesting that as early as October [2019], some people in France were getting sick with what they thought was flu but turned out to be coronavirus,” Saloma said.

She also cited recent Oxford University studies that showed that the virus was “most likely existent or circulating as early as October 2019 in Europe.”

Whole pictureThe Philippines, through the PGC-DNA Sequencing Core Facility (DSCF) and the Research Institute for Tropical Medicine, has so far “deposited” 13 whole-genome sequences collected from patients in Metro Manila to the Global Initiative on Sharing All Influenza Data (Gisaid).

Gisaid, with already over 7,000 genome sequences, is a worldwide database, or data-sharing platform, on which scientists and researchers rely for information to develop test kits and potential vaccine.

“It is also important that we have access to earlier samples [of genomes] that entered the Philippines and how [the virus] evolved locally. We want to get the whole picture [of the pandemic] not only in Luzon, but also in the Visayas and Mindanao,” Saloma said.

BiosurveillanceTo increase the Philippines’ biosurveillance, PGC is requesting a P19-million fund, through the Department of Science and Technology, so it can sequence “hundreds more” of genomes.

By doing so, DSCF head Benedict Maralit said the country would contribute to global efforts to fight the virus.

“What we aim at … is [biosurveillance] at a national scale using next generation sequencing [which] surpasses, in a way, the sensitivity of the RT-PCR because it targets the whole genetic signature of the SARS-CoV-2,” Maralit said.

He said this should also allow them to check for “sensitivity,” or whether the testing kits were still effective in detecting the virus, considering that it was constantly mutating.