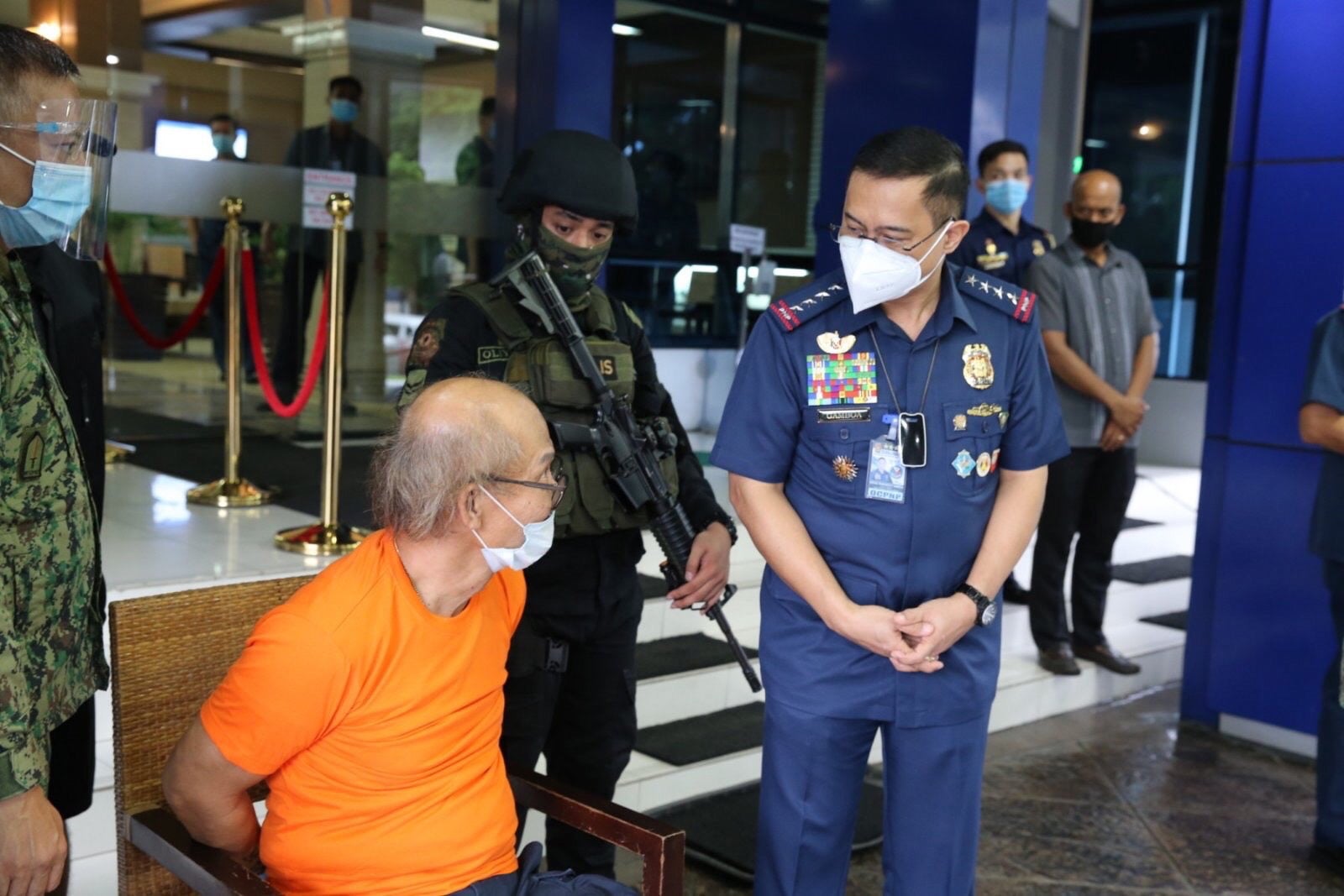 Cult leader and former Dinagat Islands Rep. Ruben Ecleo Jr., the country’s most wanted fugitive who carried a P2-million bounty on his head, was arrested early on Thursday by the police.

“All the good times should come to an end,” Ecleo told reporters at the headquarters of the National Capital Region Police Office (NCRPO) where he was taken following his arrest in San Fernando City, capital of Pampanga province.

He commended the police for the arrest of Ecleo, whom he described as the “Philippines’ most wanted fugitive.”

“The arrest of Ecleo will send a chilling message to all other fugitives: You can run but you cannot hide,” Gamboa said.

Ecleo, 60, has been on the lam since 2011 after he jumped bail while he was on trial for the 2002 murder of his wife, medical student Alona Bacolod.

He was convicted of murder in 2012 by the Cebu City Regional Trial Court (RTC). The conviction was affirmed by the Court of Appeals.

He was convicted in 2006 by the Sandiganbayan of three counts of graft and corruption for the illegal construction of a public market and a municipal building and the repair and rehabilitation of a building owned by his family’s cult while he was mayor of San Jose town, Dinagat Islands, in Surigao del Norte from 1991 to 1994. The Supreme Court affirmed the antigraft court’s decision in 2010.

Ecleo was first arrested in June 2002 after a gunbattle between the police and members of his cult, the Philippine Benevolent Missionaries Association (PBMA), that left at least 23 of his followers dead.

Police officers were serving an arrest warrant for the Jan. 5, 2002, murder of his wife whom he strangled in their home in Cebu City.

Her body was found three days later inside a garbage bag dumped in a ravine in Dalaguete City, south of Cebu.

Lawyer Fritz Quinanola, who spoke on behalf of the four other private prosecutors in the murder case, said putting Ecleo behind bars was a perfect end to hopes of making the former lawmaker pay for his crimes.

“We’re very happy. At least, our efforts didn’t go down the drain. I’m sure the Bacolod family is very happy,” he said in a phone interview.

Angelito Bacolod, one of the three remaining siblings of Ecleo’s murdered wife, said that while they were happy that Ecleo had been convicted, their lives would never be the same again.

“We are no longer intact. It’s really different. [But] we have to start moving on. We have to trust in God,” he said.

Five months after Bacolod was murdered, her siblings Ben and Evelyn, and their parents Rosalia and Elipidio, were killed inside their homes in Mandaue City by an alleged Ecleo supporter who died in a shootout with policemen.

Aside from sentencing Ecleo to at least 30 years in prison, Cebu RTC Judge Soliver Peras ordered him to pay P25,650,000 in damages to Alona’s heirs.

The verdict capped nine years of a parricide trial against Ecleo, who was the “supreme master” of the PBMA, which was founded by his father in the 1960s.

Sinas said it took them six months to track down Ecleo under “Coplan Almighty.”

He said they received information from an agent based in the Dinagat Islands six years ago that Ecleo had moved to Metro Manila to hide. They later received “credible information” that he was in Angeles City.

Gamboa said at least four or five officers would be promoted for Ecleo’s arrest.

He did not say who would receive the P2-million reward for the arrest, which was offered in 2012 by then President Benigno Aquino III.

At the NCRPO, Ecleo cheerfully answered reporters questions on how he managed to hide for so long.

“I don’t really know,” he chuckled, but admitted he sometimes used disguises. His followers also helped him, with one “donating” the van he was using, he added.

“I know that life is really hard when you get imprisoned,” he said. “Many times I think about surrendering because I fear for my family’s safety. But here I am, so their suffering should end. I just want to peacefully see my family visiting me behind bars.” —WITH REPORTS FROM ADOR VINCENT MAYOL AND TONETTE OREJAS