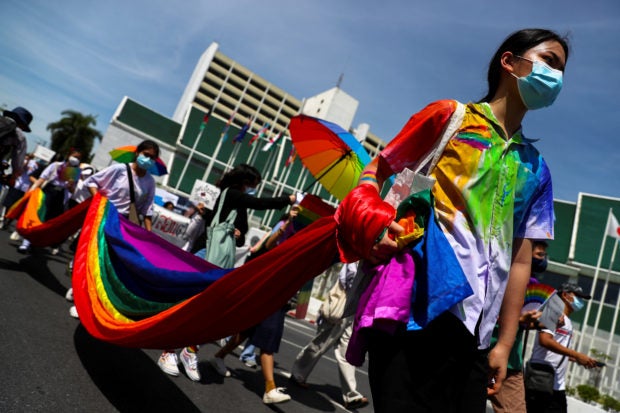 Members of a youth pride student group hold an LGBT flag during a rally for gender rights in Bangkok, Thailand July 29, 2020. Image: Reuters/Athit Perawongmetha TPX IMAGES OF THE DAY

BANGKOK — Dozens of students rallied in Thailand on Wednesday to demand from the government greater gender rights and an end to what they called outdated curriculum and discriminatory rules on uniforms and haircuts.

Onlookers in Bangkok cheered and applauded as students of mixed ages carrying placards and banners and rainbow flags, fans and umbrellas marched to the education ministry in protest at a school system they said was far behind the times. The group included secondary school pupils and some older students.

They took aim in particular at rules that prescribe specific hair length and styles for male and female students.

“What about students of other genders? This is something the ministry needs to consider because it is normal to be diverse,” said Panupong Suwannahong, 19, a protest organizer.

The demonstration comes amid an increase in student-led political protests in Thailand in recent weeks. The group, however, said it had no ties to an anti-government movement.

On the steps of the ministry and in front of its permanent secretary, student Pimchanok Nongnual, 19, shaved her hair with electric clippers in protest at “suffocating” gender rules.

“What about gender fluid or non-binary students?” said Pimchanok.

Although it is a largely conservative Buddhist society, Thailand has a reputation for openness and free-wheeling attitudes and has a vibrant lesbian, gay, bisexual and transgender (LGBT) social scene.

Its cabinet backed a civil partnership bill on July 8 to recognize same-sex unions with almost the same legal rights as married couples, in one of Thailand’s most liberal moves yet.

However, activists say its education system is reluctant to respond to changing attitudes. Nattapat Satavelarot, 17, tore up a textbook on health and hygiene, rejecting what he called a discriminatory curriculum.

“I want teachers to be educated about LBGTQ rights and they need to understand that students consisting of many genders is not a taboo,” Nattapat said. NVG