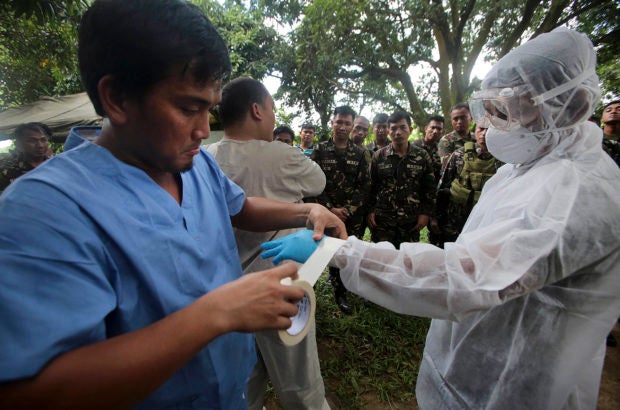 DIFFERENT BATTLE ZONE In this photo taken in 2017, Army soldiers are assisted by veterinarians in the proper wearing of protective equipment as they prepare to enter a poultry farm in San Luis, Pampanga—a different battle zone where they will help contain the outbreak of bird flu. —GRIG C. MONTEGRANDE

MANILA, Philippines — The Department of Agriculture (DA) on Tuesday confirmed the resurgence of avian influenza, or bird flu, in a town in Pampanga province, three years since it first struck the area that resulted in the culling of over 300,000 birds there.

New cases of the H5N6 strain were detected at a poultry layer farm in San Luis town where close to 39,000 egg-producing chickens were culled and disposed of to control the spread of the disease, said Crispulo Bautista, the DA director in Central Luzon.

Field investigations conducted by the Bureau of Animal Industry (BAI) showed that the bird flu may have been caused by migratory birds in the area. These birds have been blamed for bird flu outbreaks in many countries, including the Philippines.San Luis is close to the Candaba swamp, where about 4,000 to 10,000 birds take refuge from October to February.

The DA said measures had already been employed to contain and control the avian flu at ground zero. Disease surveillance is also being conducted around the infected farm in San Luis.Consumers were also assured that the disease had not been reported and detected among broilers, the primary sources of poultry meat.

Last week, the BAI declared Jaen town in Nueva Ecija province as bird flu-free, four months since an outbreak was announced there.

This was also the second time after 2017 that San Luis farms were stricken with bird flu. At that time, the town took four months to resume egg production after sentinel chickens were certified by the BAI to be noninfected.

—With a report from Tonette Orejas