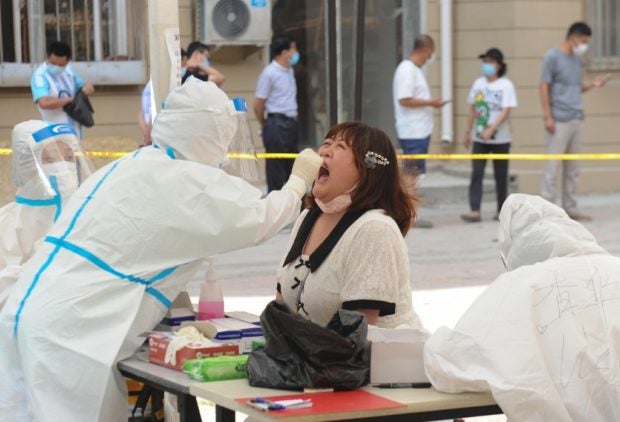 A health worker carries out a COVID-19 coronavirus test on a resident at a makeshift testing centre in Dalian, in China’s northeast Liaoning province on July 28, 2020. A fresh coronavirus cluster in Dalian has spread to other provinces and prompted fresh restrictions, authorities said on July 28, as Beijing scrambles to prevent a second wave of infections. Photo by STR / AFP

Of the new cases, 98 were domestic infections, mostly in the northwestern region of Xinjiang, where a growing cluster first discovered earlier this month has prompted mass testing and restrictions.

China — where the global outbreak first emerged — had largely brought domestic transmission under control through targeted lockdowns, travel restrictions and testing. But sporadic regional outbreaks have illustrated the difficulty of keeping the virus at bay.

The last time it recorded so many new cases was April 13, when 108 infections were confirmed — mostly imported.

Authorities have concentrated their attention on a cluster which emerged last week at a food processing plant in Dalian, in the northeastern province of Liaoning. Officials said workers there handled contaminated packaging of imported seafood.

Fifty-two cases have been confirmed in the major port city in the past week, of which 30 involved employees at the factory.

More than three million people have been tested in Dalian and Zhao Lian, head of the city’s health commission, said Wednesday that enclosed public venues — including libraries, gyms, bars, museums, restaurants and spas — would be closed.

During an inspection tour to the city this week, Vice Premier Sun Chunlan urged local authorities to increase oversight of imported goods, as well as of any people leaving Dalian, state news agency Xinhua reported Tuesday.

“The task of prevention and control is still arduous, and there should be no slacking,” Sun was quoted as saying.

Following a June outbreak in Beijing which infected more than 300 people, Dalian authorities are using a similar targeted approach to implement virus control measures on different districts of the city based on their risk levels.

In total, 84,060 people have been infected with coronavirus in China, of whom 482 remain hospitalized. There have been 4,634 related deaths, according to an official count.