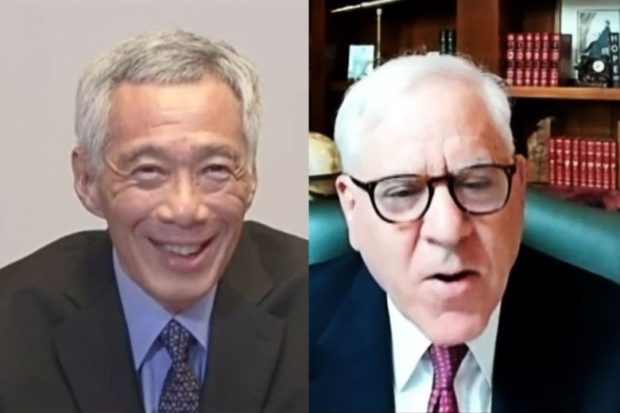 PM Lee taking part in a live dialogue with David Rubenstein, as he discusses recent US-China tensions and the global Covid-19 pandemic with the Atlantic Council. FACEBOOK/PM LEE via The Straits Times/Asia News Network

WASHINGTON — Singapore hopes the United States is able to stabilize its relationship with China, because Asia depends on stable ties between the two countries to have a secure and predictable environment to prosper, said Prime Minister Lee Hsien Loong on Tuesday (July 28).

He made the point in an online interview when American businessman David Rubenstein had asked him what he would say to an incoming US president seeking advice on how to strengthen the country’s relationship with Asia.

PM Lee said he would also encourage the next President, be it Republican President Donald Trump who is running for re-election or his Democratic rival Joe Biden, to develop a bipartisan consensus on US-Asian relations so that American foreign policy would last beyond the President’s administration.

He cited how the previous Obama administration’s rebalance towards Asia had been supported by many Asian countries, but the Trump administration had a different take on the issue, wanting Japan and South Korea to pay more for the US troops stationed on their soil.

“If you can establish a stable, predictable policy with bipartisan consensus, I think it would be a great help to all your friends and partners who want to be able to depend on you and to rely on you, without the risk that one day the big power may suddenly decide its interests lie elsewhere,” he said.

PM Lee also urged Washington to find a way to return to the Trans-Pacific Partnership mega trade pact it had withdrawn from at the start of the Trump administration.

Worries about the direction of US-China relations featured heavily in the interview on Asia’s response to tensions between the two major powers and Covid-19, hosted by Washington-based think tank Atlantic Council.

PM Lee called the US-China tensions very unfortunate, saying: “Actions have been taken which have provoked counter actions, and the issues have metastasized and spread into all fields of the relationship…

“The way things have developed over the last several years, you have very many areas where there’s not only contradiction, but also deep distrust and this is corrosive and it’s making a very difficult relationship very dangerous.”

PM Lee in a live dialogue with the Atlantic Council, discussing US-China tensions and COVID-19.

#FBLive: PM Lee taking part in a live dialogue with David Rubenstein, as he discusses recent US-China tensions and the global COVID-19 pandemic with the Atlantic Council.

He noted the relationship historically tends to get tangled with presidential campaigns in election years but that things settle down after the new administration settles in.

But this year’s election – due on November 3 – and its aftermath may be different, he said.

“I’m not sure whether it will happen this time because the feel is quite different, and the degree of animus and… bipartisan consensus on treating China as a threat is quite extraordinary. I fear that it may carry on past the election and if it does, I think that bodes ill for the world.”

“Maintaining that balance and for the US to be able to play that role, and tend to your many interests and your many friends and your influence in the region, I think that requires a significant amount of attention from the United States policy establishment,” he said. “Otherwise, a part of the world which has been crucial to you since the Second World War may become a problem rather than an asset to you.”

The dialogue was moderated by Mr Rubenstein, who heads the American private equity firm The Carlyle Group and is chairman of the US nonprofit think tank Council on Foreign Relations.

Mr Rubenstein asked if PM Lee was worried that China’s tech companies would become so dominant that Singapore would be dependent on them for technology, noting that the US government had expressed concerns that telecommunications equipment from Chinese tech giant Huawei could pose threats to national security.

PM Lee said Singapore did business with Huawei and did not exclude it from its 5G network bidding process, although Huawei was not chosen this time round.

Noting that no system was 100 percent secure, he said: “It’s a balance of the risks and the purposes to which it is going to be put, and how you can minimize the risks and operate in a way which does not lead you to conclude that you must do everything yourself.”

He added: “If the supply chain bifurcates, it will be painful. It may still happen, but we hope there will be trust between the two sides and it will be possible for cooperation to continue.

“It does require a significant degree of trust and a willingness to want to work together, rather than to have a one up, one down outcome.

“And I’m not sure that’s the way things are going now.”