Najib Razak is first Malaysian ex-PM to be convicted 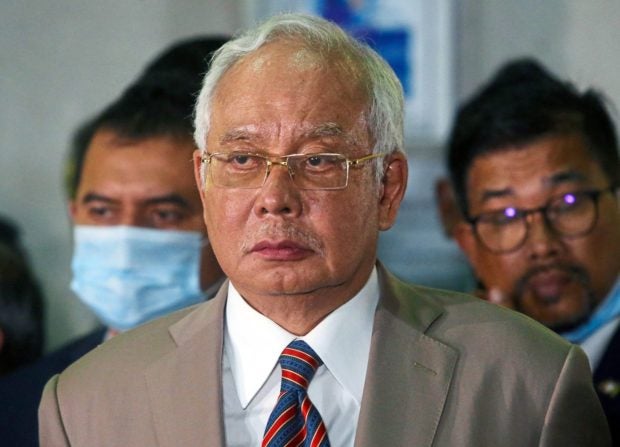 KUALA LUMPUR — Datuk Seri Najib Razak has become the first former premier in Malaysia’s history to be convicted by the court after he was found guilty of seven charges relating to the misappropriation of RM42 million ($10 million) in SRC International Sdn Bhd funds.

Justice Mohd Nazlan Mohd Ghazali ruled the defense had failed to raise reasonable doubt on the charges leveled against him.

“I therefore find the accused guilty and convict the accused on all seven charges,” he said here yesterday.

Justice Nazlan began reading his judgment just after 10am and spoke about the establishment of SRC International, a subsidiary of 1MDB.

He spoke about the defense’s contention that the accused believed the money in his account came from an Arab donation.

“In my view, even at this juncture, when the accused was told of the impending (Arab) donation from (fugitive businessman) Low Taek Jho (or known as Jho Low), the accused should have taken steps to verify and adduce proof of the information.

“There were no details about the donations or whether it would come with conditions.

He said Najib could have “picked up his mobile” and communicated especially with his foreign affairs minister or the Saudi ambassador.

“Instead the accused, as the prime minister, accepted a simple confirmation from Jho Low,” he said.

On the issue of letters received by Najib, which claimed that he received the donation from King Abdullah, Justice Nazlan said the writer – Prince Saud Abdulaziz – did not mention that he wrote on behalf of the King.

The court previously heard that the Malaysian Anti-Corruption Commission (MACC) made a trip to Riyadh in November 2015 to obtain a statement from Prince Saud regarding the four letters that were said to be signed by him, claiming that a RM2.6 billion donation was made to Najib.

Justice Nazlan said the letter mentioned a large sum of money yet the accused did not make any enquiries about the money to satisfy himself.

“The writer said he did not expect anything in return, which is of suspicious nature, yet the accused, an intelligent person and a prime minister, did not probe further,” he said.

On the defense’s claim that Najib’s signature was forged in some documents, Justice Nazlan said, “The question is, who has the audacity to forge his signature?”

It took two and a half hours for Justice Nazlan to read his decision.

After the guilty verdict was delivered, Najib’s lead counsel Tan Sri Muhammad Shafee Abdullah tried to postpone the sentencing to next Monday on the grounds that he needed more time to come up with the best mitigation for his client.

However, this was dismissed by the court after hearing lengthy submissions from both sides on the matter.

The court proceeded with the mitigation of Najib where Shafee described his client’s background as a politician and member of the Cabinet.

He said Najib was the youngest Mentri Besar of Pahang; he was 29 when he was sworn in.

“He is the Pekan MP and is currently an adviser to Barisan Nasional. He doesn’t even have many traffic summonses or other offenses,” Shafee said.

It was a given fact, he said, that Najib cooperated with the police and the MACC during investigations into 1MDB.

“In 2015 itself, during his tenure as PM and finance minister when these matters were investigated, he initiated the establishment of the Public Accounts Committee (PAC) over the same matter – 1MDB, SRC,” Shafee added.

He said Najib owed a fiduciary and moral duty and the conviction showed he failed in this respect.

The court’s sentence should serve as a precedent to all holders of the highest office in the land that no one was above the law, he added.

In such corruption cases, the ad hoc prosecutor said the punishment should not only fit the crime but also act as a deterrent.

Sithambaram added that any leniency shown to the accused would be “misplaced sympathy”.

According to Sithambaram, the 1MDB-linked case had tarnished the country’s image with kleptocracy and he said the people of Malaysia did not deserve that.

After the prosecution submitted, Shafee informed the court that his client would like to address the court.

Najib then stood up from the dock and maintained his innocence by repeating an oath:

After a short break, Justice Nazlan sentenced Najib to 12 years’ jail and RM210mil fine for one court of power abuse.

For three counts of criminal breach of trust, Najib was sentenced to 10 years’ jail for each of the charges.

For three counts of money laundering, another 10 years’ jail each.

The court ordered for the jail time to run concurrently.

Shafee applied for a stay of execution on both jail time and fine, which was allowed by the court.

Najib’s bail, originally set at RM1mil, was increased by another RM1mil in two sureties to be paid today.

Najib was also ordered to report to the nearest police station twice a month.

Read Next
Davao requires PCR test on arrival at airport; City gov’t to shoulder cost of testing
EDITORS' PICK
Metro Manila to remain under COVID Alert Level 2 until December 15
IATF tightens border control, suspends entry of fully vaxxed nationals from ‘green’ countries
Villar Group gears up for AllValue Shopping Party on Dec. 3; around P 1-million promos and discounts up for grabs
Duterte open to making jabs mandatory; Cabinet mulls ‘pressuring’ the unvaccinated
Legarda: Ending Violence Against Women, a cause for all
A delightful blessing!
MOST READ
Quiboloy warns of ‘much worse than Omicron virus’ if his ‘persecution’ is not stopped
Omicron poses ‘very high’ global risk, countries must prepare–WHO
Marcoleta defends pol ads on ABS-CBN
Bongbong Marcos’ conviction in tax case not a crime involving moral turpitude — lawyer
Don't miss out on the latest news and information.