BAGUIO CITY — The city government was tasked by the City Council on Monday to ascertain the proprietary rights over portions of Burnham Park, which remain under the country’s very first land title, now that its rehabilitation fund has been pulled out due to the coronavirus pandemic. 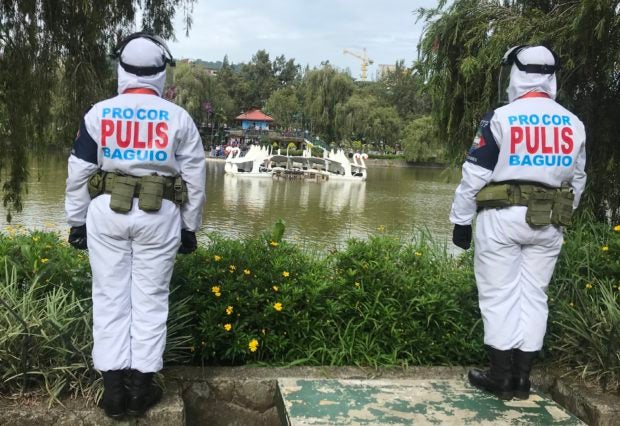 LIVING HISTORY. Baguio police officers geared up in their PPE (personal protective equipment) watched over Burnham Lake during a recent flag raising ceremony held there. Rehabilitation work on the iconic Burnham Park had been delayed by the pandemic. VINCENT CABREZA

The P480 million allocated by the Department of Tourism last year for improving the Burnham Lake and other sections of the century-old park had been repurposed for national health programs aimed at containing the spread of the disease, said Councilor Mylene Yaranon. An architect, she oversaw the drafting of a master plan for Burnham Park as part of Baguio’s redevelopment program.

The plan was transmitted again to the DOT for future funding considerations last week, she informed the council during its Monday regular session.

The whole program could actually require P2 billion, Yaranon said when quizzed about the plans for other sections of the park.

The delay should allow the government to review the metes and bounds of the park, said Councilor Isabelo Cosalan Jr.

Baguio is the location of Original Certificate of Title No. 1, which still covers the Athletic Bowl, the site of the city’s old library, the skating rink, and the periphery across the childrens park, he said.

The city’s most visited park was named after the late Chicago architect Daniel Burnham, who designed Baguio for the American colonial government at the beginning of the 20th century.

Described as the “lungs” of downtown Baguio, Burnham Park was placed under the custody of the Philippine Tourism Authority, the predecessor of today’s Tourism Infrastructure and Enterprise Zone Authority (TIEZA), during Martial Law.

The city regained custody and administrative control over the historic park through former President Gloria Macapagal-Arroyo during the Baguio Centennial in 2009.

The draft masterplan, which the council endorsed in 2019, opts for a low-density architectural design, heeding Burnham’s original concept for Baguio, Yaranon said. The plan was developed by Baguio’s engineering and architecture community.

The Council also endorsed a congressional measure filed by Baguio Rep. Marquez Go which would designate Burnham Park as a heritage site.