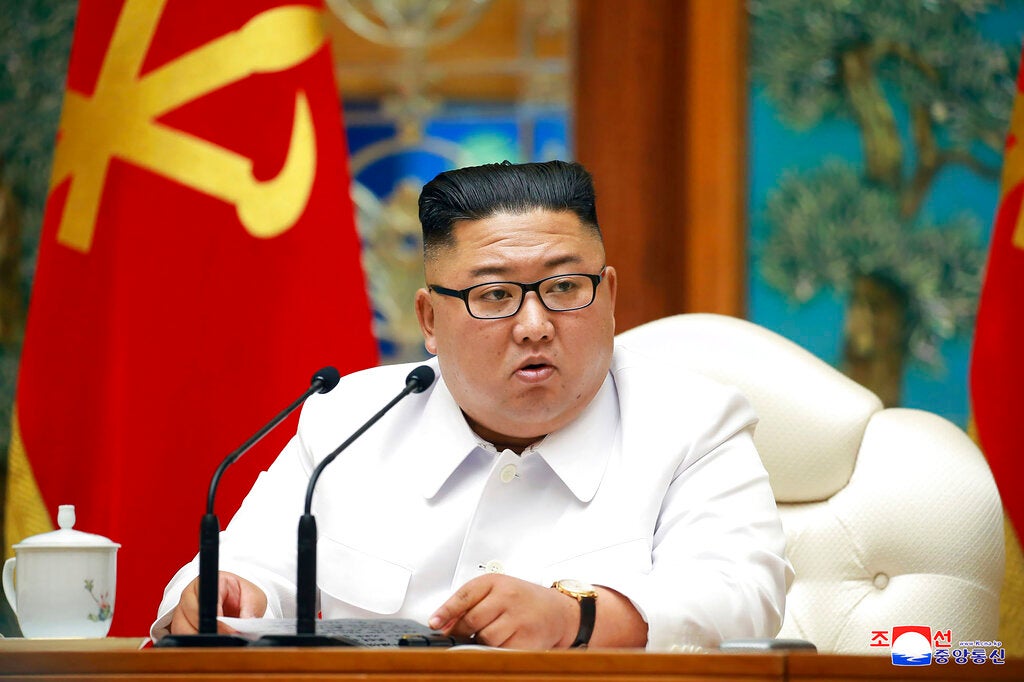 In this photo provided by the North Korean government, North Korean leader Kim Jong Un attends an emergency Politburo meeting in Pyongyang, North Korea Saturday, July 25, 2020. Independent journalists were not given access to cover the event depicted in this image distributed by the North Korean government. The content of this image is as provided and cannot be independently verified. Korean language watermark on image as provided by source reads: “KCNA” which is the abbreviation for Korean Central News Agency. (Korean Central News Agency/Korea News Service via AP)

North Korean leader Kim Jong Un said that Pyongyang’s nuclear weapons guarantee its safety, state media reported Tuesday, signaling once again that it will not give up its arsenal.

Kim was addressing a conference of veterans on the 67th anniversary of the 1953 armistice that ended Korean War hostilities, the official Korean Central News Agency said.

Up to three million Koreans died in the three-year conflict, in which the armistice has never been replaced with a peace treaty, leaving North and South technically still at war.

“Thanks to our reliable and effective self-defensive nuclear deterrent, there will no longer be such word as war on this land,” Kim was quoted as saying by the KCNA.

“Our national security and future will be firmly guaranteed forever,” he added.

Pyongyang insists that it needs its nuclear arsenal to deter against a possible US invasion.

It has spent decades developing it and is internationally isolated as a result, subject to multiple United Nations Security Council sanctions over its banned weapons programs.

Inter-Korean relations have been in deep freeze for months, following the collapse of a summit in Hanoi between Kim and US President Donald Trump last year.

That nuclear negotiation foundered on what the North would be willing to give up in exchange for a loosening of sanctions.

Kim declared in December an end to moratoriums on nuclear and ballistic missile tests, and Pyongyang has repeatedly said it has no intention to continue talks unless Washington drops what it describes as “hostile” policies towards the North.