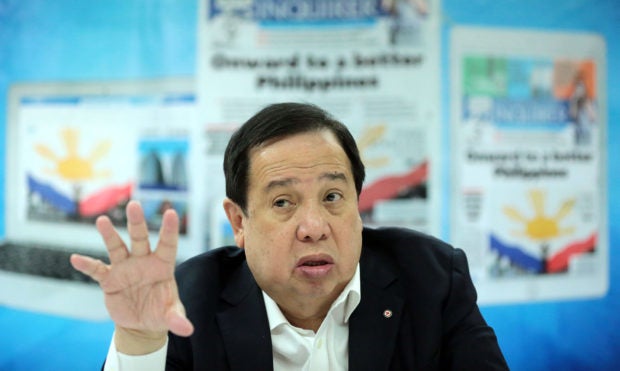 Speaking with reporters in a virtual interview on Tuesday, Gordon rallied behind his colleague.

(He already blasted Senator Drilon early on. Maybe he really harbors a huge grudge, but just the same he shouldn’t have made public his anger against a person, more so to a senator.)

“Mali o hindi [Whether it’s wrong or not], that is his position and that should be respected the way we respect all the pronouncements of the President,” he added.

Within the first five minutes of his penultimate State of the Nation Address (Sona) on Monday, Duterte blasted Drilon over his “arrogant” remarks on oligarchs and accused the senator of defending the Lopezes.

Duterte once again hit Drilon at the latter part of the speech, this time calling the senator a “hypocrite.”

But Gordon said the President should not have singled out Drilon, who he said “shares the position of a lot of people.”

(He has been saying a lot of things that shouldn’t have been said… But we do not interfere. Democratic space is what its called.)

“Pero hindi dapat i-single out ang isang tao who shares the position of a lot of people,” he added.

(But it’s not right to single out someone.)

Drilon has been vocal about his opposition to the rejection of ABS-CBN franchise bid, citing the loss of jobs to some of the network’s 11,000 employees.

In a statement shortly after Duterte’s Sona, Drilon refuted the President’s claim that the former is defending the Lopezes, the owners of the shuttered media giant ABS-CBN.

The Senate minority leader had also clarified that he never mentioned Duterte’s children, who currently hold public offices, amid discussions on dismantling oligarchy in the country.

On the other hand, Senator Imee Marcos attributed Duterte’s remarks against Drilon to his “authentic” nature.

(Of course we felt a bit nervous when the President started, I was a bit nervous. Senator Frank was really the appetizer and the dessert.)

(Besides that, we loved the President for being authentic, he’s a real person. He’ll say what he feels for you.)