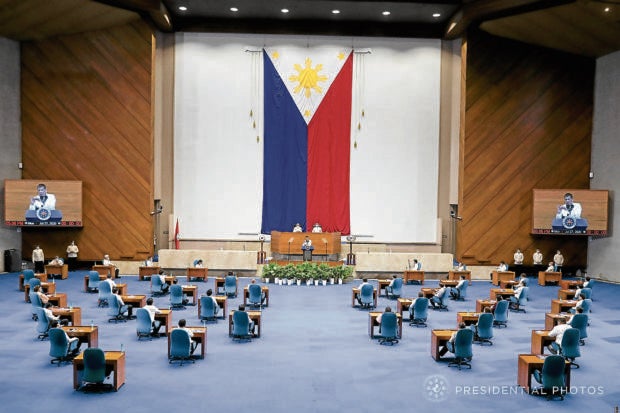 LIMITED LIVE AUDIENCE To avoid a large gathering, only selected members of the Senate and the House attend a joint session of Congress to hear President Duterte’s State of the Nation Address. —MALACAÑANG PHOTO

MANILA, Philippines — Invoking public anger, President Rodrigo Duterte on Monday trained his sights on the two dominant telecommunication companies in the country and warned them to shape up by December or face expropriation.

In his fifth address to a joint session of Congress, Duterte took a shot at big business once more and said he would take drastic steps against PLDT Smart and Globe Telecom if they would not improve their services.

In a statement issued after the President’s speech, Globe said it remained an active partner of the government during the coronavirus crisis. It said it had extended support to public and private hospitals, quarantines and health workers, and it was working with the DepEd to assist the education sector through low-cost data plans and devices, as well as teacher training, online platforms and mental health support.

Globe also pointed to a combined P1.3 billion in assistance it provided to its customers during the pandemic.

“We heed the call of the President to improve telco services,” Globe said.

There was no immediate statement from PLDT on Monday.

Duterte issued the threat as the third carrier in the industry, China-backed DITO Telecommunity, prepares for its commercial rollout.

It also comes as businesses, schools and government offices increasingly turn to digital operation amid movement restrictions due to the new coronavirus pandemic.

The health crisis has forced a shift to remote education, but the slowness, costliness and unavailability of internet service in far-flung parts of the country make the claim of the Department of Education (DepEd) of readiness for the new tack doubtful.

“I call on our communication companies to improve their services lest we be forced to take drastic steps to address the less than ideal service that the public is getting from you,” Duterte said in his State of the Nation Address at the opening of the second regular session of the 18th Congress.

He noted that the government is pictured to be weak because it cannot carry out its mandate.

Companies providing public services must look for the funds to improve and not make Filipinos wait years for proper service, he said.

“If it’s a question of added capitalization or infusion of money, go and look for it. Look for it because if you are not ready to improve, I might just as well close all of you and we revert back to the line telephone and I would take it, expropriate it to the government,” he said.

He said he himself had experienced difficulties in getting in touch with people by phone and mimicked the message that a caller receives when the subscriber he is trying to reach is unavailable.

“If this is the case, give it to us. We are a republic, sovereign country. Bear that in mind because the patience of the Filipino people is reaching its limit. And I will be the one to articulate the anger of the Filipino people and you might not want what I intend to do with you. Kindly improve your services before December,” he said, adding in jest that he wanted to call Jesus Christ in Bethlehem.

“Better have that line cleared,” he said.

If they cannot improve their service, he said, they should inform him and he would spend the next two years improving telecommunications in the country “without you.”

“I will talk to Congress and find a way how to do it,” he added.

It is currently putting up towers and operational cell sites.

PLDT Smart is headed by Manny V. Pangilinan while Globe is associated with the Ayalas, businessmen whose water concession contracts had also drawn the President’s ire.

But Duterte has apologized to Pangilinan and the Ayalas and thanked them for helping out during the coronavirus crisis.

Last week, Globe Telecom said it needed the national government’s help in building infrastructure to improve its service. It said it needed to build more cell towers and lay down fiber cable but was encountering difficulty with getting permits from local governments and opposition from hostile homeowners’ associations.

The Department of Information and Communications Technology promised to look into the permitting process.

—With a report from Miguel R. Camus