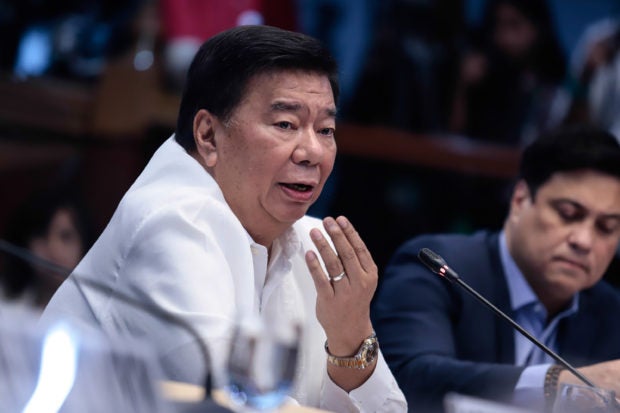 MANILA, Philippines — President Rodrigo Duterte on Monday stepped up his attack on ABS-CBN and went on the offensive against Senate Minority Leader Franklin Drilon for saying banning political dynasties was needed to bring down the oligarchs in the country.

Drilon made the statement after Duterte boasted two weeks ago that he dismantled the oligarchy without declaring martial law, following the House of Representative’s denial of the broadcast network’s application for the renewal of its franchise.

ABS-CBN had been the subject of the President’s verbal attacks prior to its closure by the National Telecommunications Commission in May.

In the first few and last few minutes of his penultimate address to a joint session of Congress, Duterte took potshots at Drilon, saying the senator was one of those taking advantage of the government’s preoccupation with COVID-19.

According to Duterte, Drilon had defended the Lopezes, who own ABS-CBN, and had said they were not oligarchs, and “arrogantly” mentioned that oligarchs need not be rich.

“Then he linked the anti-dynasty system with oligarchy and the topic was my daughter and son,” Duterte said, referring to Davao City Mayor Sara Duterte and Vice Mayor Sebastian Duterte.

Davao City Rep. Paolo Duterte is also a son of the President.

The President called Drilon a “hypocrite,” saying that since the senator was the one in the legislature, he should pass the antidynasty law.

“You’re the one in Congress, you should be the first to do it. But you know, to take it against me for protecting my country, is something which I really resent,” he said.

The oligarchs in the Philippines are the ones who control the country’s water and electricity, the President said.

“There is no more oligarchy here, except that,” he said.

He linked Drilon to the water concession deal of Manila Water with the government, which he earlier criticized and ordered renegotiated for supposedly containing provisions detrimental to the people.

He said he suspected that Drilon was involved in drawing up the water concession agreement when he was with the ACCRA law firm.

Responding to the President’s attack, Drilon said he defended press freedom, and not the Lopezes, when he spoke out against ABS-CBN’s closure.

Drilon said a free press was necessary for democracy to thrive. Journalists must be able to carry out their duties without fear, he said.

“In the face of a pandemic, we need more access to information. I aired my support for the renewal of the franchise of ABS-CBN because undeniably, the network complements other stations in providing timely and accurate [reporting] even in the farthest locality unreachable to others, even to the government,” Drilon said in a statement.

“I was defending the 11,000 people and their families who would lose jobs amid the pandemic, not the Lopezes,” he added.

In a radio interview, Drilon said he had filed anti-dynasty bills even beforeDuterte became President.

He also said he had not been involved in the preparation of water concession contracts with the government.

“I have not seen even the shadow of that contract,” he said.

Duterte ranted again against ABS-CBN, saying its owners were part of the elite who used their wealth to go up against political figures.

He painted himself as a victim of the network.

“Great wealth enables economic elites and corporations to influence public policy to their advantage. [The] media is a powerful tool in the hands of oligarchs like the Lopezes who used their media outlets in their battles with political figures. I am a casualty of the Lopezes during the 2016 election,” he said.

Earlier, Duterte upbraided the Lopezes for failing to air his political advertisements during the 2016 presidential election.

His allies had also taken the network to task for airing an anti-Duterte advertisement.

The top official of the network apologized for these earlier this year, an apology the President said he accepted.