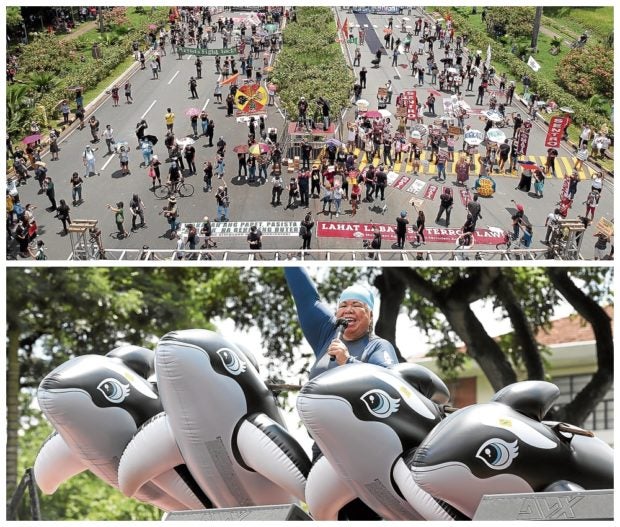 ON THE GROUND President Duterte’s fifth State of the Nation Address, delivered on Monday amid a global health crisis, is greeted with protests as various groups converge on the University of the Philippines Diliman campus in Quezon City. A protest highlight is the appearance of actress and political activist Mae Paner, also known as Juana Change (below), dressed as presidential spokesperson Harry Roque in swimwear posing with a pod of inflatable dolphins. —NIÑO JESUS ORBETA

MANILA, Philippines — As protest actions greeted President Rodrigo Duterte’s fifth State of the Nation Address (Sona) on Monday, the police arrested five jeepney drivers on their way to the main rally in Quezon City and entered Quiapo Church in Manila to confiscate placards and streamers from a group of activists attending Mass.

Some 2,000 people representing militant and cause-oriented groups converged on the University of the Philippines Diliman campus, the only area where they were permitted by the Philippine National Police, which earlier threatened to arrest those who would defy the restriction.

The transport group Piston condemned the National Capital Region Police Office for the “illegal arrest” of five members, who were in a jeepney on their way to the UP rally when accosted by officers who blocked their vehicle around 8:15 a.m. in front of the National Housing Authority Building on Elliptical Road.

“The drivers did not even violate anything. The police could not tell them [on the spot] exactly why they were arrested or what charges would be filed against them. This is a clear case of illegal arrest,” Piston president Mody Floranda told the Inquirer in a phone interview.

Floranda said the drivers could not possibly be arrested for violating health protocols or quarantine regulations, since they were all wearing protective masks and observing proper distancing inside the jeepney.

“We strongly condemn this illegal arrest … They have not received any aid from the government for five months, and it is their right to let the administration know about their condition,” he said.

Floranda said the police had admitted that the drivers could be freed “since they did not violate anything.”

“They were just harassed to prevent them from participating in the UP rally,” he added.

In Manila, two police officers in fatigues disrupted the Mass right after the homily and grabbed a shopping bag from Tristan Bringas, one of the members of Akbayan Citizen’s Action Party (Acap) who were attending “Misa Para sa Kapayapaan,’’ a service being led by Manila Auxillary Bishop Broderick Pabillo.

Bringas initially held on to the bag containing protest materials but one of the officers grabbed him by the wrist and said: “Di kayo sumusunod (you are not following the rules).”

Recounting the incident later in an Inquirer interview, Acap chair Macris Cabreros said it was a “clear act of abuse that only dictatorial regimes do … [and it’s] alarming that this happened during Mass inside a church.” 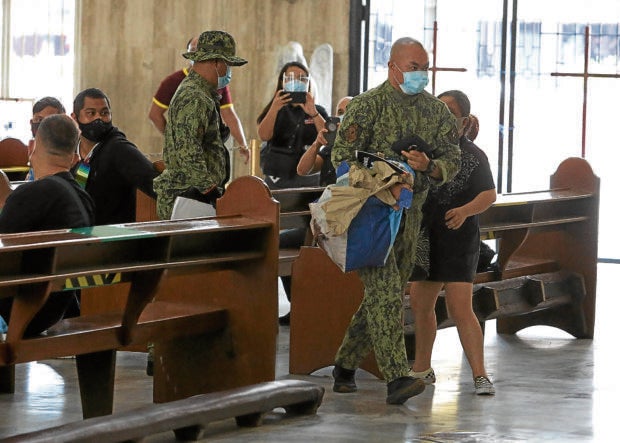 In a TV interview, Manila Police Director Rolando Miranda, who was also present at the Mass, defended his men’s actions: “The thing I’m curious about is why they brought protest materials into the church. Why didn’t they just leave them in the car? Maybe the police saw that and wanted to preserve the sanctity of the Mass.”

Miranda said he would still have the matter investigated “so that corrective measures and sanctions could be implemented.”

At the UP Diliman rally, ABS-CBN broadcast journalist Ces Drilon joined speakers in assailing the Duterte administration over the recent House rejection of the network’s application for a new franchise, calling it an attack on press freedom.

The crippling of ABS-CBN operations leaves a chilling effect on other media networks, a warning to media outlets critical of the administration’s policies that they would “would be next,” she added.

Aside from the five Piston members, there were no other arrests reported in connection with Sona protest actions.

As observed by Quezon City police chief Ronnie Montejo, “the people who gathered in UP Diliman complied with the agreement to finish by noon, without any commotion. I hope it’s always like this so there won’t be any trouble.’’ INQ