Duterte supporters step up drive for Cha-cha ahead of SONA 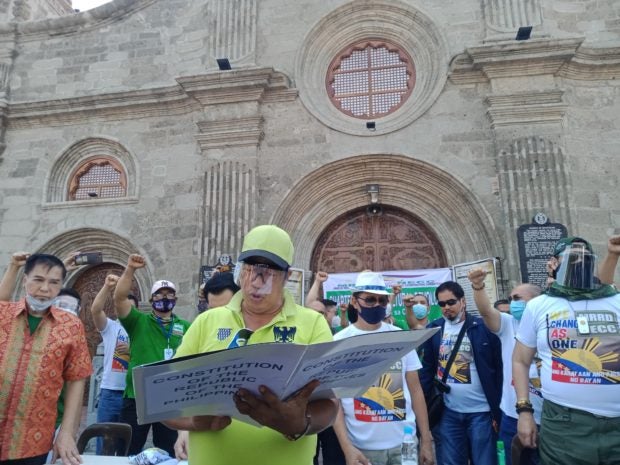 Members of the Mayor Rodrigo Roa Duterte National Executive Coordinating Council gather in front of the Barasoain Church in the City of Malolos to dramatize their call for charter change to give way to the federal form government. Photo by Carmela Reyes-Estrope

CITY OF MALOLOS — Supporters of President Duterte intensified their campaign for charter change ahead of the State of the Nation Address on Monday.

Members of the Mayor Rodrigo Roa Duterte National Executive Coordinating Council on Saturday held a motorcade from Luneta Park to the historic Barasoain Church here to dramatize their call for charter change to give way to the federal form of government.

The group said their campaign, called “Charter Change-Cultural Revolution,” would help railroad the reform and explain to people the benefits it would bring.

They also held a ceremonial folding of the 1987 Constitution and the opening of pages of the proposed new constitution under federal presidential parliament where the country’s first set of laws was crafted 131 years ago.

Bobby Brilliante, the group’s national deputy spokesperson, said they wanted to remind the President about his campaign promise of federalism.

“The President has successfully launched the war against drugs, corruption, poverty, but federalism has yet to be achieved,” Brilliante said during the event.