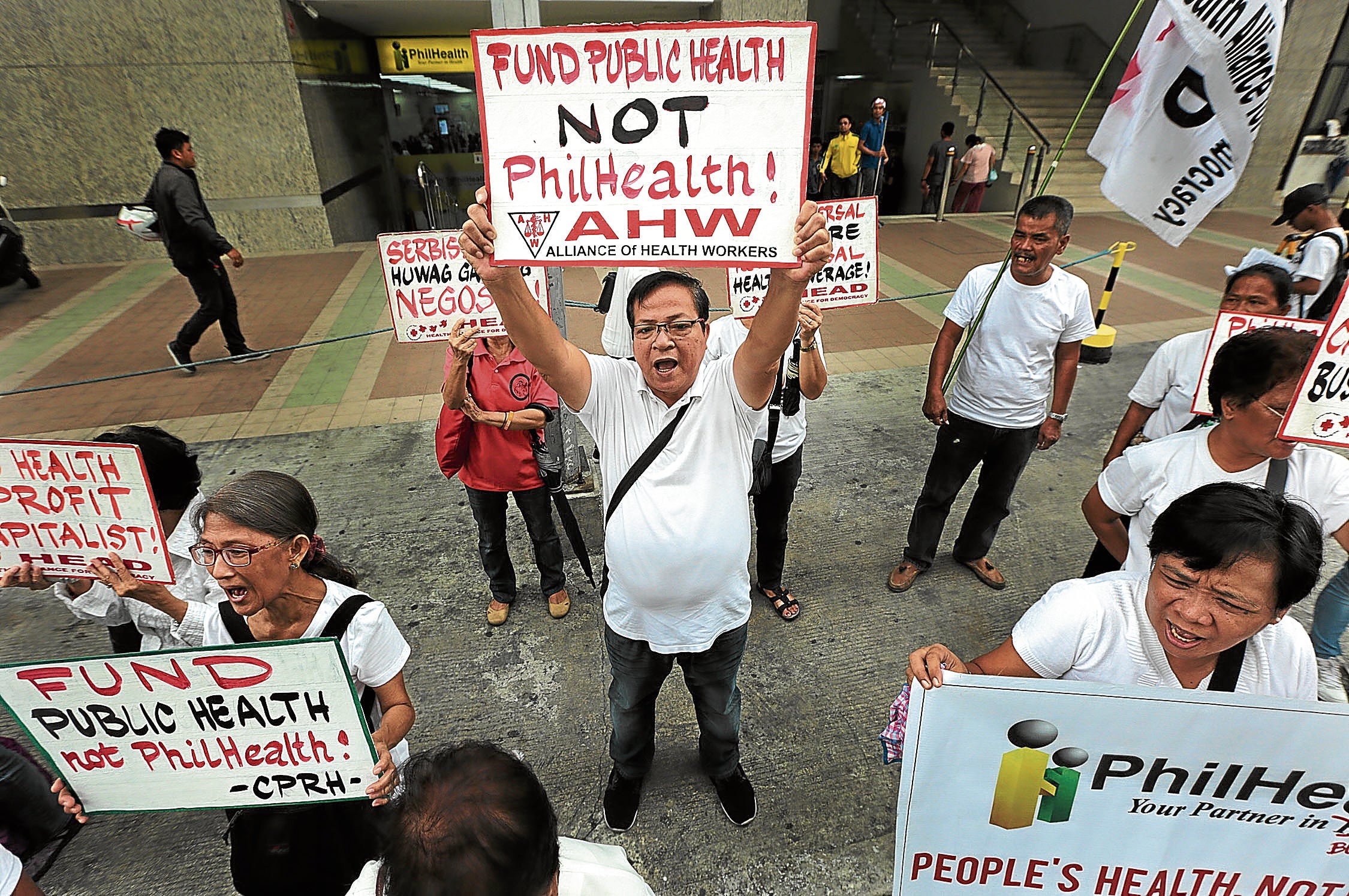 INVESTIGATE AND PROSECUTE Protest actions decrying irregularities in PhilHealth, like in this photo taken on June 19, 2019, in the aftermath of the “ghost dialysis’’ scam reported by the Inquirer, may be expected following fresh allegations of corruption in the state-run health insurance corporation. —INQUIRER FILE PHOTO

MANILA, Philippines — Resident auditors of Philippine Health Insurance Corp. (PhilHealth) have linked one of its senior executives and a “former acting president and CEO” to the questionable release of “cash bonanza” from a P30 billion financial package for hospitals treating COVID-19 patients.

In an internal audit report obtained by the Inquirer, the state auditors also took issue with the P100 million “advance payment” to the Philippine Red Cross (PRC), which used the funds for launching a massive testing program for the new coronavirus disease.

The audit revealed that PhilHealth Senior Vice President Renato Limsiaco Jr., who heads the Fund Management Sector, may have had a hand in granting P9.6 million to Catarman Doctors Hospital, a private hospital in Catarman, Northern Samar, on April 15.

The amount, along with the funds given to the Philippine Red Cross, were drawn from PhilHealth’s Interim Reimbursement Mechanism (IRM), a P30 billion financial package that the government-owned insurance corporation has allotted for hospitals attending to people infected with COVID-19.

“The highly publicized distribution of billions (of pesos) brought an influx of applications for availment (of IRM),” the PhilHealth auditors said in their report.

“So charitable was PhilHealth that it even extended its cash-slapping bonanza to unaccredited (hospitals) and even incorporated this fact in the IRM circular,” they said.

“The IRM was distributed to (hospitals) even to those (which) had pending cases, no accreditation and worse, no COVID-19 cases,” they added.

A source, who asked not to be named for personal safety reasons, told the Inquirer that a copy of the report was submitted in early May to PhilHealth President and CEO Ricardo Morales and Health Secretary Francisco Duque III, who chairs the PhilHealth board.

The state insurer’s in-house auditors noted that Catarman Doctors Hospital was not accredited by PhilHealth and that it had been slapped with an administrative case apparently for flouting PhilHealth regulations.

“[The hospital is] one of the first recipients of IRM worth P9,617,412,” the PhilHealth auditors said. “This hospital is said to be the favorite of SVP Limsiaco when he was the regional vice president of Region VIII.”

“Is it true that Mr. Limsiaco or his relatives have a pecuniary interest in (Catarman Doctors Hospital) so much so in order to oversee its financial operations, he left for Region VIII before the (lockdown order) was declared, abandoning his post in the central office?” they asked.

Sen. Panfilo Lacson, who has been exposing questionable financial transactions in the government, confirmed that Limsiaco was one of the main people behind the latest corruption scandal in PhilHealth.

He and Senate President Vicente Sotto III are expected to file a joint resolution on Monday calling on the Senate committee of the whole to investigate several irregularities in PhilHealth, including a proposed P2.1 billion information technology project that the Commission of Audit had flagged as overpriced. “We will [invite] and ask (Limsiaco) questions in our hearing,” Lacson told the Inquirer.

Lacson earlier disclosed that up to P400 million in IRM funds had been channeled to five hospitals in the Bicol region and Eastern Visayas, including some that had only one COVID-19 patient.

Besides Catarman Doctors Hospital, the PhilHealth internal auditors noted that St. Benedict Hospital in Davao del Sur got P11.7 million on May 5 from the IRM fund.

“This hospital is said to be the favorite of a former acting president and CEO,” they said.

The report did not mention if the erstwhile senior official being referred to was Dr. Roy Ferrer, a native of Davao City who stepped down as acting PhilHealth president and

CEO last year after the Inquirer published a series of investigative reports on the “ghost” dialysis patients scam and other fraudulent transactions in PhilHealth.

Interestingly, President Rodrigo Duterte recently appointed Ferrer assistant secretary of the Department of Health (DOH), in charge of DOH operations in the Visayas and Mindanao. The DOH has administrative supervision over the state health insurer.

In calling out the implementation of IRM, the PhilHealth auditors said the award of P100 million in “mobilization” funds to the Philippine Red Cross (PRC) could have violated the universal health care (UHC) law and the Red Cross charter.

“[PRC’s] charter only allows them to recover cost for services rendered, which they have not yet rendered in this case,” the government auditors said.

“However, this can be overlooked due to the very gallant act of [PRC] of taking cognizance of the PCR testing due to the swift accreditation of their laboratories when even some DOH hospitals have not been accredited until now,” they noted.

Under its guidelines, PhilHealth released amounts to hospitals equivalent to three months in “advance payments” based on their monthly collections from the state-run insurance firm in 2019.

The state auditors said this made the basis of the funds given to PRC “unclear” as it had no prior “paid claims” from PhilHealth.

Apparently swamped by requests for IRM assistance from the provinces, PhilHealth issued the “standard operating procedures” for the financial grant only on April 22, three weeks after it started distributing money to hospitals.

“By mid-May 2020, the cash bonanza suddenly dwindled when issues in the false financial statements and the realization that it now had limited funds dawned on PhilHealth,” the government auditors said.

This also prompted the state insurer to “scale down” the approval of IRM applications by the end of May and limit the release of funds to declared COVID-19 referral hospitals, testing centers and areas with high number of cases in June, they noted.“However, PhilHealth still has no guidelines for a reconciliation program/system or mechanism to recover millions (of pesos) advanced to (hospitals),” the internal auditors said.

Sen. Richard Gordon, the PRC chair, flatly denied that the agreement the humanitarian organization had entered into with PhilHealth contravened its own charter.

Gordon, also chair of the Senate blue ribbon committee, said the state insurer already owed PRC P137 million as PhilHealth had not been reimbursing it for the cost of the COVID-19 tests that it had conducted. The number of tests is now about 300,000.

“Why should it be a violation of our charter? We are an independent organization.

Our charter allows us to recover our expenses and make a profit,” Gordon told the Inquirer.

“Is it wrong for PRC to make a little profit so we can recover our expenses and pay our people well as well?” he said.