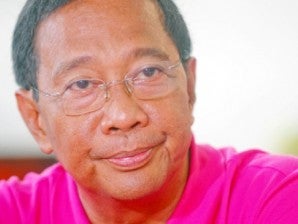 “Unless we see a serious breach in the Senate impeachment trial proceedings, our common task is to lend to it our attentive and respectful silence.”

This was stressed on Thursday by Vice President Jejomar Binay, who noted that “it’s in our highest national interest that whatever the outcome of this impeachment trial, it should succeed as a fair and just constitutional process.”

Speaking at a Foreign Correspondents Association of the Philippines (Focap) forum at a Makati City hotel, Binay said that “that would define our maturity as a democracy and our right and fitness to forge ahead as an independent and sovereign state.”

The Vice President also emphasized that “for democracy to work, we need democrats who will make its institutions work.”

“This thesis is being tested in the Senate, where the impeachment trial of Supreme Court Chief Justice Renato Corona is taking place,” he said.

Binay noted that “this is the second time in 12 years that we are witnessing such a process.”

“In 2000, the first Senate impeachment trial was held against a sitting president, Joseph Estrada. That trial, however, was not completed. The prosecution had wanted the impeachment court to admit certain evidence volunteered by outside parties without a court subpoena, and intended to prove a charge which, in the judgment of the majority of the senator-judges, was not in the original articles of impeachment. When the impeachment court refused to admit the evidence, the prosecutors walked out, and the issue was finally decided against Estrada by the fiercely anti-Estrada crowd at Edsa,” he said.

According to Binay, “many of us were euphoric about that decision.”

“But it took the rest of the Gloria Macapagal-Arroyo presidency to make everyone realize that the constitutional shortcut was a ruinous mistake. It was wrong to have allowed enraged public opinion rather than due process and the rule of law to take control of the constitutional process, and to have allowed the impeachment trial to be aborted because of pressure from the streets,” he said. Jerry E. Esplanada