MANILA, Philippines — A proposed P2.1-billion information technology (IT) project of Philippine Health Insurance Corp. (PhilHealth), supposedly designed to stem fraud and scams devised by some corrupt personnel, was itself fraught with irregularities, government auditors have found.

One component of the project flagged as “anomalous” by the Commission on Audit (COA) and PhilHealth’s resident auditors in three separate reports was the planned procurement of various equipment worth P734 million, which was not contained in the original budget proposal submitted by the state insurer.

In their report in May, one group of COA auditors discovered that the budget for five “ICT (information and communications technology) resources”—computers, scanners and other items—was overpriced by P98 million.

The internal auditors, who said that a “syndicate” was operating in the state-run corporation, found that some of the equipment and computer programs PhilHealth was planning to buy were highly overpriced.

An Adobe software, which cost P168,000 per unit, was listed as P21 million each in the proposed budget submitted by PhilHealth’s IT sector, a whopping 12,400-percent increase from its original price, the auditors said in their report also in May.

The price of items under “application servers and licenses” was increased to P40 million from its initial budget of P25 million, the internal auditors said.

Sources familiar with the reports said the allegedly irregular IT project was one of the reasons lawyer Thorrsson Montes Keith quit his post as PhilHealth antifraud officer. The project sparked a “shouting match” among PhilHealth executives during an online meeting on July 22, a day before Keith submitted his resignation letter.

In his letter to PhilHealth president and CEO Ricardo Morales, Keith cited “widespread corruption” as one of the reasons he was leaving PhilHealth. He did not elaborate.

The latest corruption scandal came a year after the Inquirer published a series of investigative reports about how the state-owned insurance company lost P154 billion through various forms of fraud, such as reimbursements for “ghost dialysis,” overpayments, false claims and “upcasing” of common ailments.

In his State of the Nation Address in 2019, President Duterte said he was “grossly disappointed” that the government had been “conned of millions of pesos, which could be used to treat illnesses and possibly save the lives of many.”

“The recent uncovering of the massive fraud perpetrated against the public health insurance system proves that corruption is pervasive,” said Mr. Duterte, who had promised to stop corruption in the first six months of his presidency.

He sacked top officials of PhilHealth and appointed Morales, a retired army general, to head the state insurer, describing him as “a man of integrity.” The President gave him “marching orders to prioritize ridding the agency of corruption.” 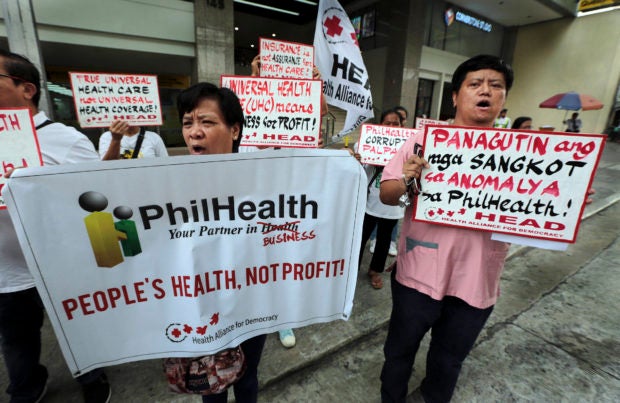 ANOTHER SCANDAL Health workers protesting fraudulent claims paid by the Philippine Health Insurance Corp. in this June 19, 2019, photo might again be outraged by a possible new scandal following the resignation of an antifraud officer at the state insurer who cited widespread corruption for quitting. (Photo by GRIG C. MONTEGRANDE / Philippine Daily Inquirer)

Change has not come

A year later, however, change has not yet come to PhilHealth, which is primarily tasked to provide health coverage for over 100 million Filipinos, a mission that has become more vital amid the COVID-19 pandemic.

Morales did not immediately respond to the Inquirer’s calls and text messages to seek his comment.

In one of the reports, the government auditors said many equipment that PhilHealth wanted to buy were not included in its Information Systems Strategic Plan (ISSP) for 2018 to 2020, which the Department of Information and Communications Technology (DICT) had already approved.

The audit started in February and covered PhilHealth’s planned expenses for its IT system as reflected in its corporate operating budget for this year.

The contents of the report were presented to officials of PhilHealth’s Information Technology Management Department, Physical Resource and Infrastructure Department and Comptrollership Department in a meeting at the end of the audit on May 6.

An Inquirer source, who asked not to be identified due to the sensitivity of the matter, said the reports were submitted to Morales and Health Secretary Francisco Duque III, chair of the PhilHealth board.

“The audit made resulted in the identified discrepancies and inconsistencies, which could be linked with the gaps and/or weaknesses in the systems, policies and procedures,” one of the reports read in part.

The government auditors said the ICT equipment were “important tools in the achievement of the corporation’s vision, mission and goals.”

“To safeguard the assets of the corporation, it is necessary that procurement of the ICT resources should be controlled and properly accounted for,” they stressed.

In their report, PhilHealth’s in-house auditors emphasized the importance of having an integrated IT system as it would serve as “the backbone of a sound health security program.”

“For several years now, PhilHealth’s membership, collection and claims database remain fragmented despite spending billions [of pesos] for IT hardware and software,” the PhilHealth auditors said.

“This situation explains why the syndicate can manipulate PhilHealth’s real financial status and several moneymaking schemes, in guise of public service, have been implemented of late,” they added.

It did not identify members of the “syndicate,” but a PhilHealth insider had told the Inquirer that a “mafia” allegedly composed of senior officials, had been lording it over the state insurer and “ensures that there’s no review of the rates and overpayments” and other “rackets” perpetrated by its members.

In an audit query memorandum dated Jan. 31, another group of COA auditors reported that the winning bidders for the P29-million “production database server” and “online services” of PhilHealth in 2016 had failed to comply with the requirements set by the state insurer.

“The agency requirements were found to be vague. [This] would give the supplier an option to deliver items other than what is required,” said the report signed by supervising auditor Reynaldo Darang.

The COA auditors noted that delivery of the equipment was delayed by 118 days and no certification was issued that PhilHealth personnel had received sufficient training in operating the system.

They said PhilHealth’s IT unit initially asked for P2.1 billion for the ISSP, but the board turned it down for “failure to provide specific details” of the new system. A correction of “typographical errors” later reduced the budget to P1.9 billion, the state auditors said.

“The budget remain unapproved by the board save for around P25 million, which was needed to renew a line subscription,” PhilHealth’s internal auditors said in their report. The report did not define “line subscription.”

“However, by March 15, 2020, the board was constrained to approve P328 million [for] IT supplemental budget otherwise, they were told ‘the entire PhilHealth system will collapse,’” they added.

In all, PhilHealth had released P352 million for IT services even before the entire proposal was approved by the board.

Last April, PhilHealth senior vice president and chief information officer Jovita Aragona moved for the procurement of P750 million worth of IT equipment.

A few weeks later, she again asked for the release of another P215 million.

However, PhilHealth’s resident auditors said members of the board demanded an internal audit report on the existing “software and hardware” before approving the proposal.

Aragona did not present the internal audit report, arguing that the equipment in her proposal were not covered by the review conducted by PhilHealth’s in-house auditors.