MANILA, Philippines — A police official in Zamboanga City was relieved from his post and subjected to an investigation for brutality after he knelt on the neck of an alleged quarantine violator à la George Floyd, the Black American whose death in police custody sparked hundreds of protests across the United States.

The Zamboanga Peninsula Regional Police Office identified the sacked policeman as Maj. Jivertson Pelovello, station commander of Zamboanga City Police Station 7, who was recorded on video pinning an unidentified man down the pavement by kneeling on his neck and then stepping on his stomach.

Cambay said it was unfortunate that the officer had to resort to such a restraint technique when the suspect appeared to be cooperative. But he also conceded that the video that went viral on Facebook starting on Thursday might have not captured the whole story. 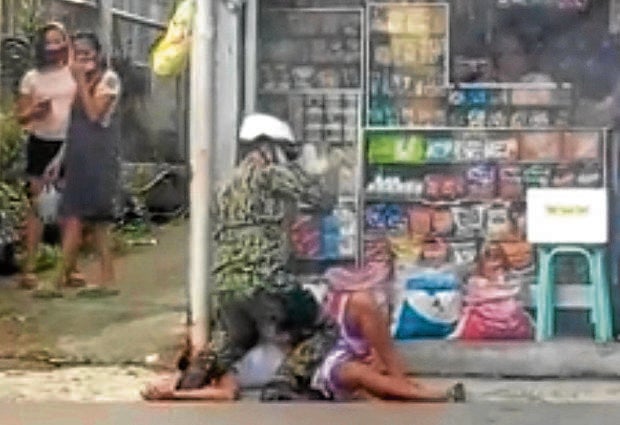 “His administrative relief is part of our procedure to give way to impartial investigation free of any influence by reason of office or position,” Cambay said in a statement.

“It is unfortunate that the viral video seems to suggest brutality or application of unreasonable force disproportionate to subdue a seemingly cooperative suspect,” he noted.

Cambay assured the public that most of the policemen in the Zamboanga Peninsula are professional and respect the human rights of suspects.

“The PNP organization never tolerates its police personnel who performed their duty beyond what is being laid down in the PNP operational procedure,” the police chief added.

The knee-on-neck technique has been banned by many police organizations around the world after Floyd died last May 25 when a Minneapolis policeman knelt on his neck during an arrest for allegedly using a counterfeit bill.