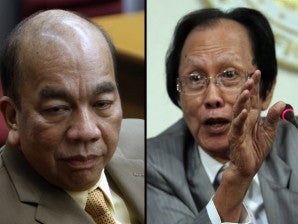 It must have felt like being in law school again for Representative Elpidio Barzaga during the impeachment trial of Chief Justice Renato Corona Thursday.

Barzaga, a prosecutor of the House of Representatives, engaged his former professor, retired Associate Justice Serafin Cuevas, in a heated exchange early in the trial, but only to be lectured on the rules of court in the process.

Cuevas, the lead defense counsel, appeared irritated when Barzaga raised an objection during his cross examination of witness Randy Rutaquio, head of the Register of Deeds of Taguig City.

Barzaga, a former student of Cuevas on remedial law at the Far Eastern University, objected to the speed with which the 83-year-old defense counsel was throwing questions at Rutaquio, himself a lawyer.

“What is your ground for objecting? What the law provides is state the objection only and do not make any explanation,” the mentor told his former student.

“My objection, your honor, is that before a question should be propounded, the witness should be first permitted to answer the previous question,” Barzaga said.

“That’s very basic, your honor, and I learned that from my remedial law professor, who happens to be no less than the defense counsel!” he added, triggering laughs from the people in the gallery.

Not to be outdone, Cuevas thundered back: “Maybe you were absent when I discussed that!”

Barzaga appeared to have gotten some measure of revenge when Enrile, the presiding officer, told Cuevas to “slice your questions minutely so that the witness will understand.”

Earlier in their verbal back-and-forth, Barzaga had to “reform” his questions at least three times, partly to “satisfy the curiosity of defense counsel,” he said.

“It is not my curiosity. That is what the law provides,” Cuevas responded.

Cuevas was then objecting to Barzaga’s direct examination of Rutaquio on the condominium certificates of title referring to the alleged ownership of condominium units of Corona and his wife.

The defense counsel questioned, for instance, the competence of Rutaquio to answer Barzaga’s queries on how a particular CTC “came into existence.”

Later in the trial, Senator Franklin Drilon appeared to rescue the prosecution once again when he questioned Rutaquio about the contents of a deed of sale of a property (Transfer Certificate of Title No. 2093-P).

Drilon threw a series of questions until he squeezed from Rutaquio the information Corona acted as an “attorney in fact” for his daughter for the sale dated Oct. 21, 2008.

Representative Niel Tupas Jr. also made a manifestation asking Cuevas not to “lecture” the prosecution during the trial.

“We observed, Mr. Senate President, that since yesterday [Wednesday] the distinguished lead counsel of the defense has not only been objecting to our questions … but also lecturing us,” he complained.

“We are just concerned that we might not be able to present all our evidence in a … fair, reasonable manner if … I would love to listen to the distinguished gentleman, but not inside this impeachment tribunal.”

Read Next
Gov’t warned against bidding out LTO contract
EDITORS' PICK
Nestlé Philippines’ ‘NESCAFÉ Plan’ bags Grand Anvil at PRSP 56th Anvil Awards
Smart reinforces superiority with best speed and mobile video experience in PH
Every Filipino home can now be a smart home with realme TechLife
New 3,045 COVID-19 cases push PH total active cases to 40,074
LTO’s P500-M deal for screws draws scrutiny
How to lose a PH genius: Wesley So officially a US citizen
MOST READ
US lays out list of aid to ‘satisfy’ Duterte following VFA payment demand
How to lose a Filipino genius: Wesley So officially a US citizen
Robredo on Sara Duterte leading poll surveys: Why are Filipinos drawn to leadership of this kind?
Kris Aquino dispels rumors on son Josh getting married, thanks Ogie Diaz for defending him
Don't miss out on the latest news and information.