Istanbul’s Hagia Sophia opens as a mosque for Muslim prayers 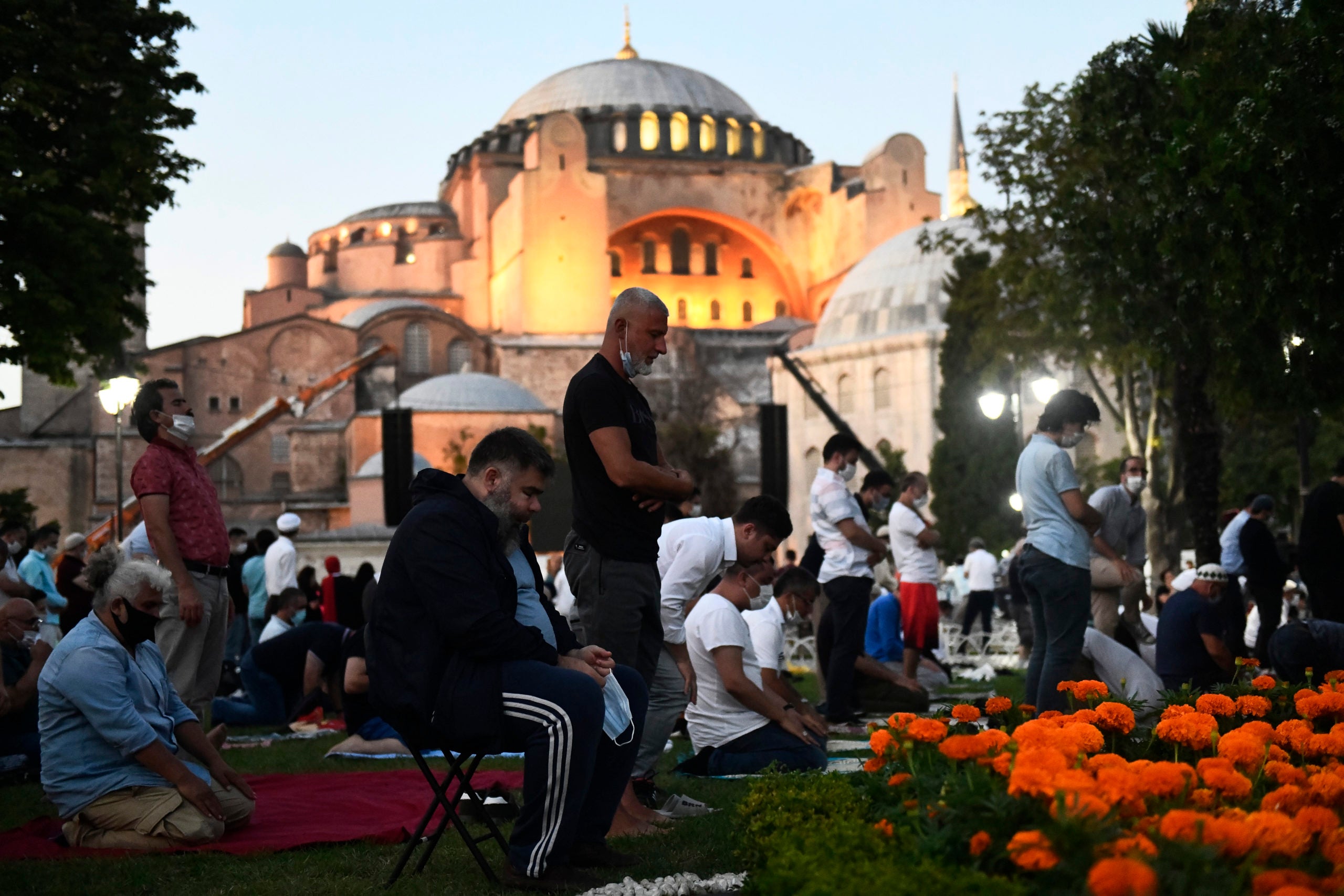 Muslims offer their prayers outside the Byzantine-era Hagia Sophia, in the historic Sultanahmet district of Istanbul, Thursday, July 23, 2020, a day before the first Muslim prayers in the landmark monument in 86 years following its conversion back into a mosque. The conversion of the edifice, once the most important church of Christendom and the “jewel” of the Byzantine Empire, has led to an international outcry. (AP Photo/Omer Kuscu)

ISTANBUL  — Hundreds of Muslim faithful were making their way to Istanbul’s landmark Hagia Sophia on Friday to take part in the first prayers in 86 years at the structure that once was one of Christendom’s most significant cathedrals, then a mosque and museum before its reconversion into a Muslim place of worship.

Turkish President Recep Tayyip Erdogan is scheduled to attend the inaugural prayers inside the sixth-century monument along with around 500 dignitaries, as he fulfills what he has described as the “dream of our youth” anchored in Turkey’s Islamic movement.

Thousands of men and women, including many who traveled from across Turkey, are set to perform prayers in segregated areas outside Hagia Sophia. Several camped near the structure overnight.

Orthodox church leaders in Greece and the United States, meanwhile, were scheduled to observe “a day of mourning” over the inaugural prayers.

Brushing aside international criticism, Erdogan issued a decree restoring the iconic building as a mosque earlier this month, shortly after a Turkish high court ruled that the Hagia Sophia had been illegally made into a museum more than eight decades ago. The structure has since been renamed “The Grand Hagia Sophia Mosque.”

The move sparked dismay in Greece, the United States and among Christian churches who had called on Erdogan to maintain it as a museum as a nod to Istanbul’s multi-religious heritage and the structure’s status as a symbol of Christian and Muslim unity. Pope Francis expressed his sadness.

Built by the Byzantine Emperor Justinian in 537, Hagia Sophia was turned into a mosque with the 1453 Ottoman conquest of Istanbul. Mustafa Kemal Ataturk, the founding leader of the secular Turkish republic converted the structure into a museum in 1934.

Although an annex to the Hagia Sophia, the Sultan’s pavilion, has been open to prayers since the 1990s, religious and nationalists group in Turkey have long yearned for the nearly 1,500-year-old edifice, which they regard as the legacy of Ottoman Sultan Mehmet the conqueror to be reverted into a mosque.

“This is Hagia Sophia breaking away from its captivity chains. It was the greatest dream of our youth,” Erdogan said last week. “It was the yearning of our people and it has been accomplished.” Erdogan also described its conversion into a museum by the republic’s founding leaders as a mistake that is being rectified.

In New York, the Greek Orthodox Archdiocese of America called the inaugural prayers a “cultural and spiritual misappropriation and a violation of all standards of religious harmony and mutual respect.” It called on the faithful to observe a day “of mourning and of manifest grief.”

Archbishop Elpidophoros of America held a meeting with U.S. President Donald Trump and Vice President Mike Pence in Washington on Thursday to discuss concerns over the reconversion.