US watchdog to probe use of force in Portland; fed agents to Seattle on standby | Inquirer News
Close
menu
search

US watchdog to probe use of force in Portland; fed agents to Seattle on standby

PORTLAND, Oregon — The U.S. Justice Department announced on Thursday it would investigate the use of force by federal agents against protesters in Portland, Oregon, following another night of unrest in which the city’s mayor was tear-gassed. 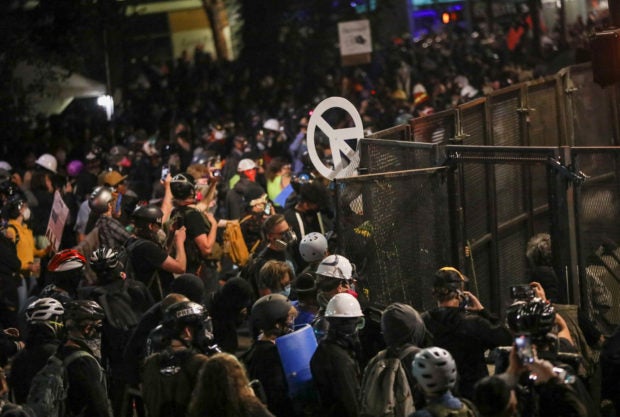 Protesters gather outside a reinforced fence installed outside the Mark O. Hatfield United States Courthouse during a demonstration against the presence of federal law enforcement officers and racial inequality in Portland, Oregon, U.S., July 23, 2020. REUTERS/Caitlin Ochs

The investigations, which follow an uproar over the deployment of federal border patrol officers to Portland against the wishes of local officials, come as the Trump administration said it was sending a similar contingent to Seattle.

The White House did not immediately comment on the announcement.

The Federal Protective Service, which is in charge of protecting federal buildings and monuments, said agents from the U.S. Customs and Border Patrol would be on standby in Seattle to protect federal property if needed.

“The CBP team will be on standby in the area, should they be required. FPS requests this kind of assistance multiple times a year at our over 9,000 facilities across the country,” FPS said in a statement.

Seattle police on July 1 dismantled an “autonomous zone” that protesters maintained for weeks around a city police station during protests against racial injustice sparked by the death of George Floyd in police custody in Minneapolis on May 25. President Donald Trump criticized Democratic officials in Seattle and Washington State for failing to clear the area earlier.

More protests are planned this weekend in Seattle’s Capitol Hill neighborhood, where the autonomous zone was.

The deployment of federal agents in Portland last week is a flashpoint in what demonstrators and local officials see as a political ploy by Trump to drum up a “law and order” campaign as he faces an uphill re-election battle.

Late Thursday, a federal judge in Oregon issued a temporary restraining order barring the agents from arresting or using force against journalists and legal observers.

Security forces have frequently tear-gassed and clubbed demonstrators during the unrest and Wheeler, visiting the protest site outside the federal courthouse in downtown Portland, urged that federal agents be withdrawn from the city.

Wheeler, a Democrat, has called the intervention an abuse of federal power and said it was escalating the violence. The past week has seen bigger and bigger crowds of supporters joining the demonstrations.

But Wheeler, also the city’s police commissioner, was jeered by demonstrators, and some threw water bottles at him, calling on him to resign and chanted “Shame on You.” Some said he should have done more to protect Portland’s citizens.

Wheeler, wearing a surgical mask and goggles, then experienced two rounds of heavy tear gas, a Reuters reporter at the scene said. His eyes and nose were running, his face was red and his eyes were bloodshot.

Last week, protesters said uniformed personnel without name tags or agency badges snatched young people off the streets into unmarked vans before eventually releasing them. It remains unclear what that operation was intended to do, but it failed to dent the enthusiasm of the protesters.

Hundreds of women calling themselves a “wall of moms” and wearing bike helmets and yellow T-shirts appeared among the protesters following those reports.

Carrying signs like “Feds stay clear. Moms are here,” and “I’m so disappointed in you – mom,” the women have been shoved and tear-gassed by agents. Some older men have also joined, bringing leaf blowers to blow away tear gas.