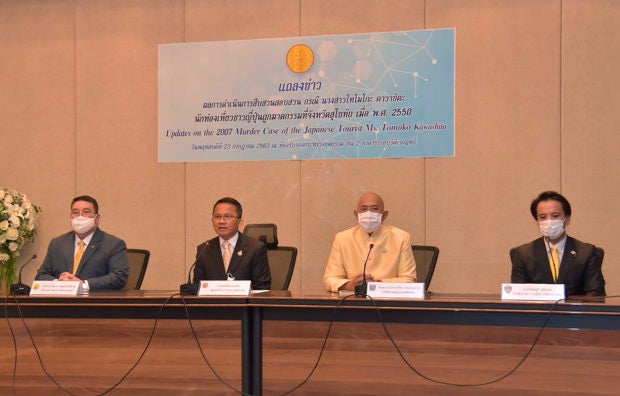 In this photo released by Thailand’s Dept. of Special Investigation, Thailand’s Justice Minister Somsak Thepsuthin, second left, leads a press conference Thursday, July 23, 2020, in Bangkok, Thailand. Somsak announced that a possible breakthrough in the unsolved 2007 killing of a Japanese tourist. The body of Tomoko Kawashita was found by the ruins of an ancient temple in the northern province of Sukhothai on May 25, 2007. From left: Wannapong Kocharak, director of Central Institute of Forensic Science; Somsak Thepsuthin, minister of Justice; Korawat Panrnprapakorn, DSI secretary-general; Tomoyuki Fujiyama, Japan embassy’s first secretary. (Thailand’s Dept. of Special Investigation via AP)

BANGKOK — Improved DNA testing has shed new light on the unsolved murder of a female Japanese tourist 13 years ago, suggesting a link to a male of East Asian heritage, Thai officials said Thursday.

Justice Minister Somsak Thepsuthin said the Department of Special Investigation has informed Japanese officials of the finding that might help identify the killer of Tomoko Kawashita. He said a DNA sample found on the clothing of the 25-year-old victim has been identified as belonging to an East Asian man.

A Japanese man who was seen entering Thailand with Kawashita was initially a person of interest to Thai police but left Thailand soon after the killing. He was not officially named as a suspect.

Kawashita’s body was found near the ruins of an ancient temple in the northern province of Sukhothai on May 25, 2007. Police said she was stabbed and her belongings taken. They collected DNA samples from Thai men living in the area who were also interrogated.

After Sukhothai police failed to make any progress in the case, it was transferred in 2013 to the Department of Special Investigation, Thailand’s version of the FBI. They extended the search for the culprit, interrogating more people and doing more work with DNA.

DNA samples were taken from 379 Thai men in the course of the investigation.

“But all of them did not match with the DNA found on the victim’s pants, therefore, we had to alter our investigative techniques,” Somsak said at a news conference.

Wannapong Kocharak, director of the Central Institute of Forensic Science, explained that more advanced methods of DNA testing were then utilized.

“With the new method, we can pinpoint that the DNA we found on the pants of the victim was not the DNA of Thai men. It matched with men from East Asia in the global genetic database that we can access with the help of Thai geneticists,” Wannapong said.

Somsak told reporters that he wants to ask Japanese authorities to collect DNA from the Japanese man who was seen with Kawashita.

“At that time, he refused to cooperate in giving tissue samples for lab tests and left Thailand one day after her body was found. We can start with checking his DNA sample in the next phase of the investigation that will be a collaboration between the two countries,” Somsak said.

Tomoyuki Fujiyama, a representative of the Japanese Embassy who also spoke at the news conference, said the victim’s family will be informed of the development and the embassy will cooperate fully with Thai authorities.