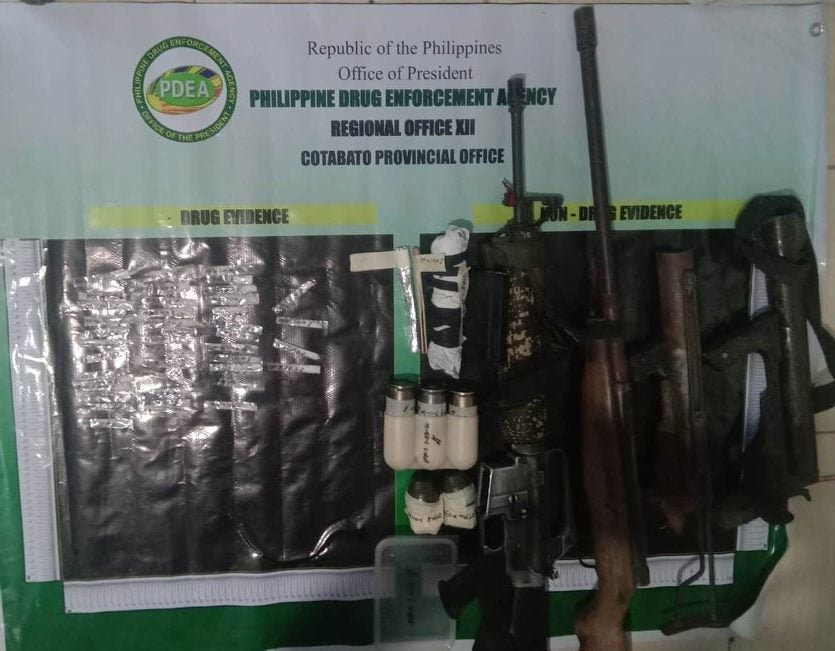 The items seized during a dawn raid in Pikit town of Cotabato province. PHOTO COURTESY OF PDEA

PIKIT, COTABATO—Two drug suspects cornered in an anti-drug operation at a village here early on Thursday (July 23) were killed after they fought back, or nanlaban, and were shot by a law enforcement team composed of police, Army and anti-narcotics agents.

Capt. Mautin Pangandigan, Pikit police chief, said law enforcers were serving a search warrant on Mutalib Bulod in his home at the village of Manaulanan around 2:20 a.m.

Pangandigan said Mutalib and his companion, Asty Guiamalon Bulod, shot at the law enforcement team, leading to a gunfight that led to the suspects’ killing.

The search warrant against Mutalib was for illegal drugs, issued by Judge Lily Lydia Laquindanum, of Regional Trial Court Branch 24 in Midsayap, Cotabato.

Recovered from Mutalib’s house were 42 sachets containing shabu, or crystal meth, weighing 10 grams with an estimated street value of P68,000.

The drugs and firearms are now in the custody of the Philippine Drug Enforcement Agency (PDEA), said Pangandigan.

Read Next
Probe on PCOO’s alleged ‘editing out’ of portions of Duterte’s speeches sought
EDITORS' PICK
Next level mobile photography within reach with vivo X70 co-engineered with ZEISS
Sara flies to Cebu, raises speculation of meeting with Bongbong
Nurses’ exodus: Hailed as heroes, treated like peons
Leaked: A 60x Zoom and all-new Helio G96 mean a complete overhaul for TECNO Mobile’s new CAMON 18 series
Delivering delight against all odds
The malady of food waste: Millions starve as trash bins fill with leftovers
MOST READ
Sara flies to Cebu, raises speculation of meeting with Bongbong
Villar blurts out expletive during Agri budget hearing
In U.N. showdown over Xinjiang, China says ‘lies still lies’
‘Wala nang atrasan’: Pangilinan not backing out of VP race after ‘explosion’ of support
Don't miss out on the latest news and information.