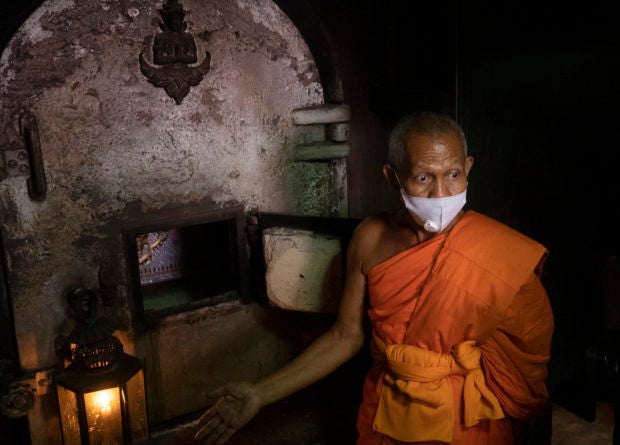 A Buddhist monk talks to media after putting the coffin of the infamous Si Ouey into an incinerator for cremation at Wat Bang Phraek Tai temple Nonthaburi province, Thailand, Thursday, July 23, 2020. The corpse of Si Ouey, a notorious figure who was convicted of murder in 1959 and accused of cannibalism, was put on museum display for six decades, but an online campaign last year was successful in having him be given a proper funeral. (AP Photo/Sakchai Lalit)

NONTHABURI, Thailand — For decades, some Thai parents warned their naughty children that if they didn’t behave, Si Ouey would come to eat their livers.

If the threat of a ghostly visit from the executed child killer, long called a cannibal, proved ineffective, those children could always be taken to see Si Ouey. After all, his mummified corpse — gnarled and blackened — for years stood on display in a glass case in the Forensic Museum at Bangkok’s Siriraj Hospital.

In recent years, however, doubts were raised about whether the man called Thailand’s first serial killer was given justice and a campaign was launched to at least give him a proper funeral. On Thursday, six decades after his execution, that finally happened.

Nine Buddhist monks at a temple north of Bangkok chanted prayers and paper flowers were placed in front of Si Ouey’s coffin, which was then moved to the crematorium, where the head of the Corrections Department lit the fire. Hospital officials as well as residents of a town where he once lived looked on.

Si Ouey, a Chinese immigrant who worked as a gardener, was reportedly caught red-handed in 1958 in a forest in Rayong province burning the body of an 8-year-old boy who had disappeared on an errand.

Police were quick to pin on him at least five previous unsolved murders of children dating back to 1954, some in other provinces. Lurid newspaper accounts detailed how he supposedly relished eating their hearts, livers, and intestines.

Si Ouey was said to have told police that he acquired a taste for human flesh during World War II when as a Chinese soldier in a unit besieged by the Japanese, he survived by eating the bodies of those killed in battle.

He was tried and found guilty of murder and executed by firing squad on September 16, 1959. He was 32.

His body was then handed over to Siriraj Hospital for what was described as a medical study. His story soon became a regular staple of horror books and B-movies.

The truth about Si Ouey’s case, however, is difficult to confirm.

Police at the time had a reputation for beating confessions out of suspects, and popular newspapers dished out tabloid-style sensationalism.

Si Ouey was also at a disadvantage because he was a poor immigrant, arriving from China in 1946 at age 19. Thailand’s military governments at the time were keen to stir up anti-Chinese sentiment in the Cold War atmosphere and often blamed immigrants for crime and unrest.

Doubts about Si Ouey’s guilt only garnered much interest in the past decade, after several television documentaries pointed out discrepancies in the evidence, such one of his victims still having her organs despite Si Ouey’s confessing to eating them.

Pharaoh Chakkraphattranan, who heard the warnings about Si Ouey as a boy, saw one of those programs and it led him in 2018 to start an online petition asking that Si Ouey no longer be labeled a cannibal and that he be given a proper funeral.

“I went back to that museum and I felt different looking at him,” Pharaoh said. “Before I just thought I was looking at a man-eater, now I see a victim who was stripped of his rights and dignity. Whether or not he committed the crime, his body shouldn’t be displayed in the glass box.”

Siriraj Hospital reviewed the matter last year, removed the sign on his display case calling him a “cannibal” last June, and then withdrew his body from public view last August. Officials finally announced this month that he would be cremated.

Wannapa Thongchin, whose parents employed Si Ouey, also embraced the cause and along with other residents of the town where he once lived lobbied for a proper funeral. She said her parents always told her Si Ouey was innocent.

“Even though he was not our family member, we counted him as one,” Wannapa said Thursday at Si Ouey’s funeral. “Villagers spoke of him as a good person. It made me feel sorry for him. It was as if he was being tormented, so we had to find a way to bring him out from the glass box.”