Accusations of spying behind closure of Chinese consulate in Houston 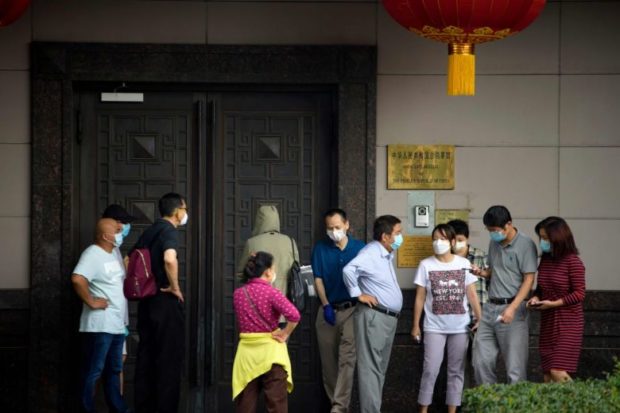 People attempt to talk to someone at the Chinese consulate in Houston on July 22, 2020. AFP via The Straits Times/Asia News Network

WASHINGTON — Lawmakers and diplomats in Washington alleged on Wednesday (July 22) that Chinese espionage attempts were behind the Trump administration’s ordered closure of the Chinese consulate in Houston.

The New York Times quoted Mr David Stilwell, the top US diplomat for East Asia, as describing the Houston consulate as the “epicentre” of research theft by the Chinese military in the United States, without giving details to support the claim.

Mr Stilwell, the US Assistant Secretary of State for East Asian and Pacific Affairs, told the NYT that the Houston consul general and two other diplomats had been recently caught using false identification to escort Chinese travellers to the gate area of a charter flight in Houston’s George Bush Intercontinental Airport.

In a sharp escalation of tensions between the US and China, the Trump administration notified China on Tuesday that it had withdrawn its consent for China to operate its consulate in Houston, Texas.

The consulate was given 72 hours to close, according to a tweet from Mr Hu Xijin, the editor of China’s Global Times newspaper, in the early hours of Wednesday. Hours before, Houston media reported that papers were being burnt in the consulate’s compound in open containers.

China has vowed to retaliate, and Reuters reported that America’s consulate in the city of Wuhan may be closed in response.

The decision to close the consulate was made due to a growing number of disputes in the US-China relationship, said Deputy Secretary of State Stephen Biegun at a Senate Foreign Relations Committee hearing on Wednesday.

“We find the US-China relationship today weighed down by a growing number of disputes,” said Mr Biegun, the second highest-ranking official in the State Department.

These disputes included commercial espionage and intellectual property theft from American companies, which State Department spokesman Morgan Ortagus had earlier said in a statement was behind the closure.

Other disputes involved the unequal treatment of American diplomats and businesses by Chinese authorities, and the theft of sensitive technology and research from American universities to advance China’s own military.

“It is these factors which led the President to direct a number of actions in response, including yesterday’s notification to the PRC that we have withdrawn our consent for the PRC to operate its consulate in Houston, Texas,” said Mr Biegun, referring to China by its official name, the People’s Republic of China.

Republican senator Marco Rubio of Florida, a vocal China critic, was more specific, accusing the consulate of being a “massive spy centre”.

“China’s consulate in Houston is not a diplomatic facility. It is the central node of the Communist Party’s vast network of spies and influence operations in the United States,” he said on Twitter, also without citing evidence to back up his claim.

Mr Rubio told Fox Business in an interview that the consulate also used agents, including businessmen, to try to influence members of Congress and other political leaders at the state and local level.

Mr Rubio said that he expected the Chinese to respond reciprocally and close one of America’s diplomatic facilities in China, likely in the city of Wuhan.

There are six US diplomatic missions in mainland China: Chengdu, Guangzhou, Shanghai, Shenyang, Wuhan, and the embassy in Beijing.

China watchers and some lawmakers viewed the Trump administration’s decision as a calculated escalation of tensions, questioning the broader strategy behind doing so.

“The normal response to espionage is to expel the individuals involved. Closing a consulate is a very dramatic step,” said Mr Patrick Chovanec, an adjunct professor at Columbia University’s School of International and Public Affairs, on Twitter. “How it is viewed – beyond the China hawk cheering gallery – will depend on the information the US is willing to share on how it came to this decision.”

Senator Bob Menendez of New Jersey, the ranking Democrat on the Senate Foreign Relations committee, said at the beginning of Wednesday’s hearing: “I understand the importance of being tough with China. But being tough is the means, not the ends.

“I want to understand better not just the tactical considerations, but how this measure advances our strategy,” he added. “What is the effect we expect this to have on China’s behavior? When China “retaliates,” as they have said they will, what will be our next move?”