NEW YORK — Police in riot gear raided an encampment of protesters and homeless people near New York’s City Hall before dawn Wednesday, clearing out the camp that formed a month ago to push for budget cuts and other changes to the nation’s largest police department. 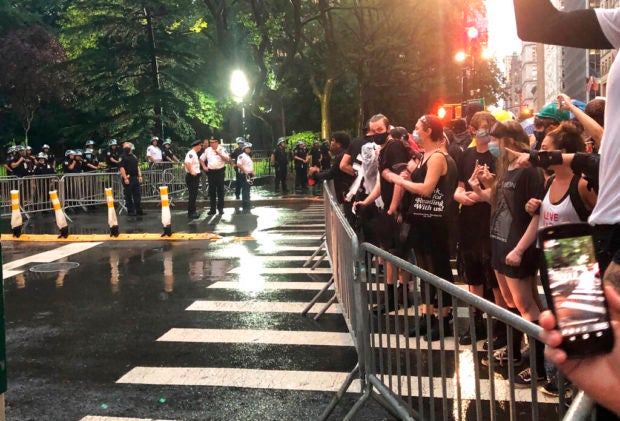 Protesters supporting Occupy City Hall stand behind barriers as members of the New York City Police Department are staged on the other side, Wednesday, July 22, 2020, in New York. Scores of protesters marched in the rain to re-sound their calls to stop funding the police department and ultimately abolish it. AP Photo/Jennifer Peltz

A line of New York Police Department officers with helmets and shields entered City Hall Park shortly before 4 a.m. and forced out what officials said were about 50 people, many of them homeless, who remained at the encampment. The move spurred criticism from those involved in the camp for throwing away homeless people’s possessions and the camp’s supplies.

Mayor Bill de Blasio said the move was unrelated to President Donald Trump’s threats to send federal law enforcers to New York to take on protesters, as the Republican president has done in Portland, Oregon.

Speaking later in Albany, Democratic Gov. Andrew Cuomo said Trump told him by phone that he wouldn’t deploy extra federal law enforcement forces to New York for now, and that the two leaders would speak before any such action happened.

Video from the police raid at City Hall Park shows officers moving through the camp, taking down tents and other temporary structures and tossing them into garbage trucks to be hauled away. Cleaning crews arrived later to scrub graffiti from buildings in the area.

Police Commissioner Dermot Shea said officers instructed people to leave, let them do so and many did, but about six were given summonses for refusing to disperse. One person was arrested for throwing a brick at an officer, denting his shield, Shea said. The commissioner said that no injuries were reported and that there was “no real use of force,” though he said there was “some tugging and back and forth.” He called the episode “one for the win column … another step towards getting back to normalcy here in New York.”

But some protesters disputed Shea’s account, saying they didn’t hear a warning before police poured in, threw people’s possessions away and pushed them around.

“They tried to run us over with bikes,” Nene Thompkins, a 19-year-old woman living at the camp, told Gothamist. “They pushed us with shields. They told us we couldn’t be on the sidewalk so walk on the street, then as soon as we got on the street they ambushed us.”

De Blasio said shelter services were offered to homeless people at the encampment.

The encampment, sometimes called “Occupy City Hall” or “Abolition Plaza,” started in late June with several hundred people following weeks of protests sparked by the May death of George Floyd at the hands of Minneapolis police. The New York camp was part of a national “defund the police” movement seeking to redirect funds from policing to community needs like housing and education.

Protesters said they would camp out until the city reduced the New York Police Department’s budget by $1 billion. The City Council responded by passing a budget that shifts roughly $1 billion from the police department, but some activists criticized the funding cuts as cosmetic or insufficient.

De Blasio had earlier resisted calls to move the protesters.

The encampment was reminiscent of 2011’s Occupy Wall Street, when protesters against income inequality took over Zuccotti Park, a few blocks from City Hall. Police removed them after two months. De Blasio, who was then the city’s elected public advocate, criticized then-mayor Mike Bloomberg’s deployment of police to clear Occupy Wall Street.

De Blasio said Wednesday’s raid was different, drawing a distinction between Occupy Wall Street as “a protest situation” and the City Hall Park camp, which he characterized as having become “less and less about protests” and more a homeless camp where “health and safety issues came to the fore.”

People involved in the camp have said it served in part to demonstrate that the city was failing the homeless.

Scores of supporters of the Occupy City Hall demonstration gathered Wednesday evening in a thunderstorn at a different New York park to re-sound their calls for stopping funding of the police department and ultimately abolishing it.

Aaron Gamman said he had been at the encampment every day since it started, though he had gone home for the night by the time the raid happened.

In recent days, “it’s just been a spot for homeless people and a way for them to get food and clothes,” the 20-year-old film student said.

“The fact that the NYPD handled it with no care just goes to show why we were protesting them,” the native New Yorker said.