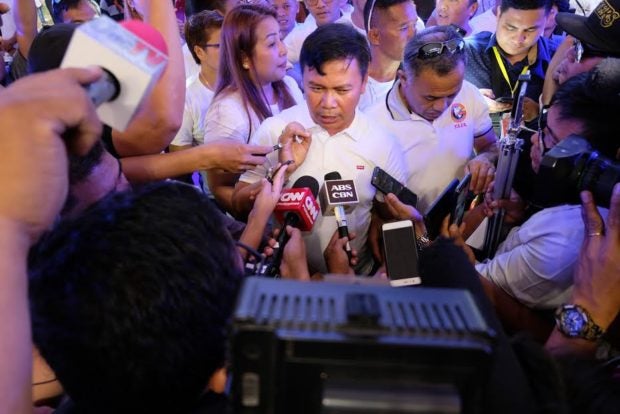 Puwersa ng Bayaning Atleta  (PBA) Party-list Rep. Jericho Nograles, who exposed Kapa’s investment scam to the public, said the government should also freeze Apolinario’s finances, which can be liquidated and used to refund his victims.

The Philippine National Police and the National Bureau of Investigation should likewise probe reports that the Kapa Ministry founder used dummies to “preserve his assets” and established “stash houses” to keep huge amounts of money.

“He still has lots of money and influence even after his arrest. I’m sure that he would use everything in his disposal just to free himself,” Nograles said in a statement.

“The PNP and the NBI should recover KAPA assets as much as they can so that the government can still refund some of the money from KAPA’s investors,”  he added.

Reports said Apolinario’s men opened fire at the team from the Surigao del Sur police that was serving the arrest warrant against the Kapa leader.

Two unidentified men were killed, and one of Apolinario’s men, Melecio Siano, was wounded in the ensuing gunfight.

Nograles said it appears that Apolinario is “building his own private armed group” after his group yielded high-powered firearms.

He added that he himself has repeatedly received death threats after he exposed the activities of Kapa.

“He is definitely not up to something good with all of these firearms and ammunition but I’m glad that this conman and some of his minions are finally behind bars. We must congratulate the PNP for finally bringing them in to face the charges,” Nograles said.