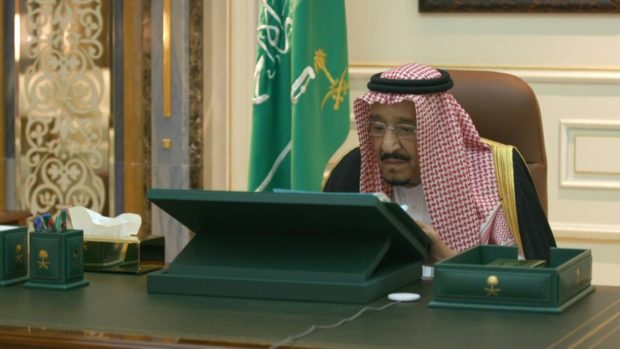 Saudi Arabia’s 84-year-old ruler King Salman holds a cabinet meeting via a video conference call from the King Faisal Hospital in Riyadh after he was admitted for a gall bladder inflammation, according to state news agency SPA. Image from AFP

The cabinet held a virtual meeting, chaired by King Salman “from his office at the King Faisal Specialist Hospital in Riyadh,” SPA said on Twitter.

The report was accompanied by footage from the spacious office in the hospital where the king presided over the meeting from behind a large desk.

He thanked all those who had enquired about his health, SPA said.

The 84-year-old monarch was admitted to the hospital on Monday “for some medical tests due to cholecystitis,” inflammation of the gall bladder, according to a statement issued by the royal court.

In the meeting, the cabinet discussed arrangements for the forthcoming hajj pilgrimage to Muslim holy sites in the city of Mecca.

The hajj has been vastly scaled back this year due to the novel coronavirus pandemic.

Saudi authorities initially said only around 1,000 pilgrims residing in the kingdom would be permitted for the hajj, but local media reports say as many as 10,000 will be allowed.

Some 2.5 million people from all over the world usually participate in the annual ritual.

It is rare for Saudi Arabia to report on the health of the aging monarch, who has ruled the world’s top oil exporter and the Arab world’s biggest economy since 2015.

In 2017, the kingdom dismissed reports and mounting speculation that the king was planning to abdicate in favor of his young son, Crown Prince Mohammed bin Salman, who is widely seen as the de facto ruler.

Under the king’s rule, Saudi Arabia has launched ambitious economic reforms for a post-oil era and given more rights to women, but also adopted a more assertive foreign policy and entered a war in neighboring Yemen.