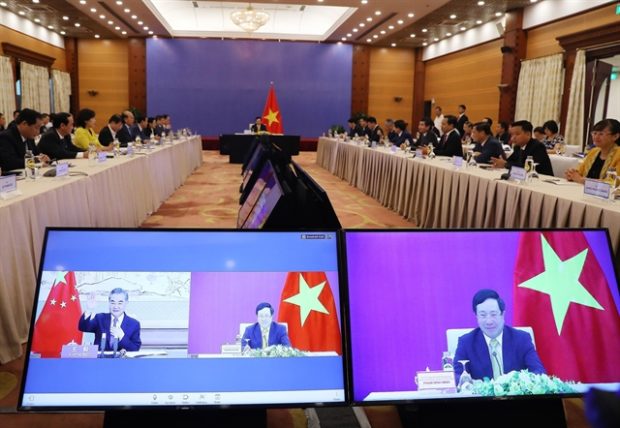 HANOI — Vietnamese Deputy Prime Minister and Foreign Minister Phạm Bình Minh has expressed concerns over the recent complicated developments over the South China Sea (known in Vietnam as the East Sea) with his Chinese counterpart Wang Yi on Tuesday.

The diplomat asks that the two countries better manage the sea dispute, refrain from acts that complicate the situation or expand the dispute, and asked that China fully respect the legitimate rights and interests of Vietnam, contributing to peace and security in the East Sea.

The maritime dispute between the two countries over the resource-rich sea was raised during the 12th meeting of the Steering Committee for Vietnam-China Bilateral Cooperation, held virtually on Tuesday.

The two foreign ministers agreed to abide by the high-level mutual understanding and agreement on basic principles guiding the settlement of maritime issues between Vietnam and China, comply fully with international law – especially the 1982 United Nations Convention on the Law of the Sea (UNCLOS), and promote negotiation mechanisms for maritime issues that would bring practical results.

However, the two sides have acknowledged the positive results attained through the past 10 negotiations on maritime delimitation and development cooperation conducted since the 11th meeting of the steering committee two years ago in HCM City, as well as acknowledging the bilateral cooperation’s achievements in less sensitive areas at sea.

The meeting drew the attendance of many ministerial leaders and local leaders of Hà Nội, Hải Phòng as well as seven border provinces.

At the conference, the two sides agreed that since the last meeting, Việt Nam-China ties had sustained a positive upward trend as high-level exchanges were maintained by flexible forms, with Vietnamese General Secretary and President Nguyễn Phú Trọng and his Chinese counterpart Xi Jinping communicating, exchanging letters and congratulatory messages.

It was noted that while bilateral trade had suffered considerable blows as a result of the pandemic but still within the first six months of the year, trade between the two sides posted a growth of 4.5 percent, while many Vietnamese products – notably milk and mangosteen – had officially reached the Chinese market for the first time.

Foreign direct investment (FDI) from China in 2019 ranked 7th out of 132 countries and territories currently investing in Việt Nam.

Before the coronavirus crisis, China had for many consecutive years dominated the number of tourist arrivals to Vietnam, while Vietnam was one of the Asean countries with the largest number of visitors to China.

The two sides had cooperated and supported each other in COVID-19 prevention and control efforts and carried out many activities on the occasion of the 70th anniversary of establishing diplomatic relations (1950-2020).

The meeting also discussed the long-standing issues regarding bilateral cooperation despite remedial efforts from both sides, such as Vietnam’s trade deficit with China, problems plaguing a number of Chinese-invested projects or Chinese contractors in Vietnam, and the disbursement or implementation of concessional loans and grants from China to Vietnam, though interested by both sides, had progressed slowly.

At the meeting, the two sides identified and discussed with depth some key tasks in the future to promote the sustainable development of the comprehensive strategic cooperation partnership between Vietnam and China.

The two sides agreed to promote high-level visits when conditions permit, but maintain contacts in appropriate manner while the pandemic situation remains complicated.

Vietnam and China also concurred to enhance effective cooperation between the two Communist parties; promote the role of the two foreign ministries in coordinating and deepening bilateral relations; implement cooperation mechanisms in the fields of defense, security and law enforcement; and exchange experiences and carry out cooperation regarding COVID-19 prevention and control.

The two also agreed to work on resuming commercial flights between Việt Nam and China to facilitate travel and flow of goods and services.

The two countries agreed to continue promoting cooperation in the field of economics, trade and investment in a sustainable manner.

The two countries have managed to maintain border economic activities, even during the pandemic.

The two sides agreed to strengthen coordination in border management and protection, strictly comply with the provisions of three legal documents on land borders and related agreements.