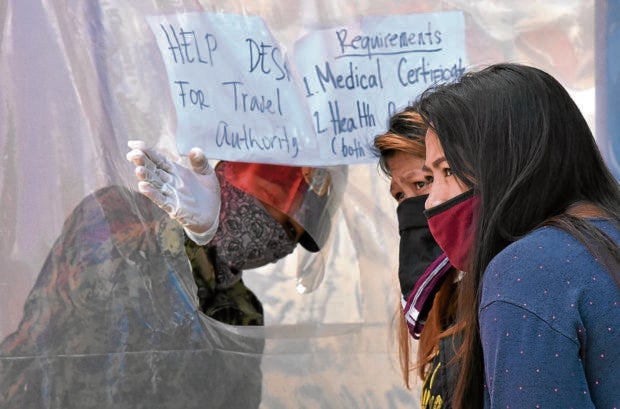 HEALTH CLEARANCE Securing a health clearance has become necessary for people leaving or returning to Baguio City as the local government tries to contain the spread of the coronavirus. —EV ESPIRITU

La Union Gov. Francisco Emmanuel Ortega III issued an executive order isolating Caba, which reported eight new cases, from July 21 to July 25. The order may be revoked or extended at the discretion of the regional Inter-Agency Task Force for the Management of Emerging Infectious Diseases (IATF).

Ortega said the shift to ECQ from a modified general community quarantine (MGCQ) would prevent surrounding towns from getting infected.

The regional IATF also approved the request of Ortega to place San Fernando City under ECQ from July 21 to July 31.

A 67-year-old man from Barangay San Agustin in San Fernando City died of COVID-19 on July 19 while another resident, a 16-year-old girl, tested positive for the virus.

Two residents of Barangay Tanqui, also in San Fernando, tested positive for the virus. Both showed no symptoms of the disease after they were exposed to a confirmed positive case.

Fifty-seven cases had been recorded in La Union since March.

In Pampanga province, laboratory tests cleared 12 mayors who were exposed to Candaba Mayor Rene Maglanque during the meeting of the Pampanga Mayors’ League with education and social welfare officials on July 13. Maglanque had tested positive for the virus.

The test results of three other mayors present in the July 13 meeting have yet to be released.

In Bulacan province, the number of COVID-19 cases rose to 1,089 as of Sunday, prompting authorities to consider imposing zoning or localized lockdown based on the assessment of local governments. The City of San Jose del Monte recorded the most number of cases with 219.

In Baguio City, officials planned to put up new isolation rooms for suspected COVID-19 cases in 128 villages, as new infections rose to 17 on Monday.

Villamor Drive in Barangay Lualhati was placed on lockdown starting Tuesday until further notice after a 46-year-old woman who lived in a condominium there contracted the virus.